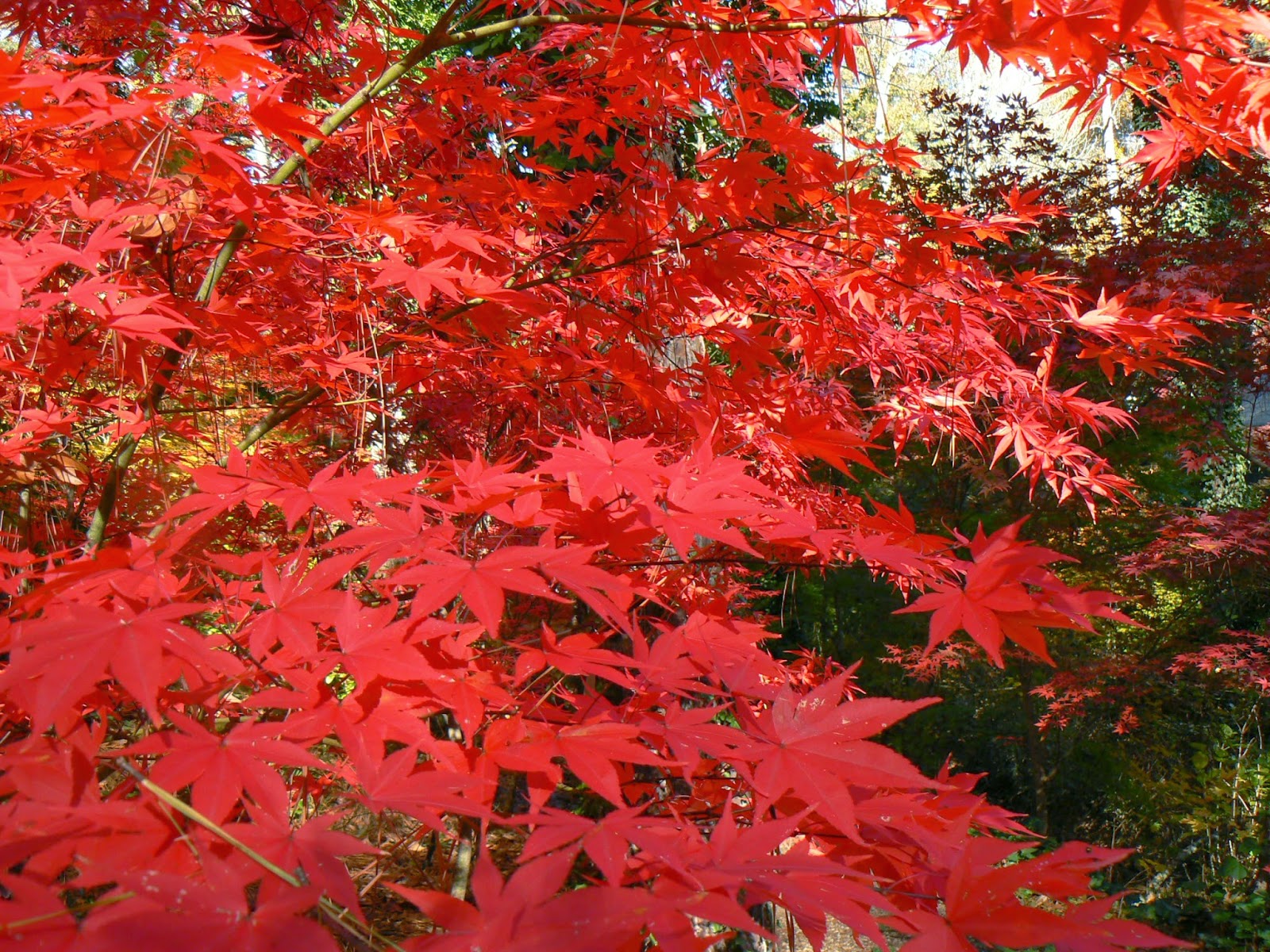 For a very short time (and never again), I wrote copy for a charity's auction catalogs, describing items that were being offered.  It was grueling work for me.  For that sort of writing, you're either on the bus or off.  I was definitely not on board.

The volunteer job was to come up with words and phrases that would make the objects tantalizing and persuade people to bid.  After several attacks of writer's block, I was able to move laboriously from one item to another.

But, when I got to a watercolor rendering of some poppies, I didn't hesitate.  I knew at once how I would describe the color of the flowers.

When we were shooting the pilot for A Gardener's Diary on HGTV (Home & Garden Television),  Ruth Mitchell, who had this most wonderful cottage garden that went on for acres, was great on camera.  As a result, Kathryn (the other executive producer) and Erica (the host) and I adopted "Ruth talk" for years.

Our favorite was "lipstick red."  That's how Ruth described the bright red Flanders Field poppies that grew in her garden.  From then on, every red object or flower we came across, we would assess its properties as to whether it was "lipstick red" or not.

I must say that this photograph taken in Bill Hudgins' garden looks more like Christmas red than lipstick red.   I haven't bought any lipstick in at least 30 years (not that I don't need it, but whatever I buy turns dark red on my lips, and I look like vampiress), so I don't really pay attention anymore to that sort of thing.  In high school, though,  I wore "Persion Melon" just because it was the favorite of some movie star.

While I'm veering off the subject here, one unrelated note about describing colors.  When my older daughter moved to New York in September 2008, at possibly the worst time in history (or maybe since the 1930's), she was doing free-lance writing for magazines while looking for permanent work at one.  This proved difficult, because she would excitedly land a second interview only to find out that the publication had folded.

Anyway, I went up there to help her get settled.  She was swamped with deadlines and had gotten stuck on one paragraph for a national shelter magazine.  In the article, a woman had a rustic house, but had not gone with the usual country, muted colors you'd expect.  Instead, she had lime greens and corals and lemony yellows.  My daughter grew more and more frantic,  struggling for the right word for what I thought an odd choice for that type of house.  As the deadline loomed, and my daughter was in tears, all of a sudden I revved up my failed catalog voice to come up with "fruit punch" colors.  The editor loved it.  I can't even say how many times my daughter and I have made jokes about it ever since.  Any item is fair game to be labeled a "fruit punch" color.

But, back to the Japanese maples.  It is usually the last of October and the first two weeks of November that the leaves are at their peak.  If you have enough of them, it's like a veritable explosion in the forest. I mentioned in yesterday's blog that Bill Hudgins has over the years selected seedlings to grow out in containers.  From these, he has chosen ones for their fall and spring colors.  Again, they're not named varieties, but they have many of the characteristics of the most popular cultivars.

Stats:  Bill is selling 3-gallon trees for $18 each, less if you buy in quantities.  I'm sure he has some in his collection that qualify for the description of "Lipstick Red."  Or, some are so translucent in the sunlight, they could be called "Hawaiian Punch."  I like the orange and yellow ones, but I haven't come up with names for those yet.  Comparing these beautiful, refined leaves to Gatorade or Orangina is just not right, even for an auction catalog.

Posted by Martha Smith Tate at 8:09 AM