Evolution and (unwanted) revolution in the garden 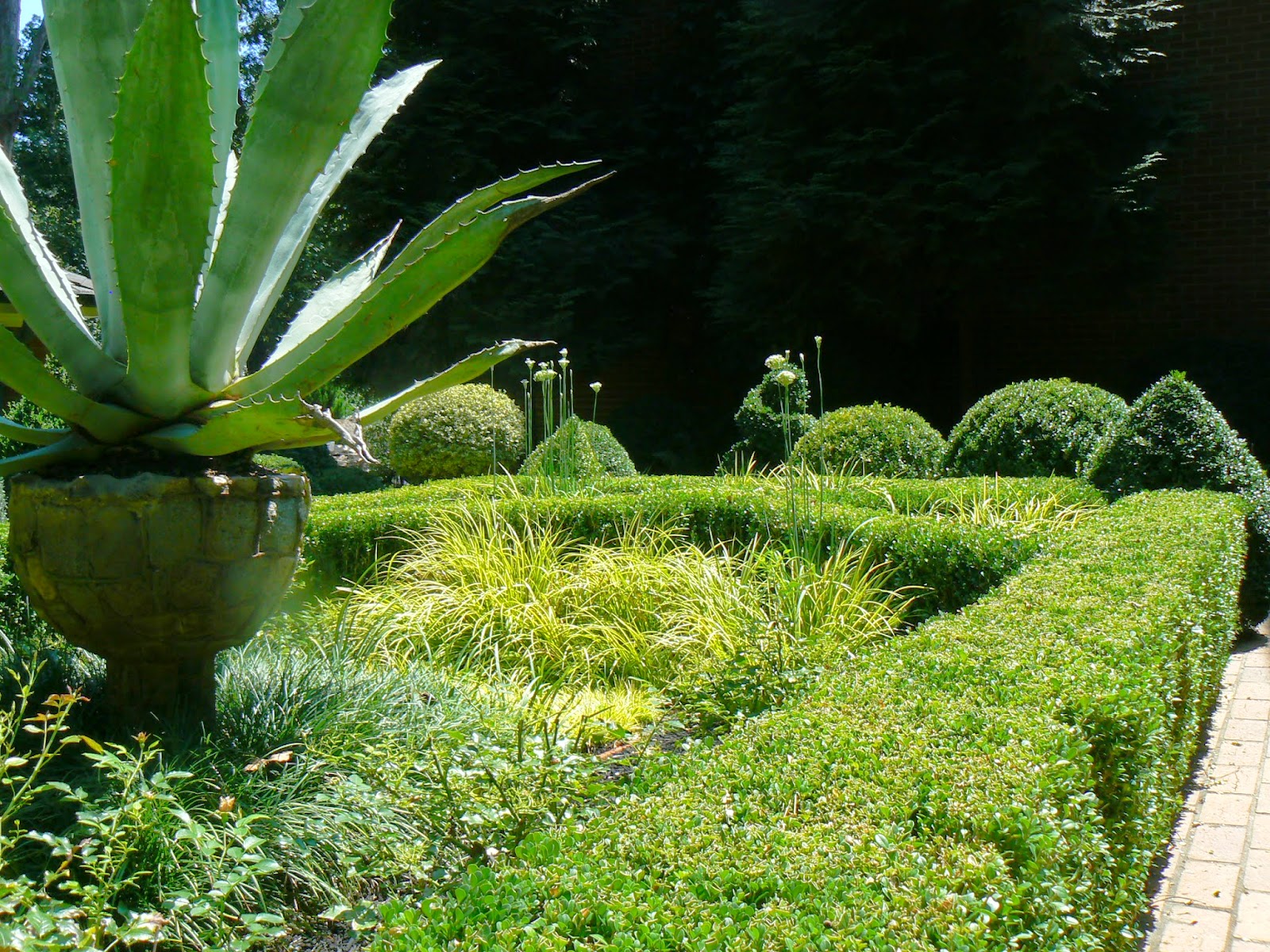 Something happened yesterday.  The man who tends the garden above appeared at my house in mid-morning, asking if I needed any work done.  He had finished a project in the pictured garden, which started out as large boxwood parterres (this being the largest) filled with seasonal flowers, clipped bay trees, roses and on and on.  Apparently, as the owner added other areas (like a fenced-in cutting garden, a chicken coop and an area for designer goats), the parterres were simplified.  This one is still beautiful, but in a different, more serene way.  The garden has evolved over time in an unexpected direction.

Back at my house, I was thrilled to have some help.  It's so rare that this man has any time, given the demand for his services.  A few weeks ago, he had brought some of my cobblestones from the farm, in anticipation of adding a small garden area opposite the arch garden.  This new, undeveloped triangular space is where this same man planted my mother's purple hydrangea and a boxwood.  On one side is a wild magnolia that separated the area from my bird feeding operation.  The branches of the magnolia came almost to the ground (you had to duck to get under them), but they were where the cardinals, who had basically taken over the feeders, perch awaiting their turn.

So, I had been doing something in the house (another man who came with him was pressure washing the concrete deck, which desperately needed it), when I walked out to talk about the new space.  I almost fainted.  The man had limbed up the magnolia, so much so that I had to look up at the branches.  My heart sank.  The deed was done.  Where were the cardinals going to gather and be protected from the eyes of hawks?  Not to mention, that the space looked so bare and exposed now.

"Plants won't grow here if you don't let sunlight in," he explained. "You have a boxwood in one corner, and you need two more here and here.  This way you'll have enough light to have a little garden."

He was right about that.  Nothing could have grown under those magnolia branches.  Also, he couldn't cut one side of the tree and leave the other.  Still, I went out this morning to feed the birds, having imagined last evening that not nearly as many showed up, and it all still looks so bare to me.

This incident is like so many others that have happened to me and to anyone with a garden and occasional help.  You don't anticipate that someone would go off on a notion of their own.  I couldn't have dreamed that this man would have cut all those magnolia branches.  Just wouldn't have crossed my mind.  I think it was last year that 98-year-old Margaret Moseley went out with a helper to show him a branch of a camellia that had grown over some other plants.  She wanted only that one limb removed.  Later, she went out to discover that the entire six-foot-tall bush had been cut to the ground.

So, I'll trust that the man is right, that I couldn't have grown anything along the cobblestone border he put in where the magnolia had blocked the light.  My neighbor came by after he had gone and said she thought the cardinals would adjust.  They can still perch in the magnolia, but it will be much higher.  And, they still have the osmanthus, the shelf rock and a small weed tree I keep trimmed for them as a perch.  I've noticed, though, that this new arrangement has emboldened the chickadees and the titmice.  They're the ones dominating the feeders this morning.

Back to the positives.  I can now have two more boxwoods which will tie the new space to the arch garden directly across the path.  I'm also comforted by the thought that the woman who owns the magnificent garden shown above puts all her faith in this man.  He is the sole keeper of her huge yard and probably uses his own intuition a lot of the time.  I think once I get over the shock of the bareness, I'll be glad it happened.  I'm always grousing about not having enough sun.  Now, at least in this little corner, that won't be the case.