Another garden mystery unlikely to be solved 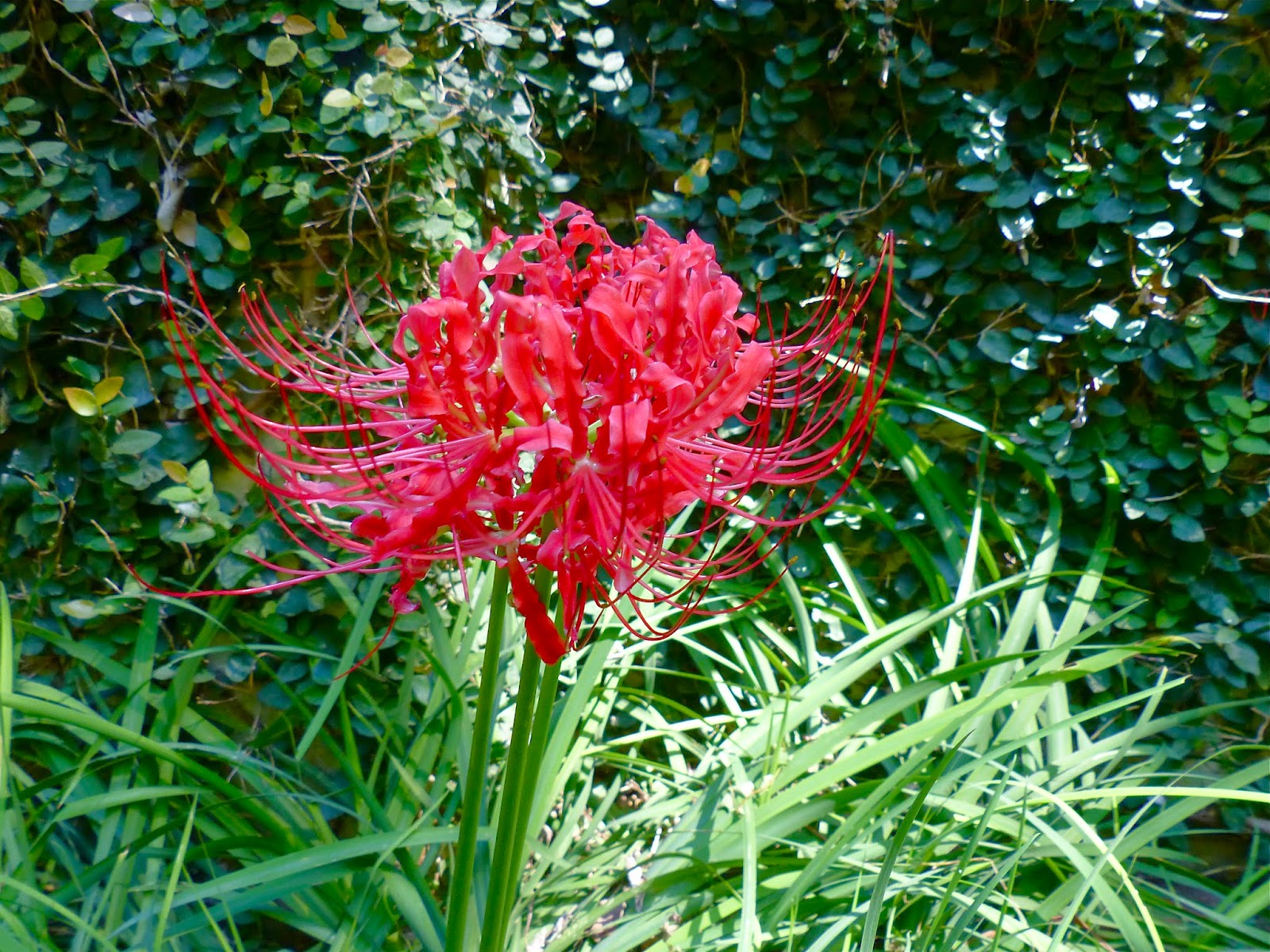 In September of last year, I wrote a post about a yellow lycoris that popped up seemingly out of nowhere at my house.  If you type "yellow lycoris" in the search box at the top, you'll pull up the blog dated September 27, 2013.  That single stalk was next to a narrow path that leads to my brush pile.  It could have flowered there before, but I don't think so.  I go back there fairly often and would have seen it in some stage of bloom.

I wrote on that day that I wouldn't have been too surprised if it had been a red spider lily (Lycoris radiata).  I have a few at the little house that someone planted long ago.  Also, they're just not that rare.  I've been seeing them around in yards for at least a month now.

But, I'm retracting that statement.  I certainly was taken by surprise.  About a week and a half ago, I walked outside my basement door where I saw these three stalks blooming together.  They came up in a patch of Siberian iris Priscilla Glass gave me over 30 years ago.  I am positive that these flowers have never bloomed here before.

So, now I'm wondering.  I used to order things from the ads in the Farmers and Consumers Market Bulletin, published by the Georgia Department of Agriculture.  Sometimes, if I ordered a bulb, it would be so small that I had no hope of its maturing until I was in my sunset years.  That wasn't always the case, but it did happen a few times.  I would be lucky to have foliage come up eventually;  many just never flowered and then altogether disappeared.

I am trying to figure out if indeed a tiny bulblet could have been contained in the soil of Priscilla's gift, and it took 32 years to mature to a blooming size.  I am over a 150 yards, maybe even 200 yards, away from the little house.  I have some pink naked ladies (Lycoris squamigera) up there that bloom in July.  There's never been a lycoris up here except for said yellow one that was nowhere to be seen this year (when I went looking for it a couple of weeks ago, I did find a splintered, rotten limb near or maybe right on top of the place where it had appeared last year;  nothing could have gotten up through all that;  I cleared it all out, but still no yellow surprise).

I'm tempted to call up Priscilla and ask her if she has ever had red spider lilies.  But, am I foolish to think it would take over 30 years for a tiny bulb to grow to blooming size?  Those bulbs aren't all that large, anyway.

I think this occurrence will remain a mystery.  This coming winter, I'll look for some strappy leaves to appear.  The Siberian iris pretty much die down then, so I think I'll know.  I don't dare divide and disturb them, because I won't be able to wait another 30 years to see them flower again.