The prettiest coleus in Brooklyn 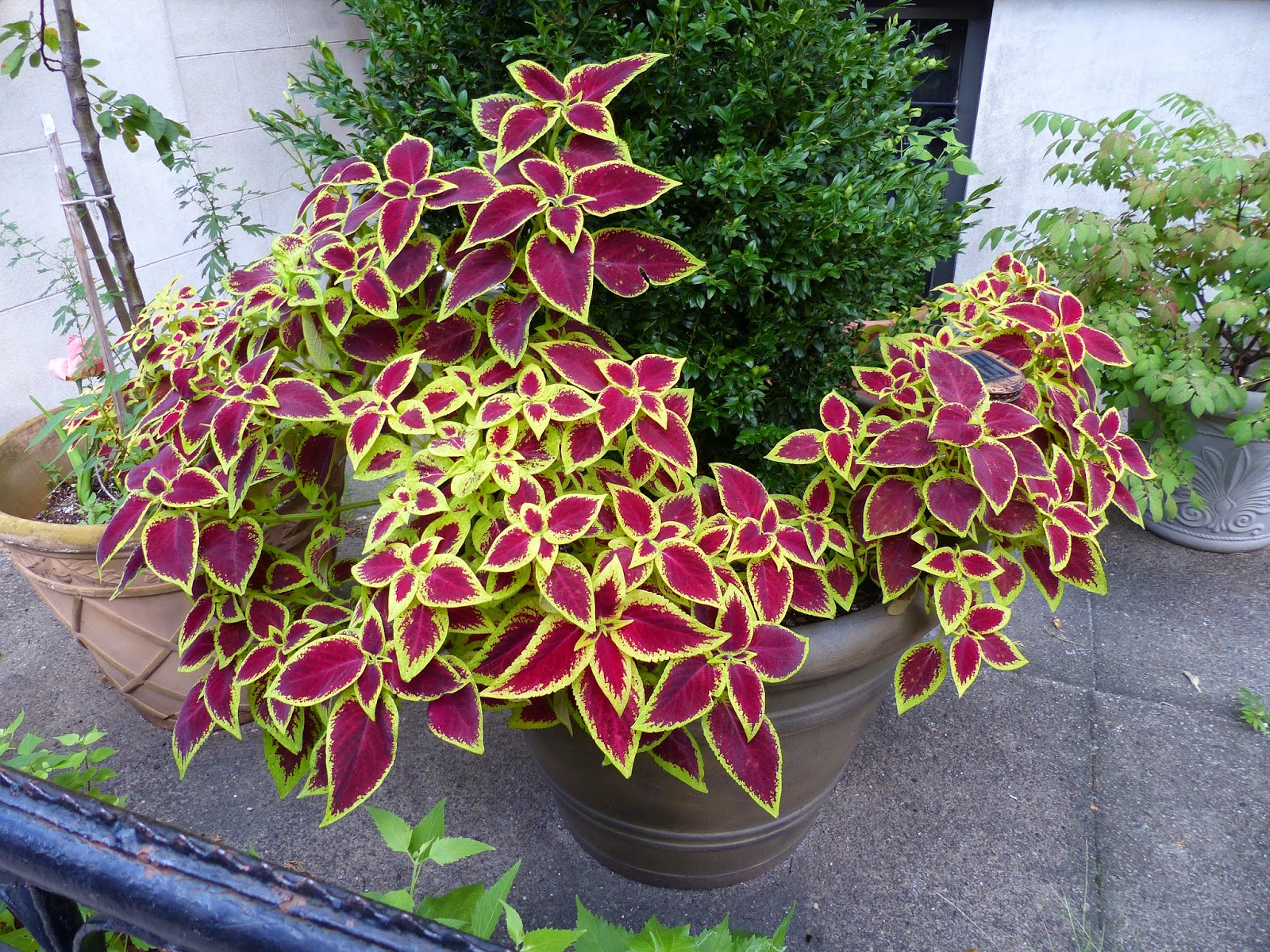 While I was in Brooklyn, New York, with my new granddaughter, I read several baby books, including Bringing Up Bebe by Pamela Druckerman, about how French women deal with their newborns and toddlers.  The author is American, but has raised her children in Paris.  In one section, she talked about the contrast with some modern American parents.  She cited Park Slope, an upscale area in Brooklyn, as Ground Zero for helicopter types who hover over every word and action of their children.

Her description of these new-fangled American rituals (I took this as likely peculiar to New York City and environs, but then I don't really know) was funny.  Apparently, it's in vogue to tell your child exactly what she or he is doing at every moment.  On a visit to New York, the author had been at a play area in a New York park (Prospect Park or Central Park - I can't remember) and watched as an intense sort of father served as commentator for his child, announcing the toddler's every move on the slide and other play areas.  "You are now coming down the slide."  "You're climbing up the ladder" and so on.

I thought she was exaggerating until I stood taking this photograph in front of a brownstone on Clinton Street, between Carroll Gardens and Cobble Hill.

"This is a coleus," a woman's voice behind me said.  I didn't look around at first to see whom she was addressing.  "It's a summer annual, and it is grown for its brightly-colored leaves."  I turned my head and almost gasped.  She was talking to a boy who looked to be barely three.  He had a tiny scooter with two wheels on the front and a pint-sized helmet.

"It's planted around a boxwood," she continued.  By her diction and lecture stance, she could have been leading a novice class of horticulturists.

"What colors do you see?"  At least this sounded more reasonable.  The little boy was silent.  "Tell me what the color is in the middle."

"Red," the little boy said in a guessing-like tone.  "Almost," she answered.  "We call that color deep cerise.  What do you think that other color is?"

I waited for a terrible moment, feeling sorry for the little boy.  He said "green," in a shy, questioning tone, but very sweetly, she said, "Close enough.  It's chartreuse.  It's a cross between yellow and green. See?"

I have to pause here to say that when my older daughter was only two,  I drilled her on which flower was a zinnia and which was a cosmos.  When she had mastered the concept, I thought she was brilliant.  I was probably no different in my quest to educate my daughter so she'd be sure to get into a good college.

At any rate, I guess I wouldn't have paid much attention to the exchange if I hadn't just read that book.  The woman asked if the little boy thought it was pretty, and to my amazement, he said, "It's the prettiest one I've ever seen," and then they were off, as the light on the cross street lit up that it was okay to walk.

As I said in an earlier post, to make my walks more interesting, I ran a sort of contest, picking out the best garden scenes or window boxes or planters.  I've never thought much about coleus (it can be garishly misused, in my opinion), but my friend Benjie gave me a lovely bi-colored green one that I kept in water over a couple of winters and put in a container again in spring.

I think the little boy was right.  This was the prettiest coleus in Brooklyn, or at least on Clinton Street.  I walked by there several times during my stay, and saw others stop to admire the plants (there was a matching one on the other side of the steps).  There's nothing quite like the combination of chartreuse and deep cerise.  I hope that little boy gets into Harvard, and I hope that if I go back there next year, the owner of these planters will have saved this eye-catching plant.