Sometimes you need to simplify a design 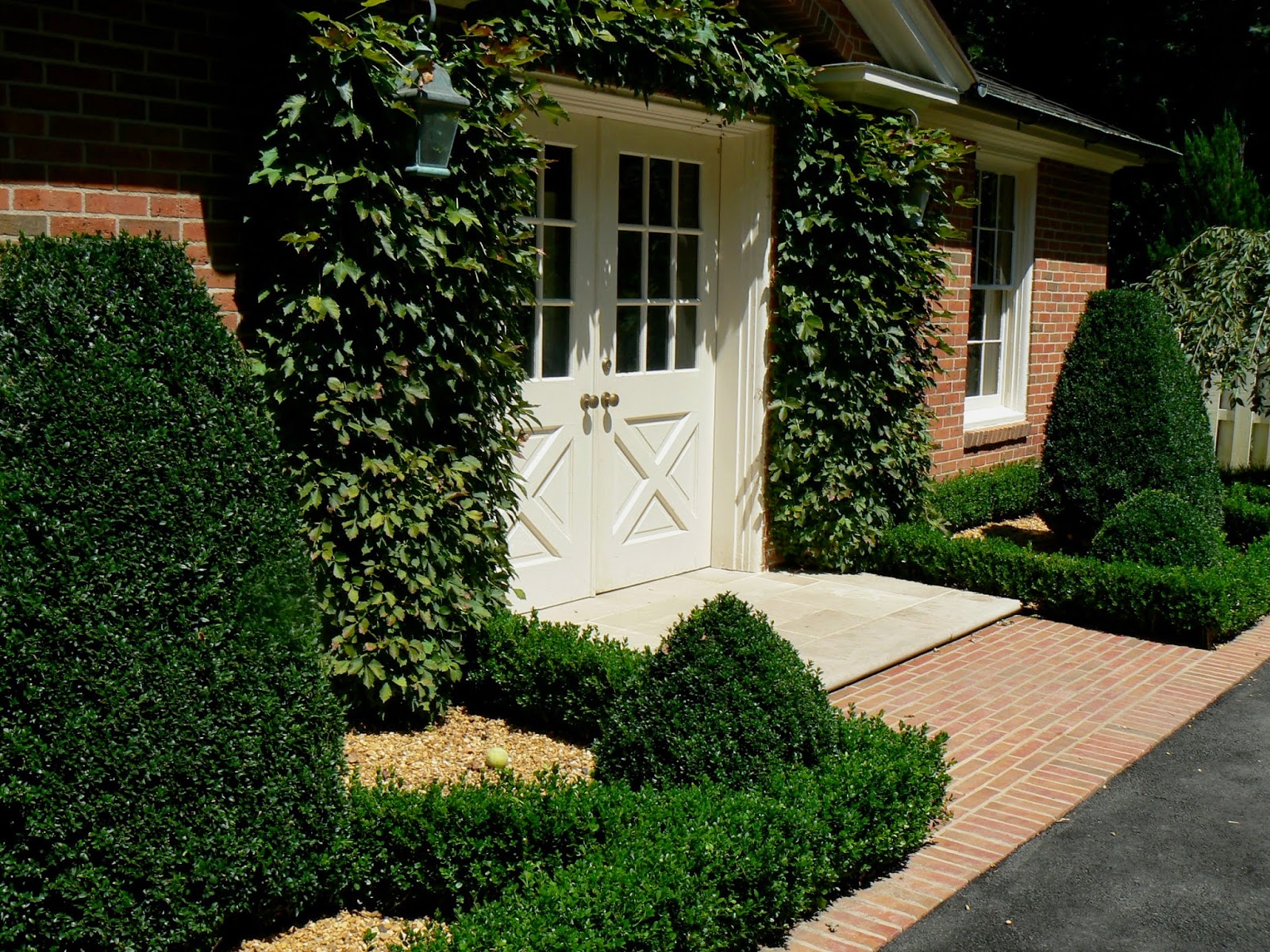 Sometimes I wish I had formatted this blog to show a "before and after," because the change here is so dramatic.  A friend of mine designed this garden with input from the owner.  Another friend I know takes care of the garden.

When it was originally conceived, the designer had specified boxwood parterres for the upper levels (to the left of this scene).  The owner wanted flowers and vegetables to go in the middle.  The result was charming, but it was high maintenance with the changeout of the seasons, deadheading and a lot of pruning of flowering shrubs, clipped bay tree standards and the replanting of annuals.  It was beautiful, especially in the late summer, with zinnias and showy annual black-eyed susans.

The area you see above was drastically different from its new incarnation.  This is a pool house.  I never realized that fact until the re-do of the entrance.  Part of the reason I wouldn't have guessed the building's purpose is because I was distracted by a waist-high, white picket fence where the brick meets the asphalt.  You had to open a gate to get to the double doors of the pool house.  Inside the fence, where the boxwood parterre and gravel are now, was an herb and vegetable garden.  Flanking the entrance just inside the gate, two large terra cotta pots held boxwood topiaries in the shape of roosting hens.  Against the brick walls, large plantings of sweet basil and a few trailing herbs grew in raised wooden boxes.  At the ends of these matching rectangles within the fence were pots with wire cages intertwined with the sparse foliage of yellow cherry tomatoes.  In front, two rustic baskets hung from the pickets.  It was definitely a country, informal look, and there was a lot going on in a little space.

The other day when I dropped in, I was surprised at the change.  The middle of the big parterres were covered in dark mulch, without a single flower inside the boxwood confines.  In the middle sat a large raised container with a giant agave, a very structural element that lent a gray color to contrast with the green.

I'm not sure what prompted this change.  I'll have to ask the designer.  Vegetables and herbs are now hidden behind hedges along the driveway near where a path leads down to to the goat and chicken yards.

Maybe it's because I long for order in my own life or the fact that I like to look at soothing scenes, but I think this is a great improvement over the rustic look.  As much as I like the idea of "country in the city," this scene matches the rest of the garden as it is now and certainly simplifies entering the pool.  Gravel, clipped boxwoods, vines trained over the doors and new limestone pavers beneath, create an ordered, but handsome scene as you pull your car into the parking area.  I really like it a lot.
Posted by Martha Smith Tate at 2:37 PM