When "seeing red" is a good thing 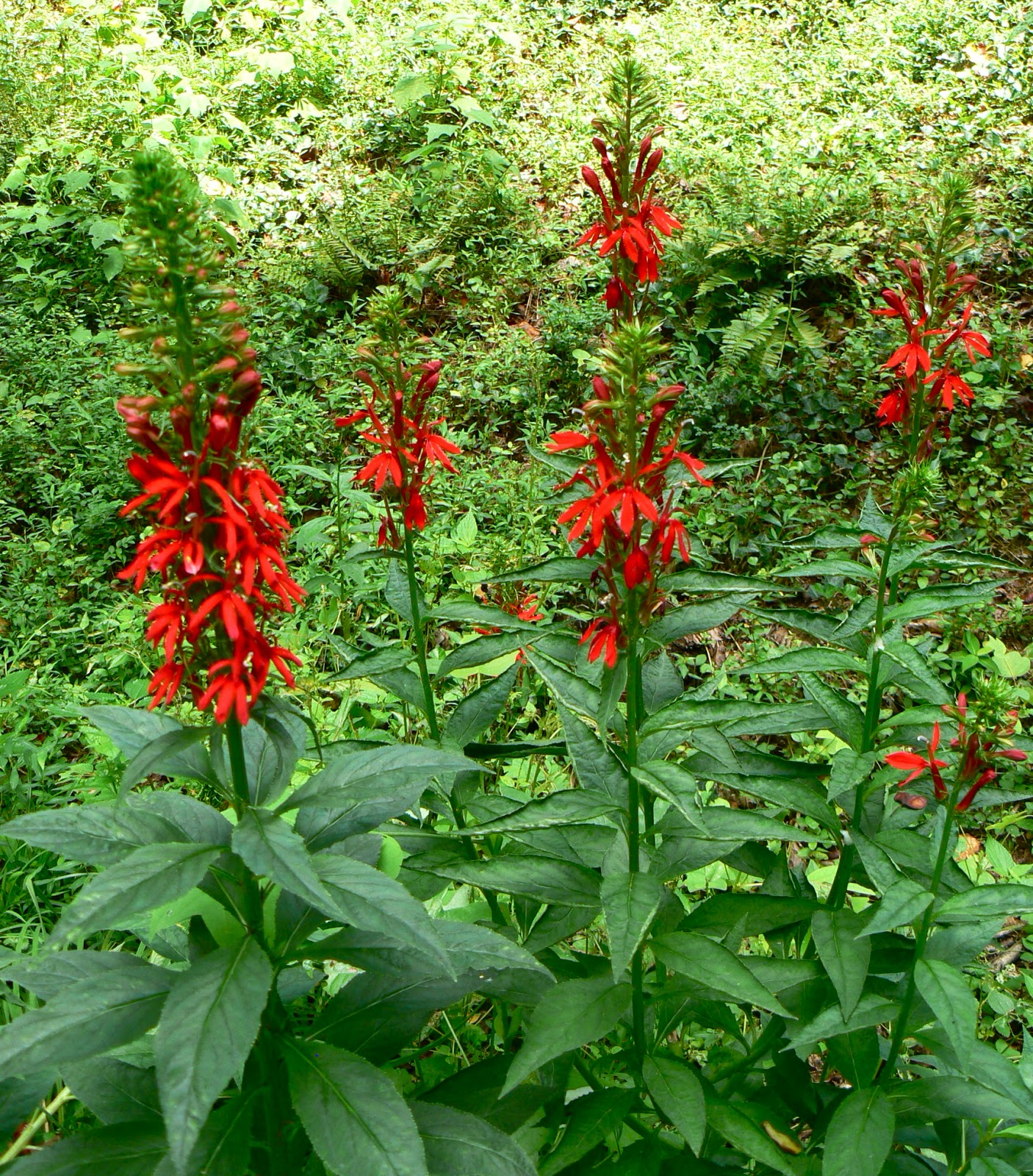 Yesterday, it hit me that it was the middle of August, and I had not checked on something.  When I moved here 41 years ago this month, I came into a whole new world.  I grew up on either five or six acres (how I wish I'd written this down) in the little town of Palmetto, Georgia.  Our house was old - Mother always said it dated from 1852, and that the bricks had been made in the front yard.

I don't know if this date was accurate, but judging from the super-wide floorboards in my room, the 12-foot ceilings, the thick walls and the wavy glass in the huge windows, it could have pre-dated the Civil War.  We had lots of trees - 13 large pecan trees, to be exact, plus a number of oaks, and in back, what we called a cottonwood tree (Paulownia tomentosa).  This latter tree shaded a sandy parking area where I played many a game of hopscotch.

We also had lawns, one we called the big lawn for obvious reasons and the smaller lawn right in front of the house.  There were also huge vegetable gardens, an apple orchard, pear and plum trees, and plenty of sun or shade to be in, depending on your mood.  It was an ideal place to grow up.  However,   we had no woods to speak of.

So, when I married, I moved onto four acres, but it was totally different.  There was a tiny 1927 cottage on the back of the property.  It was surrounded on all sides by deep woods.  There wasn't so much as a foot of full sunlight.  Tall trees loomed overhead.  A square patch of weeds and moss was the only thing you could possible refer to as a "lawn."

By that time, Mother and Daddy had moved out to a farm they had bought in 1957.  They had built a house my senior year in high school, and we left what will always be in my heart and mind my "homeplace."  The new house was sitting on top of a hill in the blazing sun.  There had been elm trees around, but they died, one by one, victims of Dutch elm disease.

Meanwhile, up here in Atlanta, I tried to grow things that needed full sun.  I had no success.  Someone had once had some "gardens", with a couple of brick paths and a little concrete pond.  There were also a few boxwoods around the cottage and some azaleas.  Mostly, though, it had been neglected, and with so much shade, there wasn't much I felt like I could do.

But, as time went by, I began to appreciate a few bright spots.  Someone had planted a lot of jonquils on a hill behind the cottage.  And, around that little pond were some red spider lilies.  In spring, tons of snowdrops would pop up.

Our driveway wasn't paved (and still isn't).  It was 1/5 mile from the street.  That first August, I was walking along, and something red caught my eye.  I looked over where, at that time, there was a creek and saw these bright red flowers - a large stand of them - all along the water's edge.

It wasn't until later that I knew that they were wild cardinal flowers (Lobelia cardinalis).  I can only assume they were native to the spot.  Or, it's quite possible that someone who had lived on the property  had planted them.

Every year, they surprised me.  It would come the middle of August, and I would look over into the creek bottom, and there they were.

But one year - I think it was about eight years ago - we had a terrible drought.  Already that creek had dried up due to someone building a 20,000 square foot house on the ridge up the hill from me.  Even though the water had quit flowing (there's an old stone cistern on my property, and there's still some water in it), the area where the cardinal flowers are is still mushy, especially when it has rained a lot.

That one year of the drought, I couldn't see any flowers.  I went down into the dry creek bed and found only a single plant with one spindly bloom.

But then, to my surprise, the next year one plant came back.  Every year since, I've looked down, crossing my fingers that there would be red flowers.  I have not been disappointed.

So, yesterday, I walked out onto the back terrace, holding my breath.  I was so relieved when I saw the bright red glowing in the filtered sun.  I think there is an additional plant this year.  I will definitely put on my long boots and go down there and investigate.

It is amazing to think that a perennial could come back for 41 years.  I can't say if these are plants that have re-seeded or if the root structure has been there all along.  Either way, they've endured, even with the introduction of deer over a decade ago (seems to me I read that the plant is poisonous).  I am especially happy to have these flowers, as the deer have eaten all of the native arborescens hydrangeas and every single hearts-a-bustin'.

It's a happy feeling to look out on an August morning and see red.  I hope the cardinal flowers will come back for many more years, maybe brightening someone else's day in the far-off future.
Posted by Martha Smith Tate at 3:04 PM