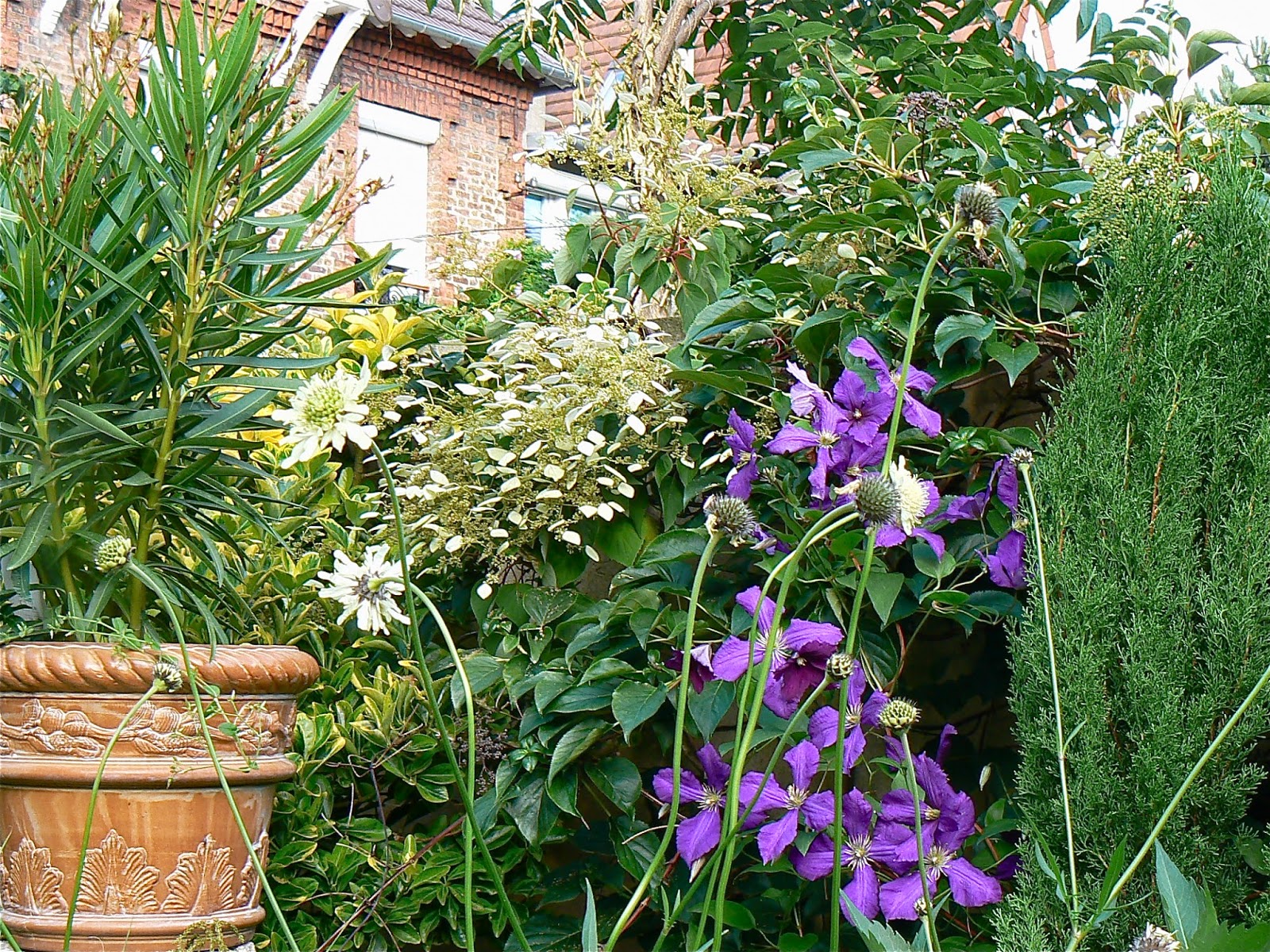 When I was in Paris in late June 2012, my daughter Anne and my childhood friend Linda went with me to visit Carol Tessier and see her amazing garden.

I met Carol in the early winter of 1971 at a ski resort near Mont Blanc.  We've kept in touch ever since. Who would have guessed that the two of us would be discussing gardens some four decades later or talking about gardening styles and propagating plants?  At the time we were only interested in adventure.

Carol is from Johannesburg, South Africa, and grew up amid gardens.  One of her sisters has a famous garden on a farm in a different part of the country.  Carol's grandfather had a great influence on her.  He had a large garden where she spent hours playing and following her grandfather around.  He had a wonderful collection of hellebores.  She managed to smuggle some of his seeds out of South Africa (this was years ago) and now has descendants of her grandfather's hellebores in her own garden.

Carol's garden is hidden behind her home on a narrow street in Asnières on the outskirts of Paris.  This is a simple description, but she has created tightly packed borders of perennials, shrubs and vines, all artfully arranged as to texture and color (Carol is an artist who worked at the Louvre for years).  The evening we were there. we had cocktails on the lawn with Carol's husband Luc and then dinner in the conservatory.  Sitting outside, we were surrounded by glorious flowers in bloom.  I went around with my camera, trying to capture at least a few of her plant combinations.

Above, you can get an idea of just one little snapshot of a marvelous composition of clematis, what appears to be a giant bloom on a climbing hydrangea vine (Schizophragma hydrangeoides, perhaps?) and pincushion flower in the foreground.  She has a lively mix of evergreens and variegated plants all throughout the borders.  Colorful foliage - yellow, blue, maroon - accounts for much of the visual impact.

Carol's garden is so complex and varied that I was curious about how she makes decisions about where to put plants.  I had written Carol an e-mail and asked several questions.  Here's the answer to:  "How did you decide on the style of the garden?"

"I don’t think that we really decided on the style of the garden. It just seemed to gradually evolve. To begin with, we had very little time for gardening as the house was in a very bad state of repair, and we did all the renovating ourselves. We started by planting a bit of lawn bordered by some flowerbeds. We decided on their shape and curve by laying out the hosepipe and having a look at the result from an upstairs window. The bottom of the garden stayed wild for numerous years, much to the children’s delight. They remember their house in the lilac bushes and the swing that Luc made between two trees. But over the years we gradually conquered the rest of the garden and learnt through trial and error, planting the higher plants in front of the small ones and often so close that they literally suffocated!!! With memories of the large South African gardens, I still try and pack too many plants into ours, and still can’t resist buying new ones, even if there isn’t any space for them. Luc says that he would prefer not to be a plant in our garden!!"