A time to sit, or maybe not 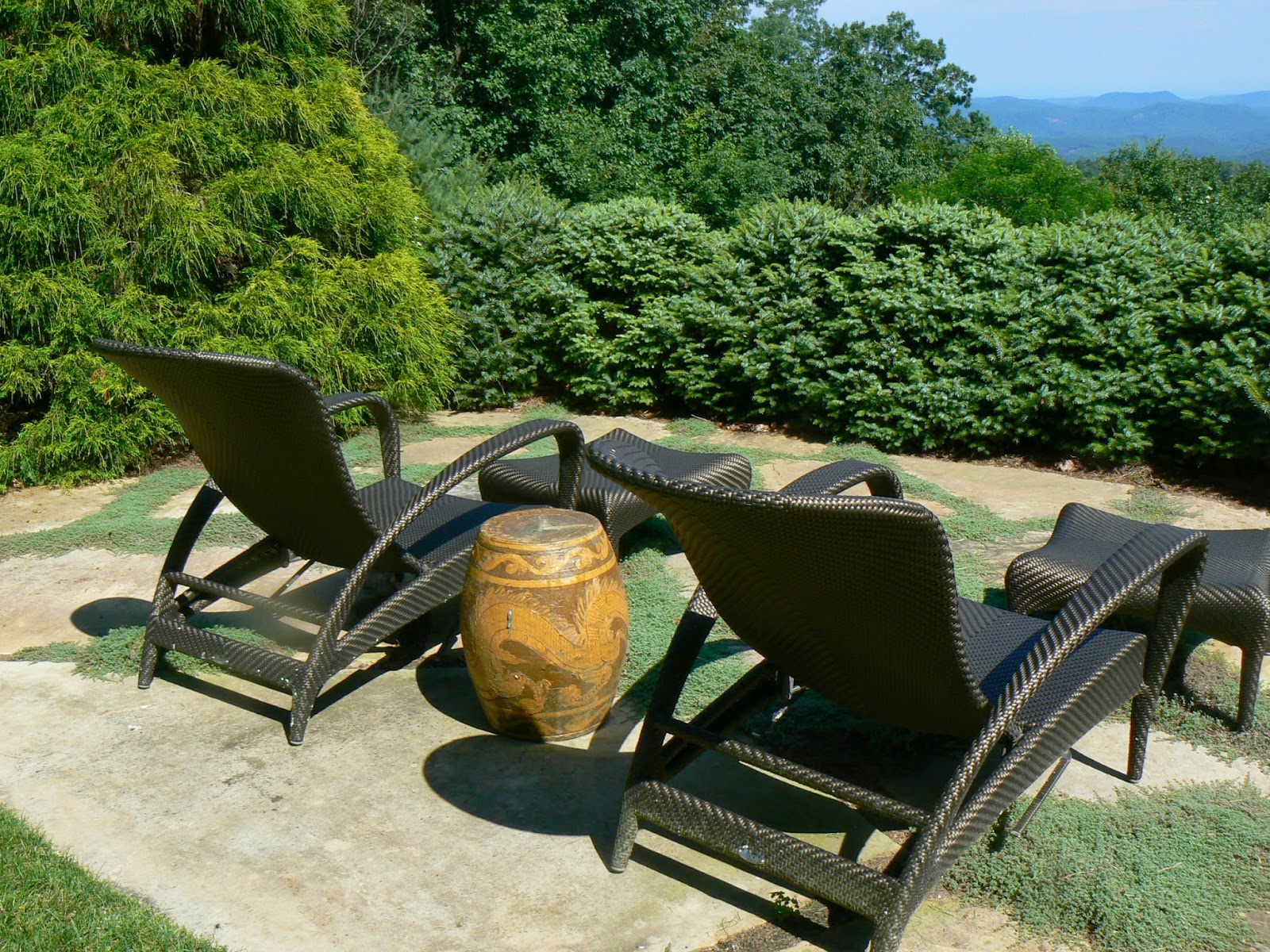 Last fall, my friend Benjie gave me a very handsome garden bench.  It's one of those concrete ones made to look like wood.  Well, on this one it's just the legs that do, but it looks great as the focal point in my new arch garden.  When it was put there in late September, I envisioned cool, leisurely mornings  having my coffee and reading the paper, enjoying being outside.  The reality?  I haven't sat on the bench even once.

This also goes for the bench in the new lower garden, the latter pretty much a clean slate right now - just a rectangle of tiny pea gravel bordered by cobblestones, boxwoods and a hemlock hedge.  I hope to figure out what to do with the space soon.  Sometimes it takes years for me to get an inspiration. I hope this won't be the case, as I'm sort of getting on up there.  Perhaps, if I'd spend some time on that bench, though, an idea would come to me.

On July 4th, I went to Highlands, N.C., stopping by to see Claude and Ann Sullivan's house renovation and their expanded garden.  Both were stunning.  I had seen the original interior and the beginnings of the garden when Claude built atop a mountain his family had owned since the 1920's.  He was a great friend of my late husband's; they were classmates at Virginia Law School and later law partners.

While I was charmed by what they had done to the house, I couldn't believe the garden.  I described in a previous blog post a semi-circular lawn surrounded by wide borders.  There are beautiful rocks and ferns and astilbes and hostas in the shady sections.  In the sunny areas are flowers and shrubs set to bloom throughout the season.

One of my favorite spaces was the above sitting area, surrounded by conifers and looking out over the mountains.  I'm not sure if those chairs are facing west or east, but you'd either see a beautiful sunset or a gorgeous full moon rising.  Growing in the cracks of the stone is woolly thyme, which is not only attractive but very aromatic.  We oohed and aahed over this composition, imagining that Claude and Ann must spend every evening out there, having a glass of wine and watching the waning day.

Not so.  Claude says that since this has been in place, he and Ann have sat out there maybe three times.   Even though Claude is now retired and living full time in Highlands, he's finding that leisure hours are hard to come by.

I think this happens a lot.  I know this can't be right, but as hard as my mother and daddy worked, it seemed like they took more time to enjoy things.  They never sat on a bench, although my mother did spend time with her grandchildren on a swing out in the yard.  And, in Daddy's last year, he enjoyed sitting on a garden bench in the carport, listening to the bob-whites and whippoorwills.

I don't know, but I find that by the time I do paperwork and run errands, it seems like the day is gone.  Tuesday, I spent the morning at the Fulton County Tax Assessors' office and recording a survey of the farm with the Clerk of the Superior Court; yesterday, I drove a friend to Newnan for some business.  And, then there is exercise, walking the dog, and it's time for supper.

All the devotional books I have tell you to be still, to take time to rest and contemplate. But, I feel guilty if I do that.  Even working a crossword puzzle, I feel I shouldn't sit until I finish the whole thing, so I do it piecemeal, especially on Wednesdays (by Thursday, I'd be on the sofa the entire day; I'm just getting where I can get about a third of that one done).

But, once the mosquitoes die out this fall, I hope I'll go out in the mornings and sit and read the paper instead of watching the local and national news, which always gets my day off to a rocky start.  Sad to say, I'm the type who thinks I need to be doing something constructive all the time.  Thus, I'm always disappointed when I don't accomplish much, and the idea of sitting on a bench seems like a waste of time.  I know it isn't, that one should stop and smell the roses (maybe the 'Graham Stuart Thomas' next to the bench will bloom in October).  After all, that's the reason we have garden benches, is it not?

Posted by Martha Smith Tate at 6:14 AM