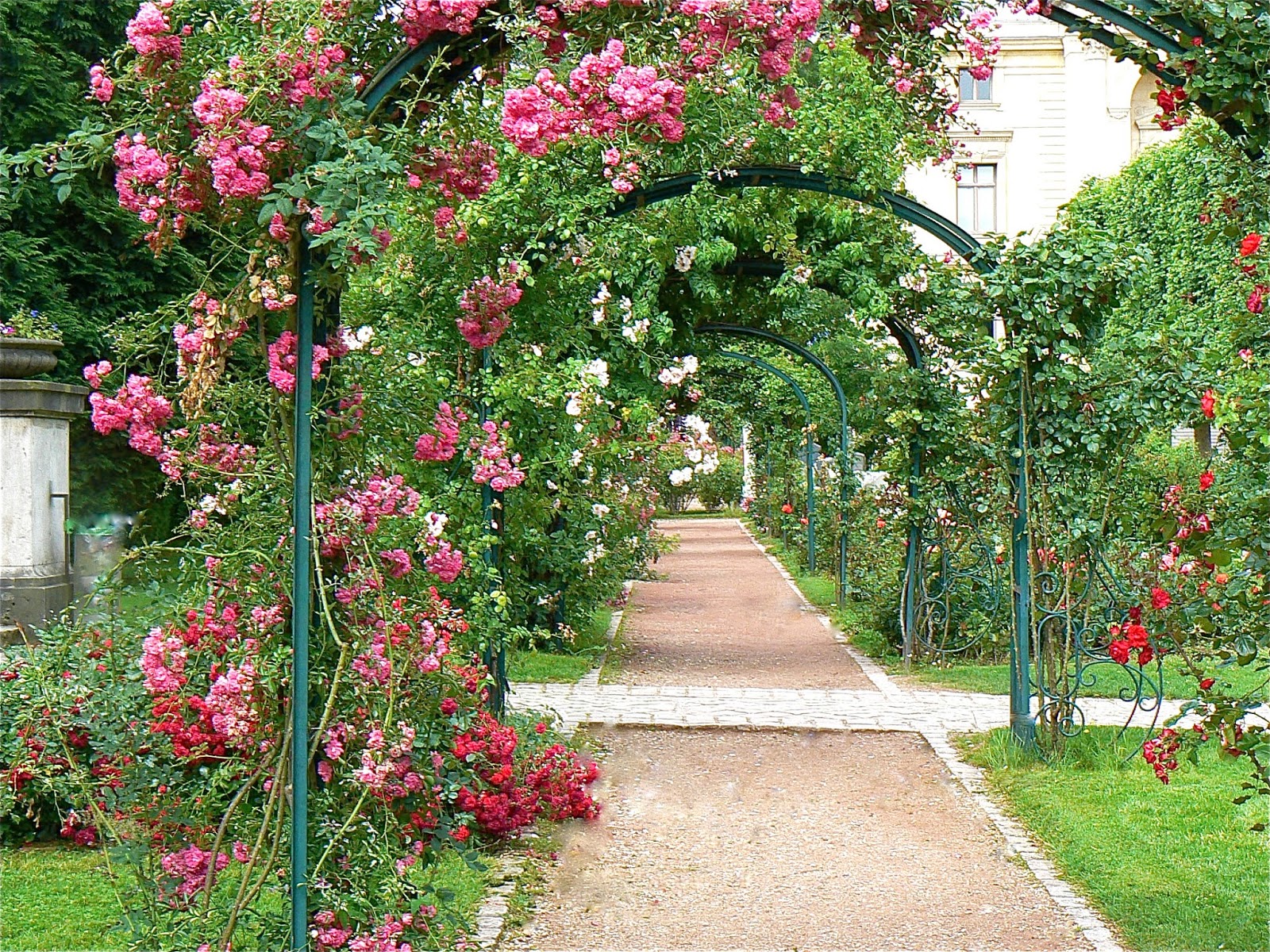 Two years ago today, I stood in the Jardin des Plantes in Paris and took this picture.  I was a little dismayed because we (my childhood friend Linda Jackson Carter and I) were there just after the roses had peaked.

We stayed on the Ile St. Louis where we had rented this unbelievable penthouse (meaning an apartment on the top floor rather than a true fancy penthouse like you think of; it was the location that was unbelievable) that looked out on Notre Dame from one window, a more distant Eiffel Tower from another, the Pantheon, Hotel de Ville from others.

There was a lot of noise down below, especially in the tiny park at the end of the Ile.  But, I loved being able to throw the windows open and hear the man on the bridge to the Ile de la Cite singing La Vie en Rose, accompanied by his accordion.  I'm still kicking myself that I didn't buy his overpriced CD of French songs.  He had a really good voice.

Although we didn't have the most convenient of Metro stops, it was an easy walk from the Ile St. Louis to one of my favorite places, the Jardin des Plantes.  To get to the Left Bank, you had to cross the bridge where all the lovers attach their padlocks and then throw the keys into the Seine.  I saw on the news the other day, that a wall of the bridge had become so heavy with locks that it had collapsed.  I saw couples of all ages attaching their symbols of love that could theoretically never be separated.

Anyway, you walk along, opposite the Seine, past the world's oldest zoo (which one day I'd like to visit) and then on to the long walkways and geometrically laid-out gardens of the Jardin des Plantes, which dates from the 17th Century.  The gardens are mostly contained in an enormous rectangle with imposing buildings that house museums on two sides (maybe three sides?  I'm trying to picture the space).

On one side are the above rose-covered arches which lead to a potager at the end.  There are other gardens in the spaces between the buildings.  From another year, when I was there in early May, I have photographs of iris and alyssum and clematis in those gardens.  Then, there are plantings all down the middle, surrounding vast lawns.  If you walk up one side and down the other, you've had some good exercise.

As is usually the case, I steal ideas from somewhere else rather than conjure something up on my own.    When I looked back at my photographs, I tried to figure out where I could have an arch garden.  Then it hit me.  The huge white oak that had hung over my house dropped a 40-foot-long limb in 2011.  After that happened (the second enormous limb to fall - luckily not on my slate roof), I called the city arborist to give me a permit to have it taken down.  I bit the financial bullet and had the thick stump ground.

The lump of sawdust sat there for two years before I realized that this was where I could put some arches in a straight line.  Granted, I don't have level ground, but I did have a vista, albeit a short one, from the driveway back toward the end of the side of the house.  It took me a while, but I finally found some iron arches.  I bought three (huge regret:  I should have bought four) and had them put in to create a mini-enfilade.

If you know where I live (in a forest in City of Atlanta), you can guess the story up until now.  The deer promptly ate the buds of the climbing own-root roses I ordered from Roses Unlimited.  Also, the sun I'd counted on for mid-summer, that is, straight overhead, did not materialize.  I ended up planting shade-loving evergreen star jasmine on two of the arches.  The latter got zapped this past winter, so the arches are bare.

But, I just walked out and looked, and I am pleased.  Granted, the one remaining climbing rose doesn't have a leaf on it (there are two going up the wall of the house that are faring a bit better; one actually bloomed prolifically in May).  At the end of my short vista, I have a Japanese holly that came up volunteer (that's how we'd say it in the old days), and I have trimmed it to be very narrow.  Eventually it will form an arch, but I may break down and see if I can get a matching iron one to complete the scene.  Back there, I have a chance for a little more sun.

Now, back to the title of this post.  I found a birthday card that shows Judy Garland in her Wizard of Oz outfit (with her ruby slippers, of course).  She's saying, "There's no place like Paris; there's no place like Paris...").  Linda, who does not read this blog, will receive the card in September on her birthday.  We've already been talking about another trip.  I can't go next year, but perhaps the year after.  I want to be there when the arches in the Jardin des Plantes are laden with roses and I can finally visit the Bagatelle in the Bois de Boulogne when it's in bloom.  Until then, I'll have to be content with my little garden and hope that the one rose left will miraculously rise up and cover one of these arches, a la Le Jardin des Plantes.