Trespassing in a country garden 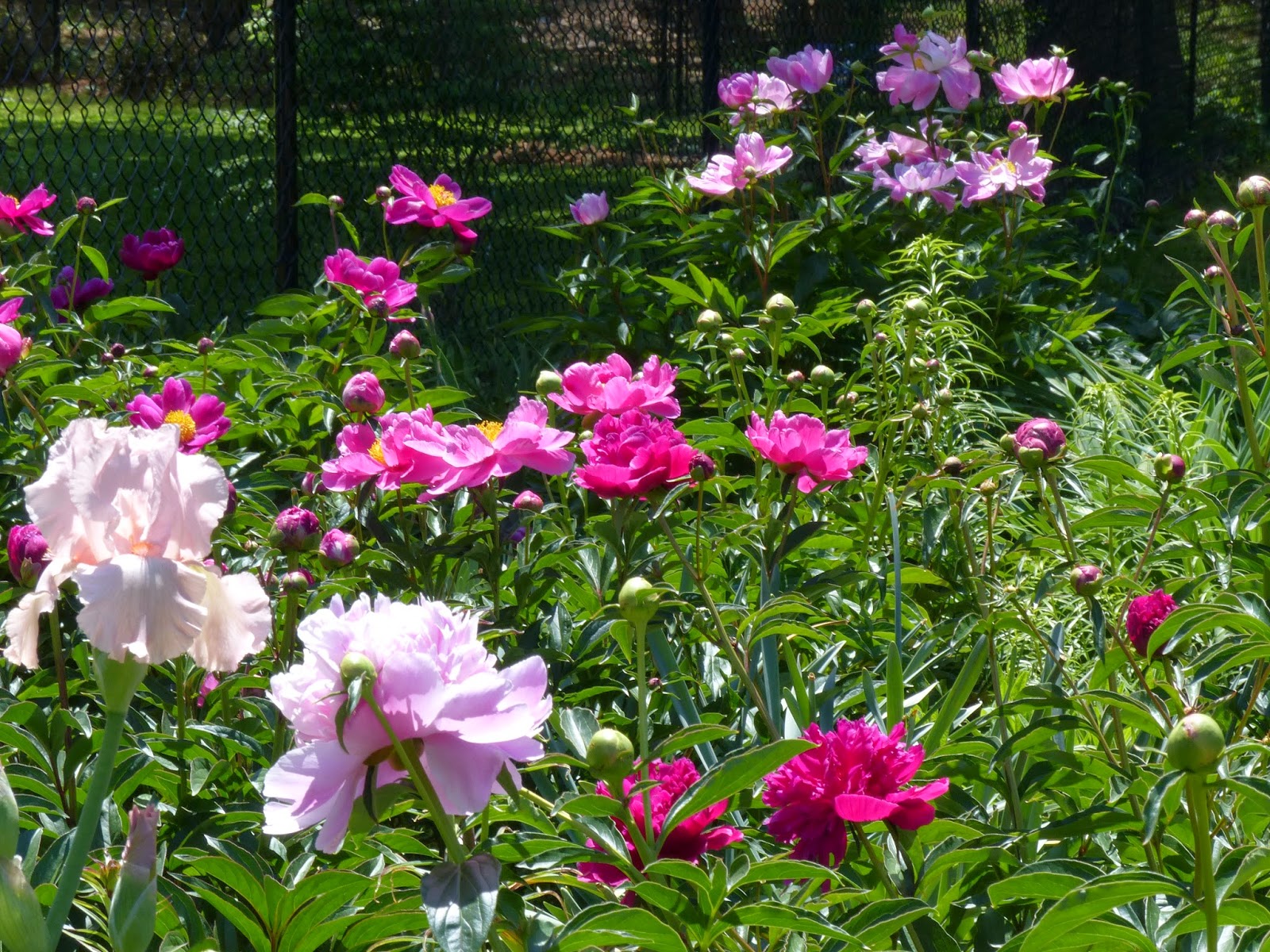 I wasn't going to go another year without seeing Carl and Vosco's peonies.  I was down at the farm on Saturday, and I passed by their house and caught a glimpse of their garden.  I drove on, but then thought better of it. I realized I couldn't come back for another two weeks.  If they weren't home, I'd take my chances.  Peonies don't last all that long here in the South.  And, after all the cool days we had in spring, the weather has lurched into summer.  It will be close to 90 tomorrow.

Anyway, I parked in front and walked around to the back door and knocked.  No one answered.  A neighbor was out in her yard, and after I had helped myself to a bunch of photographs of Carl and Vosco's long, wraparound borders, the neighbor's dog started barking at me.  His owner was out in the yard.  I introduced myself, and she said she knew who I was and it would be okay.  I'm thinking she really didn't know me, but saw that I was only taking pictures, not helping myself to the heaps of flowers.

I took mostly close-ups.    Every flower was more fantastic than the next.  I zeroed in on one peony that was the biggest of all.  I wanted to show the size of it in comparison to another object.  I stuck out my hand but quickly withdrew it.  My hand looked like it belonged to a witch.  No use to ruin the picture just to show that the flower must be eight inches across - very double and light pink.

But, there were reddish single ones that were also spectacular.   Then, those pink ones you see in the upper right hand corner looked like graceful butterflies.  It's too bad that I don't have a fancy wide-angle lens.  I probably have some setting that would have shown more, but this camera is new, and I've only started the instruction booklet.

I have great shots of some spectacular bearded iris (they had gorgeous examples in every color), and one scene of some cobalt blue Siberian iris.  These guys can really grow flowers.  What is amazing is that this is just the early May season.  I can't even start on all the fabulous lilies they have, in addition to a lot of June perennials and a dazzling fall display of chrysanthemums.

Over a hundred photographs later, and with their chickens fussing up a storm,  I was about to leave when I tried the view above, wanting to show how many peonies they had.  That turned out to be impossible.  Another bed perpendicular to this one had many showy flowers, as well.

I rushed off in a hurry without leaving a note.  I won't be down there anytime soon, so I'm glad I worked up my nerve to walk around.  I don't think I'm exactly uninvited.  My great gardening friend Karen Villano took me to their garden a couple of years ago and introduced me.  I didn't go at all last year, but I won't make that mistake again.  I'll have to photograph this exact bed when the day lilies are coming into their own.  It an entirely different show.  You can scarcely believe it's the same place.