How the bachelor's buttons came to be there 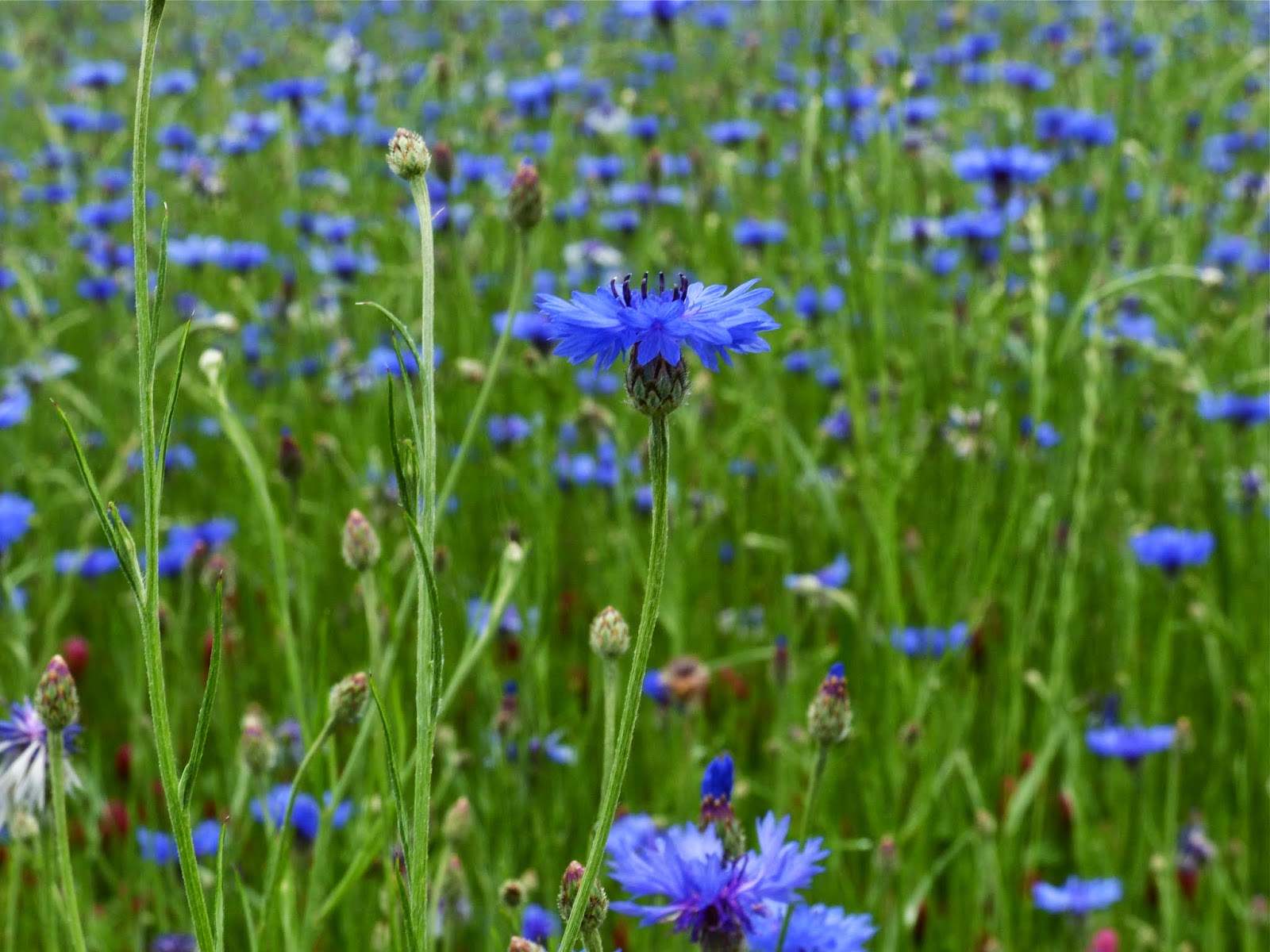 I noticed on Facebook that Susan Belcher had taken a photograph of a huge field of blue wildflowers on the road where she used to live and where the farm is.  I had taken virtually the exact view of the rolling meadow of blue.

When I stopped the second time, a lot of red clover had come into bloom, and the close-ups were mixed with red.  Still, the blue mist that covered the huge field on the grounds of the Georgia Baptist Children's home (which abuts the farm) was spectacular.

The day I took this picture, some bicyclers had stopped and had their cameras out.  One of them said he'd just been to Texas and had ridden through bluebonnet country.  He said this field reminded him of what he'd seen out there.

For years, maybe 40 years even, I have been picking bouquets of these flowers, or rather their ancestors.  The reason I know this is because the seeds originally came from my mother's friend's house.  She had planted her entire multi-acre yard with bachelor's buttons (Centaurea cyanus).  After the flowers had bloomed - usually from late April through early May - her ex-husband would come and mow her vast front yard.

Then, I would see him on his tractor at the Children's Home.  Little by little that one field became a solid mass of blue cornflowers (my late mother-in-law, who went with me once to pick flowers at the woman's house, called them ragged robins).  I have a large bronze-colored camel bucket, and I would fill the container with the blue flowers.  There were a few pink and white ones mixed in, but blue was the dominant strain.

So, every time I pass by that field when it's in bloom I think of both the woman who was gracious to let us come and pick, and her husband, who was always so friendly and who is responsible for creating this cheerful field of beauty.  I noticed some vestiges of flowers left in front of the woman's house.  Someone else moved there after she died, and then it looks like someone else tends a vegetable garden next to the once-flowery lawn.

Anyway, these are wildflowers, but they are not native to the U.S., although they have naturalized along the roadsides in Georgia and probably in other states.  These are cool season annuals, which means that if you were to start them from scratch (you'd need to do so on well-drained,  bare ground), you'd plant them in the fall.  They also look wonderful with the bright red Flanders Field poppies (Papaver rhoeas) and Shirley poppies.

Just for the record, I no longer pick these flowers, because I don't have permission.  The packets of seeds are sold - sometimes in racks - but always at the wrong time.  Spring planting doesn't work.  I have ordered from Wildseed Farms in Texas  www.wildseedfarms.com/.  That's a good way to establish your own field of dreams. That reminds me, I need to get someone to plow up a patch for me this fall, so that next spring I can pick bachelor's buttons to my heart's content.