We say the same thing every year, "This is the best ever." 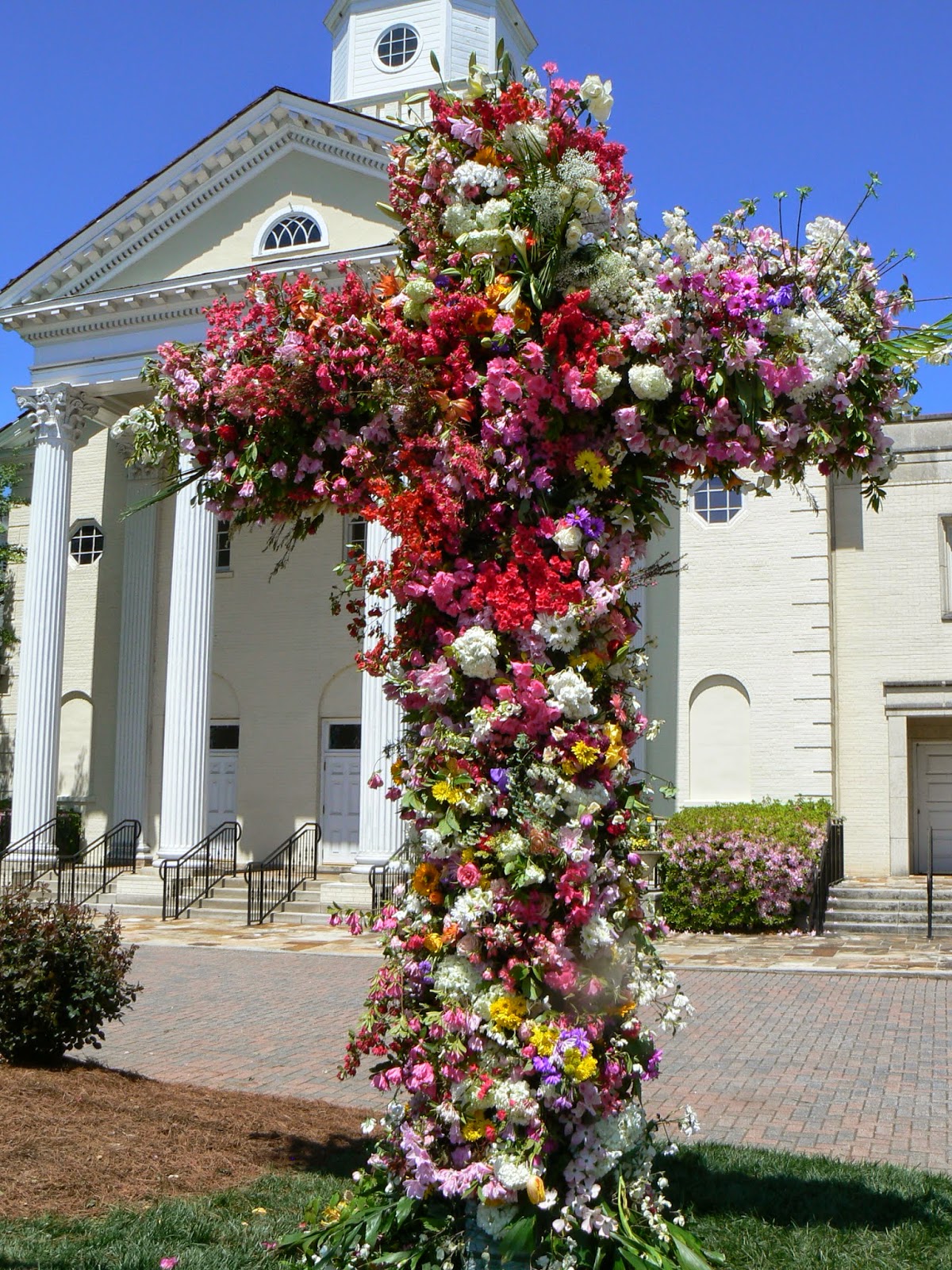 I had to wait for about 45 minutes after church was over (the latest of four services, if you count the sunrise one).  Families gathered around the decorated cross and took pictures for what seemed like forever.  After everyone had gone, I finally got a chance to make a people-less shot.

Our tradition, as I may have already noted, is to bring flowers from home to decorate the cross out front.  On Saturday, I took a picture of the wooden structure wrapped in oasis and plastic.  I can't imagine what passersby must have thought.

But, early this morning, the flowers started coming.  I mentioned already that I had been terrified when I saw this year's date for Easter.  I figured I'd be begging rhododendrons from friends, and 'Knockout' roses - which are fairly thorny and unpleasant to handle - would have to adorn the cross.

But, we lucked out.  Most of the azaleas and dogwoods that lend huge splashes of color to Atlanta bloomed late this year.  In fact, this may be the latest season I can ever remember, not counting the Easter when everything froze, and there was nothing.

Yesterday afternoon, I gathered what I thought was enough bridal veil spirea, doublefile viburnum, giant Chinese snowballs and hot pink azaleas to cover the cross.  I realized when I saw Hugh Schutte out there clipping 'GeorgeTabor' azaleas from the front of the church that some of the old guard, who used to bring armloads of flower branches, have passed away.  There weren't as many flowers as usual, but it all worked out.  Those azaleas needed to be pruned correctly anyway.

Still, we had some great flowers - lots of viburnums, some hellebores, all colors of azaleas, pink and white dogwood, pansies, scilla, some tulips, a daffodil or two, a couple of iris.  It turned out very pretty (the other side, not shown here, was much prettier - it's the side people see when they walk out of church.  Unfortunately, the backdrop is a bunch of overhead wires and a couple of night clubs, one of which is named "Hole in the Wall").

Anyway, decorating the cross is a lot of fun, even though there's a lot of confusion with two ladders going, and little ones coming up with a limp daffodil that is difficult to get into the oasis.

As I was leaving, a family came up.  They had seen the cross, doubled back in their car and gotten out to have a closer look. They had been to church, but not ours.  It was a thrill to get to take their picture.  Other cars slowed down to look.  Whether it was the prettiest one we've ever had I don't know (we say that every year), I was so proud to have had a little part in this great Easter tradition.
Posted by Martha Smith Tate at 2:36 PM