The beautiful call of the wild 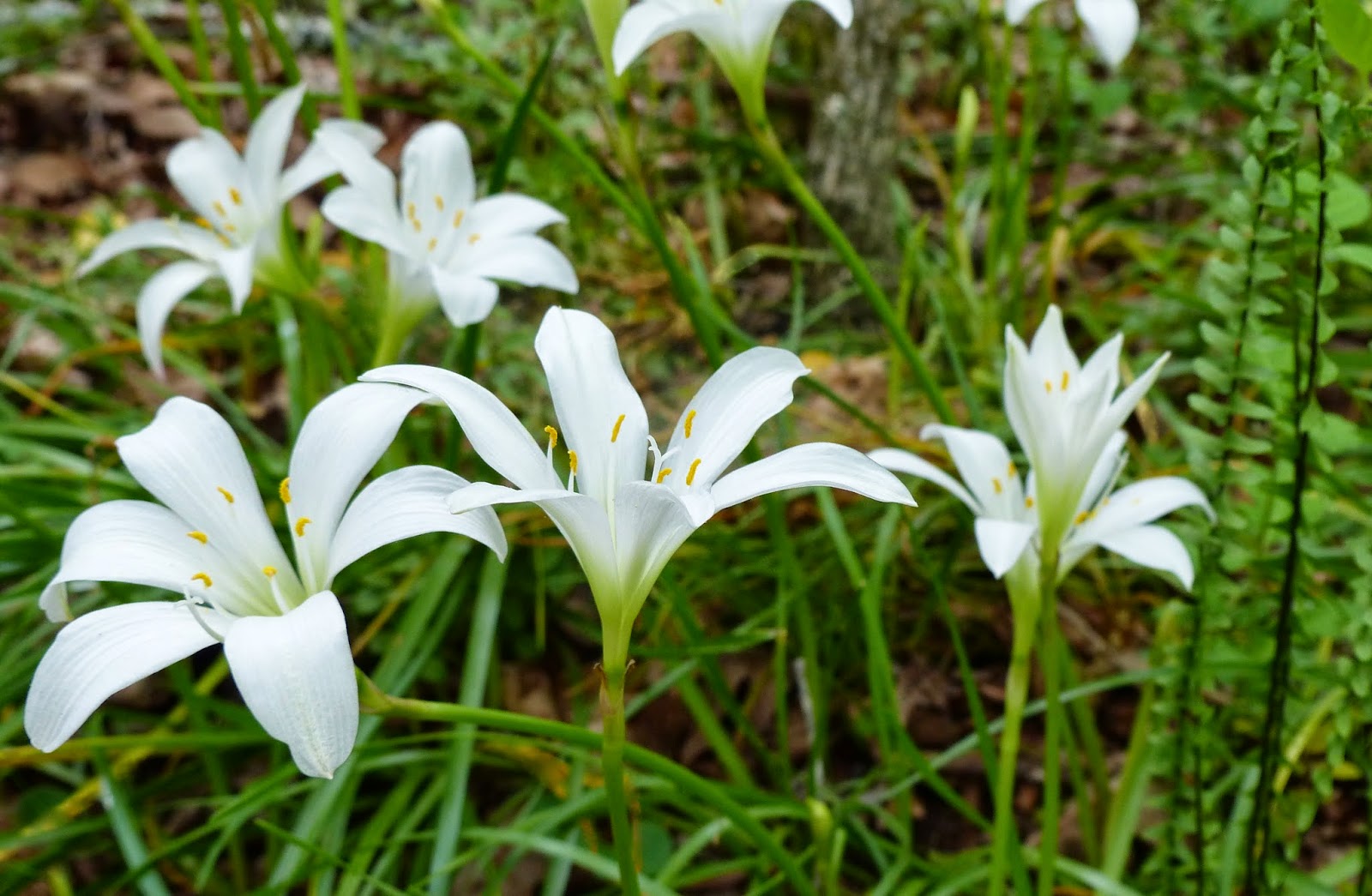 It was an early summer day, maybe three years ago, that Richard Grace and I happened to stop at a wide granite outcropping deep in the woods on the farm.  We often spend at least an hour on a nearby hill, looking for pottery shards and arrowheads.  Then, we'll go on a rough trail down to some wide shoals where we stop and let the dogs splash around.

That day,  I can't remember if we saw the rock from a distance and stopped or exactly how it went.  But, for whatever reason, we got out of his vintage jeep (he is a world-famous expert on WWII jeeps) and walked to the wide expanse of rock.  There, growing around the edges was some grass-like foliage.  I was intrigued; I knew it had to be from a bulb.  There wasn't a hint of what it could be, although along the edge of the outcropping, the soil was damp.

It took a few minutes for it to dawn on me what I must be seeing.  I had a hunch that this could be a stand of Atamasco lilies (Zephyranthes atamasca).  But could I be so lucky?  It turned out I was.  The next year, we hit it just right when they bloomed in April.  I was beside myself.  I had seen a small stand of the fragrant flowers on the property of the late Dr. Ferrol Sams in Fayetteville.  Also, a neighbor of mine here in Atlanta had a single plant she'd rescued along the Chattahoochee River where there was about to be a development.  And, I know that Buddy and Ginny Garrard have them on their property, also along the Chattahoochee, 50 miles south of here.

According to many accounts, the Atamasco rain lily, native to the Southeastern U.S., is quickly diminishing in numbers.  Some wet meadows where they once thrived in North Carolina have all but disappeared.  A few of these places are now covered by shopping centers.  In Florida, where they are also native, the plants in the wild are on the wane.

This year on the Sunday before Easter, Richard and I went to inspect the lilies.  He warned me not to be disappointed.  He'd been there to see that there weren't many flowers this year.

I'm glad to say that this wasn't the case.  It was just hard to tell from the appearance of the buds, which at that time were only tiny balls atop stems.

Last Sunday, we caught them right as they had just peaked.  There were dozens, maybe even more than last year.

On our trek around the farm, we had paused to see that the pink native azalea (Rhododendron canescens) had finally bloomed.  And, to my great delight, Richard had discovered a native bright red woodbine honeysuckle (Lonicera sempervirens) growing in another spot on the farm.  I was anxious, too, to see that a new jeep trail he was forced to cut near a creek bank that eroded badly, had not disturbed the patches of bloodroot that grow there.  Next week, we'll check on the crossvine (Bignonia capreolata) that grows next to another creek.

But back to the Atamasco lilies - what a treasure.  I could be tempted to bring some up here, but I don't dare disturb such a large colony.

There is a downside to all this.  I had on my tall Hunter boots last Sunday, a long sleeved shirt I tucked into my jeans, plus another shirt on top of that.  I had sprayed Deep Woods Off around my knees and waist to ward off any chigger-like creatures, which I am highly susceptible to.  What I hadn't counted on were the little seed ticks.  I was driving home, when I felt something crawling on my arm.  I pulled over immediately and dispensed with a small tick.  But the rest of the drive was agonizing.  I knew they had gotten to me.  I won't go into the particulars, but lying down on that rock to get a good shot of the foot-tall flowers was probably a bad idea.  I managed to arrive home safely and rid myself of all the tiny crawlers.  Only one had taken a bite, but somehow I have some other bumps that itch like crazy.  All in the name of finding beauty in the wild.  Well worth it, I think.
Posted by Martha Smith Tate at 2:12 PM