Memories of daffodils and days gone by 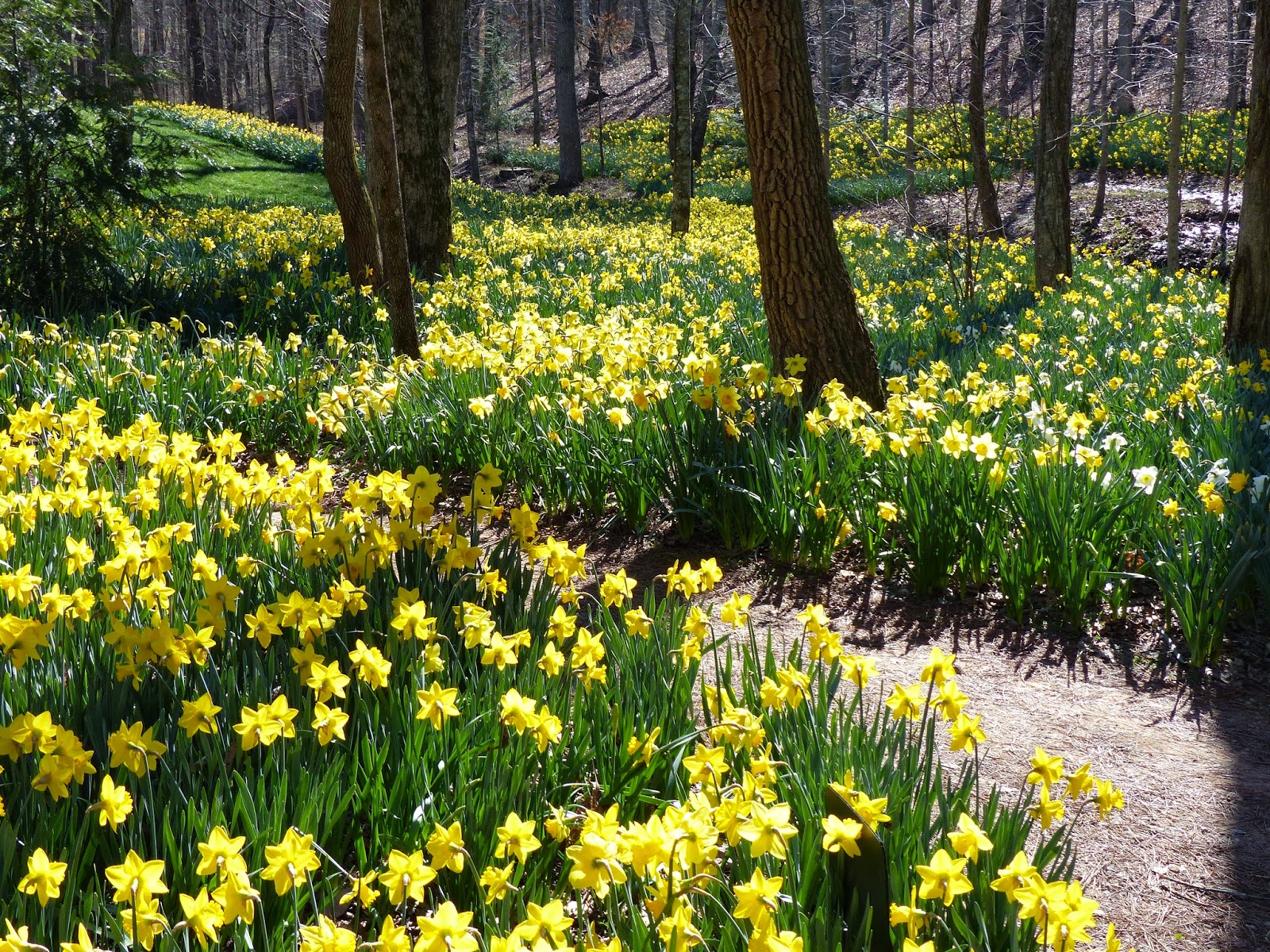 I finally made it up to Jim Gibbs' gardens, which he has opened to the public.  The trouble was, how does one choose out of 200 hundred photographs of daffodil fields that stretch uphill and down and seem to go on forever?

It was late afternoon by the time I got to walk the paths, and the crowds had dwindled somewhat.  I was delighted that so many of the flowers were backlit by the sun.  I kept getting down almost to the ground to catch the light coming through the petals.

I broke down, however, and chose this photograph which gives you a sense of how the flowers fill the valleys of the expansive garden.  I also loved looking up at hills covered with daffodils - mostly white and yellow - as far as the eye could see.

But, in that late afternoon light, the scent of the flowers overwhelmed me, taking me back in time to my childhood home.  I've mentioned before that I grew up in a brick house built in 1852.  It had high ceilings and huge windows with wavy glass.  The floorboards in my room were 12 inches wide.

My daddy tore down the wooden back part of the house and replaced the wing with brick - not nearly as pretty as the handmade ones on the front.  But, in the new part, Daddy put in a large picture window that looked out on pecan trees, an apple orchard and a small brick smokehouse that matched the beautiful old bricks made before the Civil War.  All through this area were daffodils.

The people who lived there before my parents moved to the property across the railroad tracks from Main Street had planted so many wonderful trees and shrubs.  They'd also planted a lot of different kinds of daffodils.  Mother added to them, but most had come from a family who lost the house in the Depression.

So, when I was up at Gibbs Garden, I was not so taken by the dazzling beauty of thousands upon thousands of daffodils in bloom as I was by the unmistakable fragrance of the flowers - that scent that takes you back to the early springs of your childhood.  Picking bouquets of daffodils was something I did every year.  I would bring fistfuls of flowers in, and Mother would wrap the dripping stems in paper towels and then enfold the bouquet with tin foil.  The next day, I would present the flowers to my teacher.

I hope I didn't take any to my first grade teacher.  She was so mean.  Every time I think of her, I remember her taking a ruler and slapping the bare feet of a boy who didn't have a lot of advantages, as my mother used to say.  We were sitting in a circle, each reading a passage from Dick and Jane, and he was not able to do his part.  Instead of encouraging him gently, she whacked him with the ruler when he didn't know the words.  He would try and fail, and she would hit him again.

But I digress.  I probably did take Miss Nellie some daffodils, but I shouldn't have.  The teachers I had after that were more deserving, I think.  Well, maybe not my third grade teacher.  She was not the kindest soul, either, and she had a yard full of camellias and probably daffodils, too.

This has been a strange month.  If you're in Michigan and reading this, I'm sure you're wondering how there could be yellow flowers out in the yard.  I've had some forms of narcissus for over a month now, even though the ones that usually bloom by the first of February were late in coming out.  And, with everyone I've picked, I've been taken back to that beloved yard of my childhood, where each flower burst with hope and renewal and the promise of a full spring to come.