The Christmas rose - what happened? 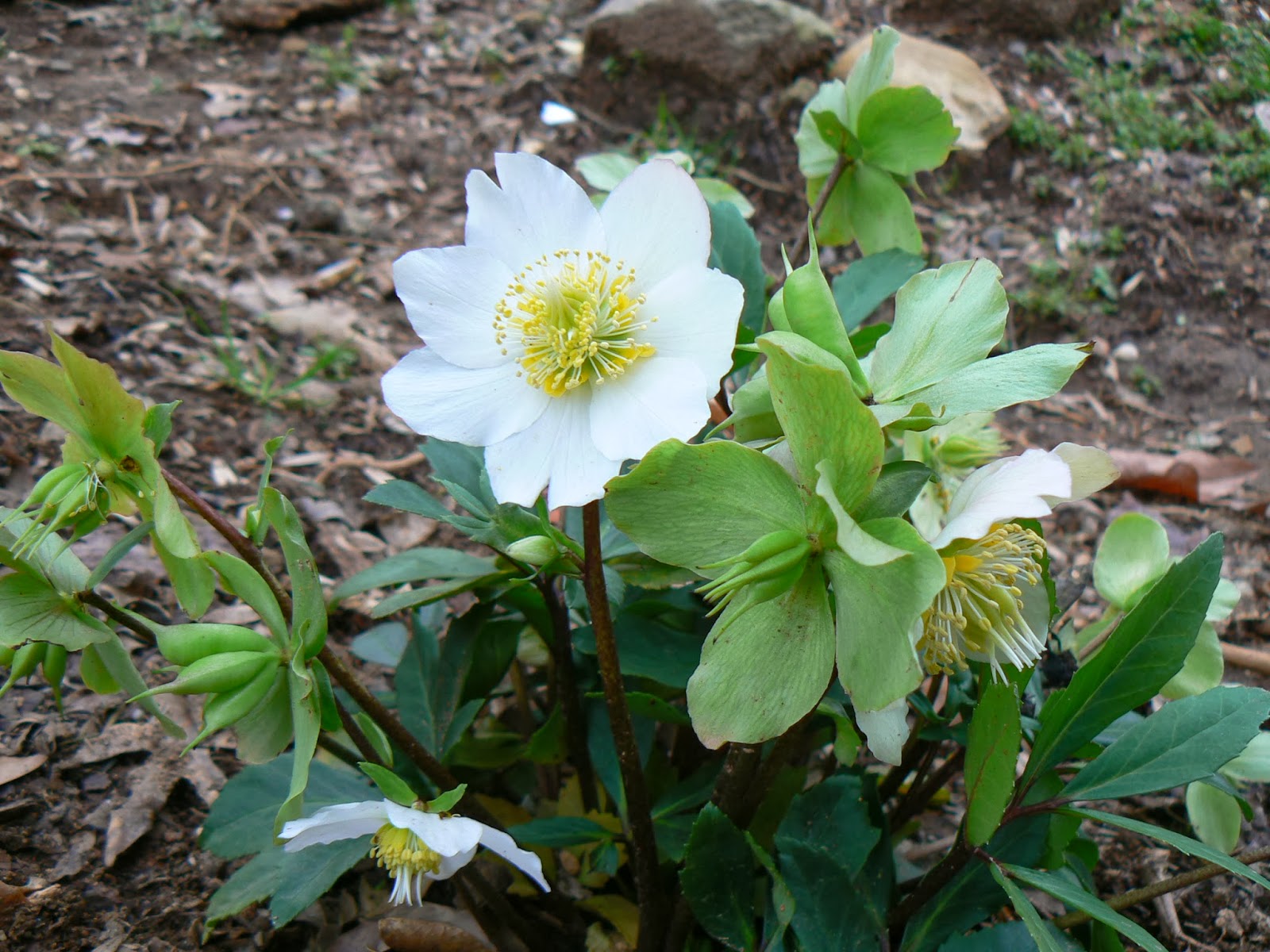 On New Year's Day, I celebrated with some good friends at their home.  I always bring the black-eyed peas, turnip greens and hog jowls (the latter were not very good this year; same brand from Publix, but they didn't crisp up like they should have).

My friend, who loves flowers, had the most beautiful bouquet on the table.  I did a double-take when I saw it.  Were these large azalea blooms?  Then, I recognized the blossoms - Helleborus niger, one of the recent introductions that have large blossoms and face upward.  My friend didn't know exactly which one she had bought - I suspect 'HGC Jacob' or possibly 'Josef Lemper'.  We walked out onto her terrace, and I looked down to see a passel of blooms on just one plant.

Garden designer Marsha Yeager gave me 'HGC Jacob' three years ago.  For two years, the perennial bloomed its heart out, and I had cut flowers inside.  Then, last summer, the plant began to decline and finally perished.  All the leaves and stems turned brown and dried up, although the whole looked as if it had melted.  I was crestfallen, to say the least.

I took a chance on planting 'HGC Jacob' in a newly cleared area, where I wanted to establish a pocket garden.  The soil seemed okay, but not great.  Now, I wish I had planted the hellebore in the woodland where I have another H. niger.  Even though the latter hasn't bloomed since I allowed someone to divide it, at least the plant is alive.

But, I am definitely going to try 'HGC Jacob' again.  What a sight to look out on New Year's Day to see a bright white patch in the garden.  And my friend's bouquet was spectacular - big blossoms with prominent yellow stamens.

The above plant was mine in its first season, right at the end of a long blooming period.  I need to e-mail my friend and see how hers fared in yesterday's five degree temperature.  I had intended to contact her to see if she had cut all the flowers in advance.  I know that Helleborus x hybridus (formerly orientalis) withstands cold easily, even the open blossoms.  However, we haven't had such a low temperature since the mid-nineties.  I remember, because I had gone skiing in Colorado in early February with my tennis team.  When I returned, the daphne I had in a container on the back stoop had frozen.  I had called to remind my husband to bring it in, but he forgot.  I think we went down to four degrees then.

I know it's all part of gardening to lose things for unknown reasons.  I won't ever know if my 'HGC Jacob' had too much water or not enough.  I have an osmanthus nearby that hasn't grown a lick in four years.  It may be time to reconsider this area.  I definitely need to do something about the soil.

As soon as the weather gets better, I'm going to put down some layers of newspaper, leaves and manure and see if I can make the space more hospitable.  Of course, I should have done this when it was first cleared.  I might still have the flower Marsha gave me if I had.  But, I am for sure going to try this hellebore again.  I know Marsha still has hers, planted at the same time, so it's bound to work if I just put it in the right place.
Posted by Martha Smith Tate at 9:13 AM