Some possibilities for a special hydrangea 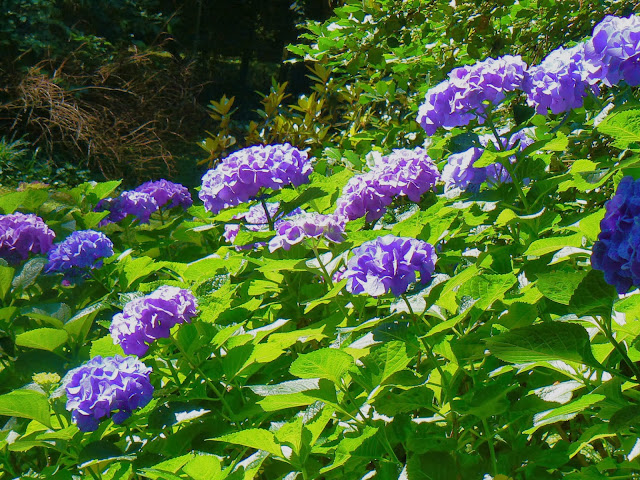 It was a bright, sunny June day when Kathryn MacDougald and I went to see Amy Carey Linton, who was our editor for A Gardener's Diary on HGTV (Kathryn and I produced the show for 11 years).  Amy moved into the Peachtree Hills neighborhood several years ago.  Her house sits overlooking a flood plain, which looks very much like an idyllic meadow scene you would find in the countryside.

Whoever lived in Amy's house before her had been a gardener, so Amy and her husband Gregg had a great time uncovering treasures.  This person had planted hydrangeas, among other shrubs and trees and ground covers.  I guess I had never been there when the hydrangeas were in bloom or I would not have had the shock of my life that June day.  Here was a huge stand of hydrangeas with such outsized blooms that you could hardly take in what you were seeing.  In one photograph, I have Kathryn's head next to a bloom, and they are the same size (Kathryn has a regular-sized head, I'm happy to say, although she was a chemistry major in college and is brilliant, so I'm sure her brain is bigger than mine).

Anyway, because it was a sunny day, and we were there at high noon, I couldn't get very good photographs.  And, just looking at the hydrangea blooms pictured above, you don't get the sense that some of them were eight to ten inches across.

I've seen both Hydrangea arborescens 'Annabelle' and H. paniculata 'Grandiflora' with larger blooms, but I had never seen what I call French hydrangeas (Hydrangea macrophylla) with such big flowers.

So, I need to keep one of my New Year's resolutions:  ask Amy if I can layer her hydrangea.  This is a method I'm sure many of you are familiar with.  You take a low branch, scrape a bit of bark off, make an indentation in the ground and force that part of the limb down.  Then you filter on some dirt and secure the branch with a brick or heavy stone.  The limb will produce roots, and when it is well established, you lop off the new plant from the original and dig it up.

I was so elated in early December when I discovered that an Abelia chinensis I had coveted along Margaret Moseley's driveway had taken root.  I haven't dug it up yet.  I want to decide on the right place for it here at my house.

The ground is frozen and inhospitable right now, but maybe next month I can go over to Amy's and put down a branch.  I bet by June I'd have a plant.  If this works,  I will certainly have a hydrangea to treasure, one that I could measure my head against, although I'm not sure if that's a good idea or not.
Posted by Martha Smith Tate at 8:01 AM