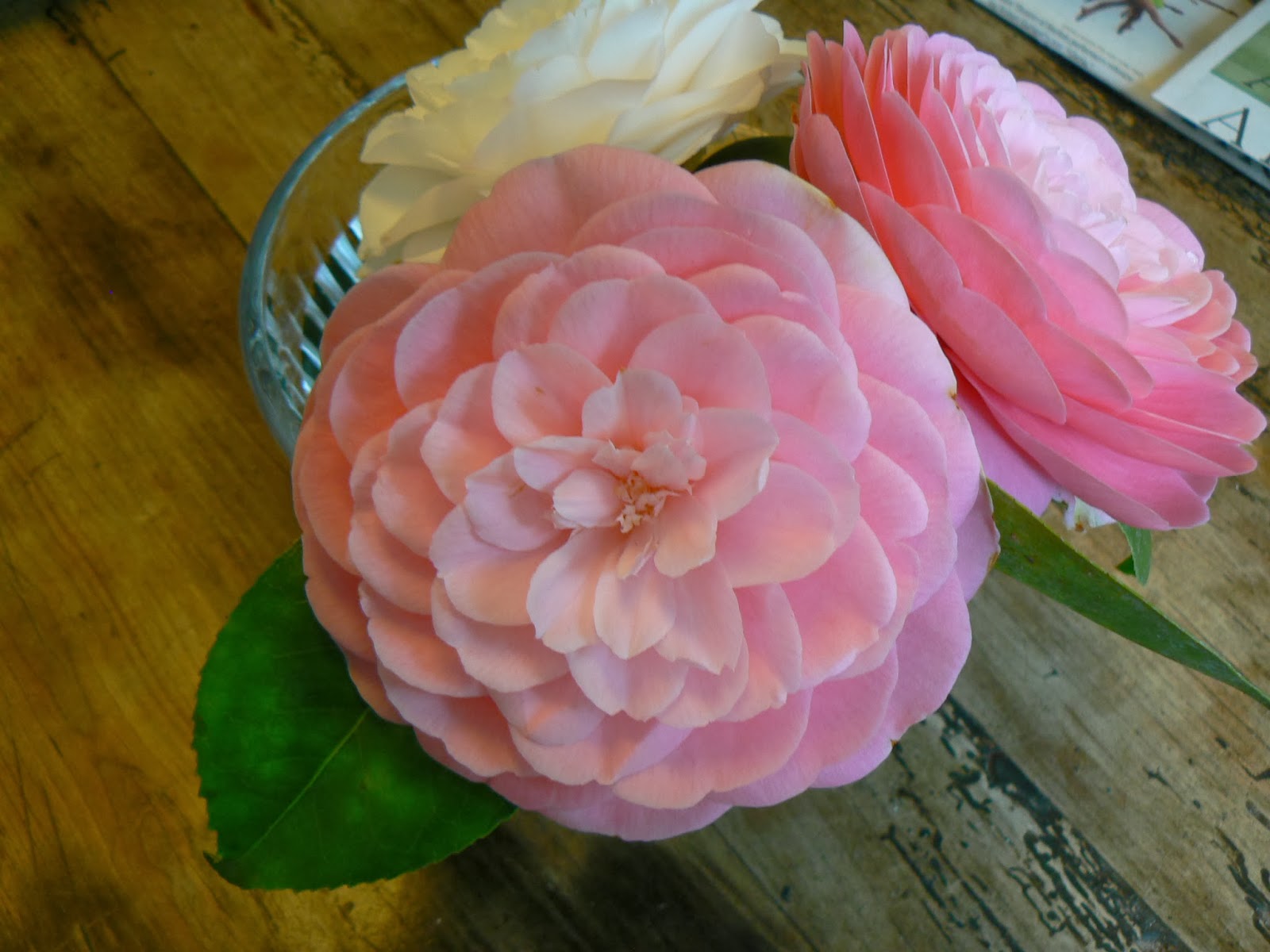 I have just come in from fighting a losing battle.  The temperature is dropping so fast, and the winds  have picked up.  After hauling bricks and bagged up newspapers and bringing out every sheet I have, I had to give up on trying to cover the camellias I planted in April.  Well, some of them, at least.

After years of wishing I had more space for camellias, I had an area cleared of scrub trees.  Then, I went shopping for camellias.  I found the above pink japonica at Walker Nursery Farms.  On the label it says 'Mary Hagood', but I can't find anything about it on the Internet (there is an 'Eleanor Hagood' that is similar).  The white one is Camellia japonica 'Seafoam'.  It is a pristine formal double with large, very double blooms.

At another nursery, I bought 'Pink Perfection', which has smaller, very perfect blooms.  I've always wanted this camellia, and just the other day, I picked my first "perfect" bloom.

So, when I heard the temperature might go to five degrees, I knew I was in trouble.  The camellias pictured above are tall and not very filled out, but they are loaded with buds.  I went out with the largest sheets I had, and there was no way I could cover them.  So, I did what I could.  'Pink Perfection' was short enough to cover, and I was able to wrap up two 'Cotton Candy' sasanquas.  I noticed, though, that the deer had taken a liking to the latter.  No wonder they didn't bloom this fall.  The critters have also nipped off a lot of the buds of Camellia x 'Taylor's Perfection'.  That one's been in the ground several years, so I'm hoping the roots will be okay.

All I can do now is hope that the new camellias, which I have mulched, will survive.  I think the numerous buds are going to freeze and fall off.  We shall see.

I didn't even try to do anything about all the fig vine on the west side of the house.  When it goes below 14 degrees, it is killed.  It should grow back from the roots, but it had looked so pretty on the walls of the terrace.  Also, I'm trying not to think about the evergreen star jasmine.  It's on the east side of the house, and when the sun hits it in the morning, it's going to fry.   In one season, it had gone half-way over two of the new iron arches.  Oh well.

Once, when I was so overwhelmed with so much going on, someone said to me, "All you can do is all you can do."  I don't know how I could have wrapped those tall camellias.  I hate to think of them out there, facing the desicating winds with no protection.  But, all I could do has been done.  Time will tell if the plants survive this night.  I'll keep you updated.