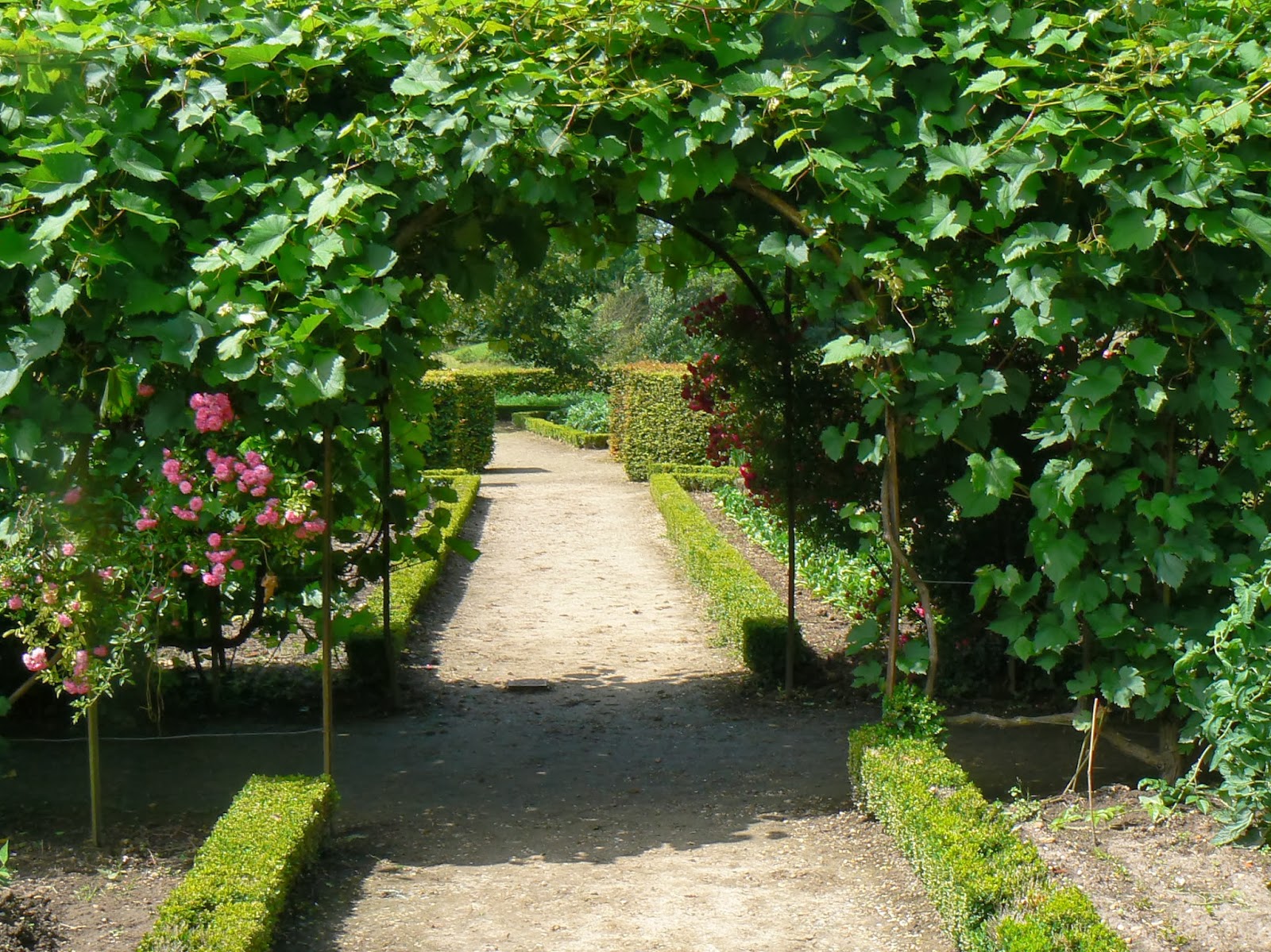 When I was little - actually this might have extended to my teenage years - my mother's family had a reunion every August at my great-grandparents' homestead.  The house is what they call in Georgia a "plantation saltbox."  It was built before the war, and I always got goosebumps looking at the bullet holes in the back hall, allegedly put there by the Yankees.

The house sat on a hill overlooking rolling pastures that led down to the Chattahoochee River.  It was halfway between the communities of Rico and Roscoe and was a fun house to explore.   At the top of the narrow staircase sat an enormous, spidery-looking spinning wheel.  I was fascinated with this contraption and always ran to see it first, even before I looked at the bullet holes.

In the back yard was my favorite feature - a large, rectangular grape arbor.  Grape in this case meaning scuppernongs and muscadines.  In August, the scuppernongs (the light greenish-brown grapes) were ripe, and in spite of the bees zigzagging all around, my cousins and I would stand there grazing until we were called to the side yard to have a lunch of Melear's barbeque and Brunswick stew (this was a famous barbeque place owned by my parents' friend Mr. Bill Melear.  For me, there will never be any other authentic barbeque - his was the ultimate).

But back to the scuppernongs.  They were so plump and sweet and delicious.  You'd take one and squeeze the pulp into your mouth (you never ate the thick skins, or at least I didn't), and it was heavenly.  When my parents moved to the farm, Daddy put up two long rows of scuppernong vines.  It was a lot easier to reach the fruit this way, but it wasn't nearly as pretty as an arbor, and the experience not quite as exciting as reaching up for the grapes.

I took this photograph in France, which explains all those little hedges in a vegetable garden.  Right now is the time to plant scuppernongs, but I don't think it's going to happen this year.  I need to figure out how to have something pretty like this.  Daddy's vines and the wires are gone now, and there is a lawn in their place.  I only visit the farm on the weekends, so would I be able to keep up with an arbor?  I wish I had enough sun and flat space here in Atlanta to do a mini-vision of the above scene.  I would even be willing to clip those hedges.

I think I'll show this photograph to the man who tends the vegetable gardens at the farm.  I know he could build a similar arbor, and maybe we could put it where Daddy had the vines.  There's plenty of full sun there, and a water source isn't too far away.  I need to do some research and find out how to grow scuppernongs.  I know you have to cut the vines back in winter, but that's the extent of my knowledge. I was never interested in growing scuppernongs, but I certainly enjoyed eating them.  Now, I'm wishing the vines could be pretty, too.

Note:  After my great-aunt Abby (she lived in the house) went to a nursing home, the homeplace was sold.  My relatives gathered there to auction off the contents among the family.  The spinning wheel was long gone.  Some American Picker types had routinely stopped by to talk Aunt Abby out of the valuable things.  I have an antique egg basket that I suppose my great-grandmother used and a feed sack with a rooster printed on it (only I can't find what I did with it).  I also have a churn and a milking stool.  By the time we had the sale, the arbor had fallen in.  A sad ending, indeed.