A clean slate for the New Year 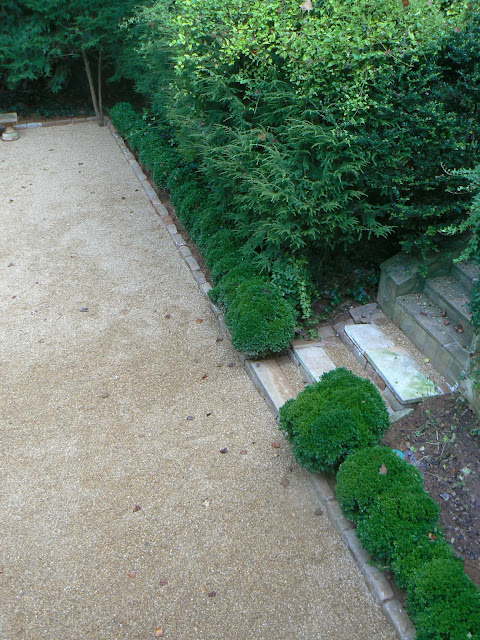 I really ought to show you the "before" of this picture.  For years, I've looked down from my back terrace at a depressing sight.  Back in 2002, after all the zoysia grass had given over to sparse weeds in this rectangle, I bought some black landscape cloth and covered the entire space.  I'm not sure what I had in mind, but I didn't have a lawnmower, and it wasn't worth getting one to cut crab grass and assorted other weeds.

So, I left things as they were - for nine years.  Three summers ago, I gathered all the cobblestones I could find around the house and outlined three beds in the middle, a sort of crude parterre.  I built up some soil and planted tomatoes in the centers of the two squares and one rectangle, thinking I had pretty good sun.

The tomato vines grew too tall and flopped over, despite my having installed supports.  The next year, I planted zinnias.  They,too, reached for the sun and were thin and spindly.  I had to admit there weren't enough hours of sun to grow vegetables or sun-loving flowers.  This year, I left everything blank, and grew another crop of weeds.

But in September, I realized that I needed a space for my daughter to have a small wedding ceremony in early October.  I had thought another area on the other side of the house would work, but the "crowd" she wanted turned from six to 25 people.

So, two workers came.  They used the cobblestones from the middle and went down to the farm to bring more (I used to have 4,000 in my front parking court; they sank, and I had them removed).  The stones were installed at the base of single row of dwarf English boxwood on either side.  Behind the low box hedge, surrounding the area, is a tall hemlock hedge (I had originally copied a picture of a garden in France, thus the effort to grow grass and the two layers of hedges).

The space turned out better than I could have imagined and only took a couple of days to accomplish.  The wedding went off perfectly, with room for a cello and violin and 25 white folding chairs.

But now, I'm left with a blank slate.  I love looking down at the space.  For the moment, there's a bench at the end (but not a pretty one).  I bought a wire arch and borrowed two matching wire topiary forms to make an altar.  They're still there, but I'm going to move the arch over to the base of the steps, just behind the boxwoods.

Then, I'm going to plant a 'Climbing Iceberg' rose on the trellis, hoping I can keep the anti-deer spraying up.  Now, right behind the boxwoods near the steps, there is a strip where I get more sun than in the middle of the rectangle.  Just as soon as I clean up from the holidays, I'm going to get out there and work on the soil.  Right now, I plan to sow some larkspur seeds, although it's a bit late for that.  Then, maybe if the larkspurs work, I can pull them up in June and try zinnias again.

For now, I'm loving the view from the end of the terrace.  It's like looking down on an organized space that is somehow soothing in its blankness.  I think I'm so chaotic and disorganized that this new gravel "garden" gives me a sense of peace - at least for now, until I figure out all the possibilities.  I hope I won't mess it all up.