"This Christmastide" was back! 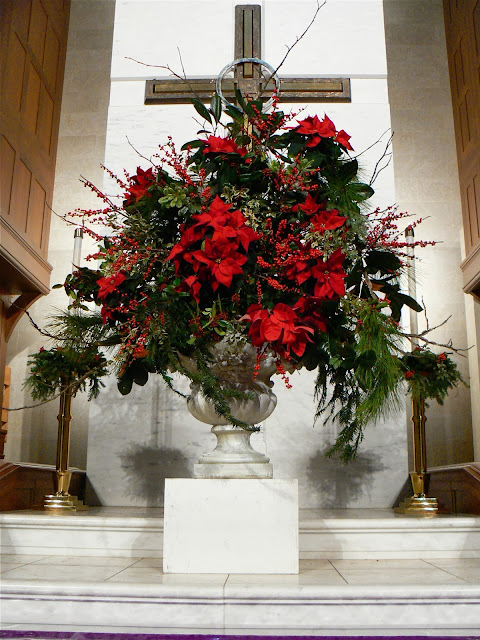 The Sunday before Christmas is a special time at my church.  By that day, all of the decorations are up, and the church looks beautiful.  The huge Christmon tree in the sanctuary twinkles with lights, and the limestone columns and transepts are hung with wreathes and garland. On the altar is a giant arrangement (with greenery from my yard and from the farm).  It is really quite magical.

But, in recent years, something has been missing.  My family joined this church (we have something like 7,000 members) some 25 years ago.  For some reason, Peachtree Road United Methodist did not seem all that big.  It had a small town feel, and the music was out of this world.

Soon after we joined, the choir started the tradition of singing a very beautiful Christmas song called "This Christmastide" (also known as "Jessye's Carol").  A lovely piano introduction led off, and then a soprano began a solo.  She was joined then by the choir or an ensemble.  The song has several verses, and there is a big buildup towards the end.  Then, the last verse is sung quietly again by the soprano.  It is one of the most beautiful Christmas songs I've ever heard.

One reason that it is so special to me is that my late husband and my children loved it so.  At the end of the sermon on that last Sunday of Advent, you'd hear the introduction, and the four of us would squeeze hands and hold each other during the lovely melody.  My husband was not the type to do this sort of thing, but he, too, fell under the spell of "This Christmastide."  The song was performed again on Christmas Eve, and we'd hold hands once again, there in the dark with the lighted trees.

My husband died suddenly in the summer of 1999.  That Christmas, my daughters and I kept up our tradition of holding hands while listening to this song that had so much meaning for us.

One Sunday a few years ago, my older daughter flew home from New York in time for the Sunday service, and my younger daughter had driven home from law school in Charlottesville, Virginia, to be there to attend the service to hear "This Christmastide."  I had a supply of tissues ready, which we always needed.  But then sermon was over, and the final hymn began.  No "This Christmastide."

I couldn't believe it.  Another friend who considered this song a Peachtree Road tradition was equally upset.  He and I rushed up to our new minister to ask him what happened.  He had never heard of the song and knew nothing about it.

In the years that followed, there were a couple of abbreviated renditions with a soloist, which had none of the drama of the crescendos, and bore no resemblance to the original.  I obtained a copy of the music and would play it on Christmas Eve when a family from our church joined us for dinner.  But, none of us could sing, so I ordered several recordings from ITunes.  Nothing came close to the Peachtree Road choir.

My older daughter and her husband arrived this past Friday night, so as we rode to church on Sunday, I told her not to expect "This Christmastide."  It was okay, she said.

But, at the end of the sermon, Scott, our choirmaster came down to the chancel piano along with several members of the choir.  Could it be?  Then the familiar arpeggios began, and I grabbed my daughter's hand.  All of the past Christmases came rushing back, sitting there, the four of us - our original family - on the pew in the old sanctuary, holding hands and misty-eyed, in the quiet of the moment of this great season:

"Green and silver, red and gold.
And a story born of old.
Truth and love and hope abide,
This Christmastide."