Floors from long ago 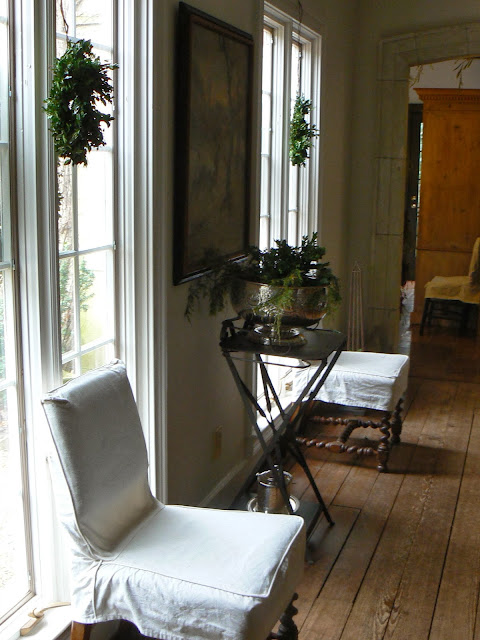 Obviously, I had not put any effort into the greenery in the silver punch bowl, and my boxwood wreathes weren't my best effort, but this is not about anything to do with a garden.  It's about the floors of my dining room.

Today is my daddy's birthday.  He was born in 1911 and lived until just a few weeks shy of age 93.  By the end, he had dementia, but it had not robbed him of his sense of humor, nor of his get-up-and-go attitude.

I look back now and think how hard he worked and how much energy he had.  Every year when we would take our annual vacation to Florida, he would hook our boat to the back of our station wagon so he could take us water skiing on the intercoastal waterway.  He and Mother went to every football game my brother ever played in, and they were president of every parents' organization that existed.  One time, Daddy played in a basketball game against our high school teachers.  Just as the final buzzer rang, he, with his ridiculously baggy shorts, threw the ball from half-court and made the basket.  The crowd went wild.

Daddy grew up on a farm, and from what I could glean from the stories my mother would tell, he was pretty much neglected as a child.  His two siblings were at least 20 years older than he.  When he went to first grade, he learned that if you put up a Christmas tree, Santa Claus would come and leave you oranges and candy and a toy.

So, when he was six, he went out into the woods and cut down a holly tree with red berries.  He put it up on Christmas Eve and hung a stocking by the chimney.  That next morning he ran in to find everything as it was.  No candy or oranges or toys.

I think this is why he spoiled my brother and me so at Christmas.  He was the mayor of our town, and he had a painted wooden three-dimensional sleigh and reindeer installed atop the community center.  He strung lights across the highway that said "Merry Christmas".  He did the same at our house.

But back to the floors.  We grew up in an 1852 brick house in town.  It was in the middle of five acres, with all kinds of vegetable gardens and lawns and places for hide and seek.  At the back, Daddy planted an apple orchard and made a fenced-in pasture so my brother and I could have a horse.

Next door to us lived an eccentric lady who dressed in a man's overcoat and shoes.  Her house was old, too.  After my parents moved out to the farm, the old lady died, and her house was abandoned.  I was starting to save materials to build our house here in Atlanta, when I thought about Miss Janie Mae's wooden floors.  I asked Daddy if he would see if they could be salvaged.  He told me that the fire department was about to burn her house for practice.

So, before they had the chance to put a torch to her historic home, presumably built in 1866, he went over and got all the heart pine floors that had not rotted.  In my house in Atlanta, I have wide boards in three rooms (they came from the ceiling of the attic), and the floors you see here in my dining room and living room.  The wood sat for years in an airplane hangar on the farm until we built our house.  The individual boards were like lead, very thick and dense.

I've thought about Daddy all day, realizing that it was he who got the windows and doors for us, in addition to the wood for the frame of our house.  When I wanted cobblestones for the courtyard, he took one of the dump trucks from his business, and he and my husband picked up 4,000 of the Belgian granite blocks that had been in downtown Atlanta.

I love the floors in my house.  I had wanted to restore an old home, but we had this property, and having the old materials (we used slate that came from a school house in Hapeville, Georgia, for the roof) helped the house look old from the beginning.

So, thank you, Daddy, for getting that crowbar and saving those 150-year-old boards from extinction.  They always look good at Christmas with all the greenery and always remind me of a dear man who did so much for his family.