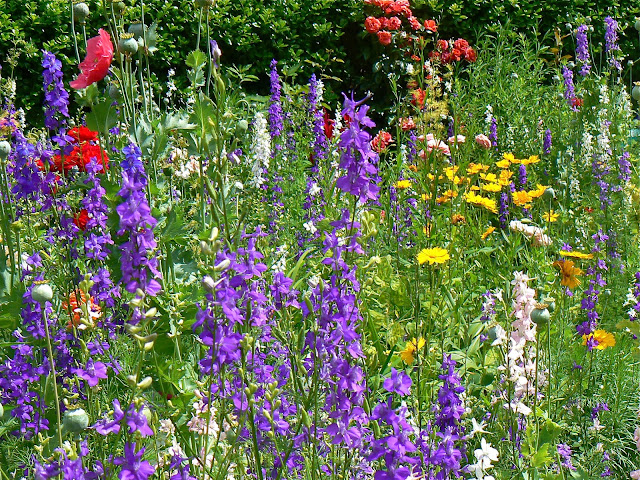 Here in the South, cool season annuals like poppies, larkspur and bachelor's buttons need to be planted in the fall for bloom the following May.  Margaret Moseley's daughter Carol is re-doing Margaret's famed poppy patch (it was on the cover of two of Southern Living's books) at the back of Margaret's garden, and we're using seeds from my own mother's poppies.

Carol had the space plowed and and raked over, so that it is now only smooth, bare earth.  If you throw poppy seeds into grass, especially tall grass, they won't germinate.  I learned from expert poppy grower Ruth Mitchell that the tiny seeds need sunlight to germinate.  They also need smooth, bare ground.

Margaret, who is 97, kept her poppies going for decades.  The original seeds came from a plant given to her by an elderly friend from her youth.  In the last few years, the poppies have steadily declined, and grass has taken over.

I suspect now that the ground is clear, Margaret's own seeds will emerge.  That's what happened to my mother's poppies.  Her flower garden became overgrown with weeds, and not a single poppy bloomed for several years.  Then, I finally took the time to clean out the garden, and presto, the next May there were lots and lots of Mother's shaggy, cherry-colored flowers.  The seeds were there all along.

I contacted Diana Mendes to see if she had saved any larkspur seeds.  Those are her plants in the above photograph of her spectacular May garden.  Margaret also had larkspur growing with her poppies.

Diana had not specifically saved any seed - hers re-seed every year without having to save any extra.  I'm going to a couple of stores tomorrow to see if there are any packets of larkspur for sale.  For years, I took the Farmers and Consumers Market Bulletin, published by the Georgia Department of Agriculture.  I knew there was an on-line edition, so I thought I'd see if any ads for larkspur seeds were in the Flowers For Sale section.  I was stopped abruptly when I tried to log in because I am not a subscriber.  Now, one must pay for a subscription, so I wonder if many people are placing ads for seeds these days.

Most likely, some of Margaret's larkspur seeds will germinate.  I'm sure they are hidden there in the ground with the poppy seeds.  But, I think for good measure, I'll try to find a packet or two.  By next April, we ought to know if the larkspur came through, if I don't find any to buy.  I'd rather be safe than sorry, though, so I am going to try to come up with some.  I'll issue a report on the progress next spring.  I think by next May, Margaret will have a brilliant poppy patch once again at the back of her garden.
Posted by Martha Smith Tate at 1:10 PM No comments: