One yellow reminds me of another 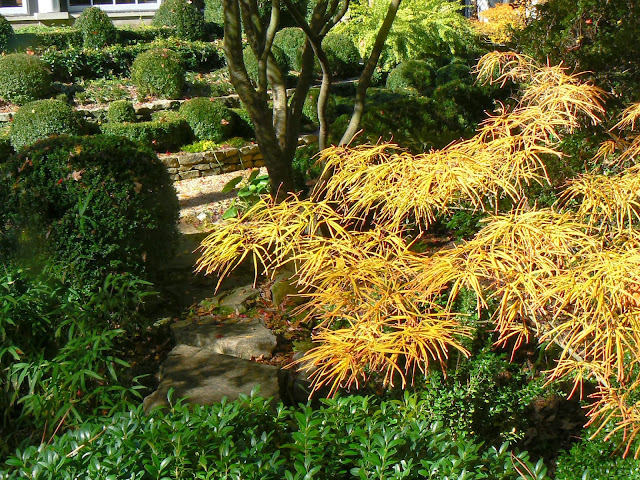 A lot of the trees are bare now, but the ones that still have leaves are quite spectacular.  It's that last gasp of what we consider autumn (although we have another month left before winter officially arrives).

Yesterday, I went roaming onto my new neighbor's property.  I don't know the name of the person who purchased the six acres next to me, but I do know that he lives on the other side of the world.  What he plans to do with what is a rather historic piece of land, I can't imagine.  The house has been vacant now for months.

So, I thought it would be okay to go up the hill and cut the wisteria back.   It's threatening both of us, and the more I can get rid of or at least make sure it won't bloom next year, the better (I understand if you cut the vines after August, you cut off next year's flowers; let's hope so).

Anyway, I decided it would be okay if I walked around and looked to see what was there.  This is the better half (property-wise) of an estate that belonged to a Georgia governor in the late 19th century.  The grounds are so beautiful.  It breaks my heart to see the venerable landscape going to ruin. There are giant, ancient boxwoods. There's a huge yew (or could it be a cephalotaxus? We don't have many yews around here).  I stopped and pulled English ivy from the base of a very old hemlock that is magnificent.

I didn't think there was anything really unusual, plant-wise, but I was curious.  There is a yellow wood tree (Cladrastris kentukea) that used to bloom every other year.  I know this from my former neighbors, the ones before the woman who just owned the property and sold it to the foreign investor.

But, as I came down some 120-year-old granite steps, I was startled to see the native yellow witch hazel (Hamamelis virginiana) absolutely covered in blooms.  There were two very large specimens, maybe 15 feet tall.  I remember when my friends Erica Glasener and Kathryn MacDougald were coming back from Virginia where they'd been on an HGTV shoot for A Gardener's Diary and stopped and took slides of some wild witch hazels.  I was irritated that they took so many with my camera and that we couldn't really use them.  But, they were thrilled to stumble upon this fall-blooming shrub in the wild.

I didn't get a picture of the witch hazels next door.  It was  getting dark, and I didn't have my camera.  Besides, the flowers don't show up much because of the other fall colors around.  In fact, I had walked up those same steps only a half hour before and hadn't even noticed the odd, but very prolific yellow flowers.

So, I have picked out the photograph above to illustrate the color of the blossoms.  And, these finely cut leaves of a Japanese maple sort of mimic the odd, spidery blooms of the witch hazel.

If I have the nerve to sneak back up there, I'll see if I can get some close-ups of the flowers.  This time, though, I'm going to wear my tall rubber boots.  I guess my punishment for trespassing was an encounter with something in the tall grasses that made me itch all over like crazy.

One last comment.  I will be interested to see if the mysterious foreigner (alleged to be a billionaire) ever shows up.  Eventually, I'm thinking someone will tear down the dated modern house built there in the late 1950's.  I just hope they'll be respectful of the landscape.  It is truly one of the gems of this part of the world.  To be continued...
Posted by Martha Smith Tate at 8:35 AM No comments: