A wolf in sheep's clothing 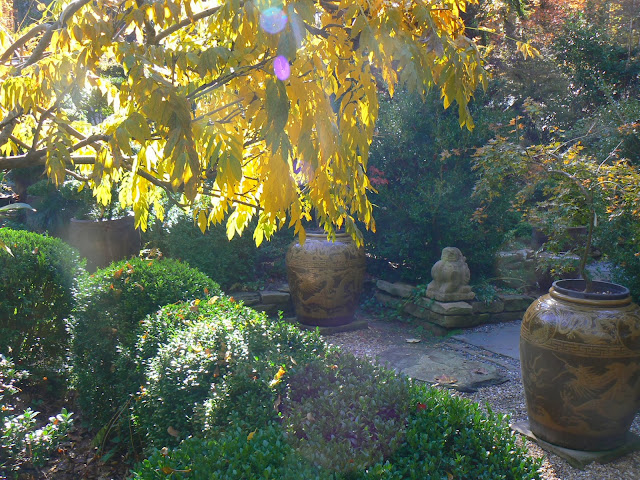 The first spring I lived on this property, I thought I had fallen into a fairyland.  When April came, the tall trees surrounding the little cottage - the latter 1/5 mile from the street and hidden in the woods - were festooned with magnificent lavender blossoms that formed a vast, high canopy overhead.

The flowers looked like clusters of grapes.  They were tangled in every tree, high and low, and were suspended from great, thick ropes that wound through the branches and went from tree top to tree top.  You could look up, and it seemed like you were in a vast and magical purple mansion that went on and on.

It wasn't long until I realized that the scented blossoms of Chinese wisteria were part of a sinister plot to ruin everything around me.  Every shrub I planted became choked by this insidious monster.  On the bank where someone before me had planted scores of daffodils, the vines grew up and covered the tender foliage that already had to make it up through a blanket of English ivy.  I began a serious war with wisteria that has lasted for decades and which I have not yet won.

Year before last, I noticed that the evil pods, so innocently covered with tan suede, had popped open in February and spread the dark brown glossy seeds everywhere.  I could only get to those that happened to fall in the driveway or in the parking lot at the cottage.  The rest were hopelessly lost in the woods.

The pods are bursting open and coming down early this year.  I've been picking them up for a week now.  I don't know if this means anything about the winter (I did see a black, fuzzy caterpillar the other day; isn't that a sign of a bad time to come?).  But, I do know that the amount of seeds raining down with the falling leaves means more wisteria to come up and wrap around trees faster than I can even spot the impossible-to-pull-up vines.

Soon, the leaves will turn yellow, like the innocent-looking ones above.  There is a very narrow window when you can distinguish the vines from whatever they are choking.  I cut down everything I see to the ground.  In the past, this hacking away has only slightly helped me in my war against the invader.  This year, though, I'm afraid the pods have made sure there'll be a generous new crop.

Long ago, I envisioned training everything into lovely wisteria trees.  Now, I don't dare even try.  I even bought four plants to go on an iron arbor.  I ended up cutting them all down, as they wound so tightly around the upright poles that I feared the thick trunks would pull the structure down.

Today, I'll set out again to see if I can spot any pods that haven't opened.  Maybe by stopping them now, I can save myself some time and trouble next spring, when the seedlings emerge.  There's a tiny window then, too, when you can still pull the new vines out of the ground.

I'm afraid I'm going to be fighting this battle for a long time.  I went to pick some variegated pittosporum the other day, and in just a few short months, the vines had crept up and were strangling the shrub.   How can anything so beautiful and seemingly innocent in the spring be so strong and evil the rest of the year?
Posted by Martha Smith Tate at 7:38 AM No comments: