No peanut butter sandwich this year 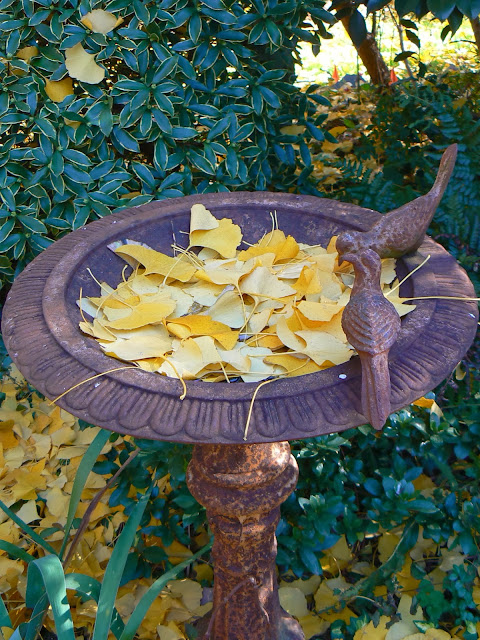 The call came unexpectedly this afternoon.

"I won't be having a peanut butter sandwich at home this Thanksgiving," declared 97-year-old Magaret Moseley.  "That 29 degree weather did the ginkgo leaves in.  They fell before they had all turned yellow."

I could hear frustration and disappointment in her voice.

"I wait all year, and then this happens," she said.

I felt bad because I know how Margaret watches her tree like a hawk.  When all the leaves are golden, she will not leave the house under any circumstance, not even for Thanksgiving dinner with her family.  She won't budge until she gets to see the spectacle of the silky fan-shaped leaves cascade down all at once.

In a normal year, the leaves from the tree she planted 30 years ago follow the same pattern in November.  "You see one leaf drifting down, you'd better get ready for the show," she had explained in the past.  "It only takes about an hour, and they just come raining down.  I wouldn't miss that sight for the world."

This morning, I had noticed a tree on my route to church.  It had been way ahead of Margaret's in coloring.  The branches were bare, and the leaves had been removed, all except for a little circle at the base of the trunk.  I'd also been watching another, much bigger tree.  Like Margaret's, it had been slow to turn this year.  Last week, I noticed it was beginning to show signs of yellow.  If I'd thought about it today, I'd have taken that route to see if that tree had succumbed to the cold.

But, for Margaret, it was a disappointing year.  The leaves are all down, but they are not all yellow.  So, I'm glad I got there in a timely fashion last year to take pictures.

Now, about that rusty iron birdbath pictured above.  In my book, Margaret Moseley's A Garden to Remember, I included a section about funny episodes involving Margaret.  I did not put in about the birdbath, though.

The story is that I took my computer out to Margaret's to show her some 400+ digital photographs I had taken of her garden (we're not even talking about the hundreds of slides I have from the old days).  She kept seeing that I had photographed this birdbath a lot, and she finally asked me if I was hinting for her to leave it to me in her will.  I had it in spring, with blue Scilla hispanica at its base.  In fall, when most of the other ground covers had disappeared, the large Ajuga reptans 'Caitlin's Giant' shows off the rich, rusty color.  In winter, it is backed by a daphne (also in this photograph) and Margaret's newest pet camellia, 'C. M. Wilson'.

One time I was out there and noticed she had a copper iris growing up around it, and combined with the coppery new foliage of autumn fern, the combination was stunning.  A few years passed, and I saw that she'd planted the light apricot-colored Iris 'Beverly Sills', which made a striking contrast, as well.

Maybe my favorite incarnation, though, is the photograph above, with the simple ginkgo leaves that have landed next to the rusty birds.

Every time Margaret sees one of my birdbath photographs, we get tickled.  "There's your birdbath," she'll say.  I promise I did not have my eye on that birdbath for myself.  It was given to her by her dear friend Phyllis McGuinn.  But, now that the joke has gone this far, I wouldn't mind putting my name on it.  The only thing is that given Margaret's sense of fun and her passion for gardening that still burns so brightly, she could well outlive me.

In the meantime, I'll just enjoy looking to see what Margaret has done with the birdbath.  One day I was out there, and she had floated camellia blossoms in it.  I accused her of tantalizing me.

Seriously, I hope that birdbath stays put for a long time.  When Margaret says, "I can't wait to get up every morning and put one foot in front of another so I can look out at my garden," I have no doubt that it will.