Is it okay not to be a native? 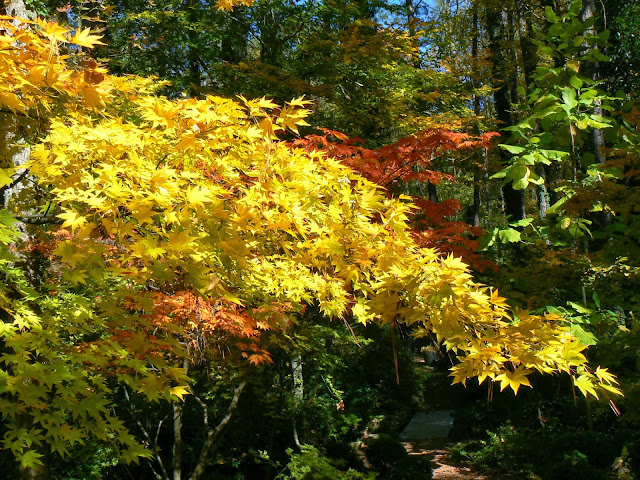 Someone - I can't remember who- said years ago that the state of Georgia would not look the same if it weren't for China and Japan.  The person was referring mostly to spring flowers, mainly azaleas and cherry trees.  While we have lovely, very desirable native azaleas and some from Florida that are showy, it's mostly the azaleas from Japan that make Atlanta look like a fairyland in spring.

While it's true that many exotics (by that, I mean from foreign lands) are highly ornamental, that's not to say that we don't have our own extraordinary beauty here, in the fall and in the spring.

Take my street, for example.  Last week, the leaves changed all of a sudden.  The hickories turned bright golden yellow, and the sourwoods and maples became gorgeous blends of orange and red and yellow.  There's one tree that I love that is sort of coral orange, and when it is backlit by the sun, it is breathtaking.  (Oops, I know what it is, but I can't think at the moment).

My neighborhood has a lot of beech trees, but they turn a bit later.  I always bring in some branches for Thanksgiving and throw in some bittersweet and rose hips for a dining room arrangement.

So, is it okay to have trees and shrubs from foreign lands invade our landscapes in the fall?  I say yes.  I confess that Japanese maples do not fit with my house or my woods.  I had one, grown from a seedling, that I gave away.  It just didn't look right here.

At one time, there was a person around town that we journalists called the "Native Plant Nazi."  Many times when I would feature a plant from another country in my column in the newspaper, she would call me up and scold me.  I heard her say once that if she saw an ox-eye daisy, she would destroy it.  Those are the white daisies that have naturalized in the meadows and along roadsides in the South.  When I was growing up, the people next door had a lovely little field just covered in the flowers.  I confess I snuck (is there such a word?) under their barbed wire fence many times to pick bouquets.

What does this have to do with the above photograph?  Obviously, the blinding yellow and orange trees are Japanese maples.  Who can begrudge those colors?  The owner of these trees has them scattered all about his wooded property, where he has plenty of native trees, as well.  He has not disturbed what is growing there.

In this scene, you can also see a native American tree on the right (still green), one of the big-leaf, deciduous magnolias.  I'm not sure which one this is, but I think it is Magnolia macrophylla.  I know he has a much bigger one on down this same path.

Don Shadow, a great plantsman from Winchester, Tennessee, who has supplied many nurseries and landscapes all over the country from his wholesale operation, once said he never believed in hoarding a plant.  In other words, if someone discovered a sport on a shrub, but kept it for himself so he'd have the only one in existence, he thought that to be egregious.

Don has plants from all over the world in his nursery.  I remember seeing a Davidia involucrata (i.e. dove tree; handkerchief tree) out in front of his office.  Some explorer friends of mine went to the very spot where E.H. Wilson had found a grove of them in China.  That must have been a breathtaking sight to come upon these unusual trees in the wild.  Before Wilson, only single specimens had been found, first by Pere Armand David, a French missionary who lived in China (think Clematis armandii).

Also, Don had rows and rows of the Chinese fringe tree (Chionanthus retusus), which is a beautiful spring tree.  There is a large specimen at the Augusta National, and to catch it backlit in bloom is absolutely breathtaking.

I've rambled here, but I just wanted to say that fall color can come from the leaves of so many or our own trees, from the glorious foliage of the native oakleaf hydrangea and the indigenous climbing hydangea,Decumaria barbara , but just as well from the foreign Japanese Solomon's seal the crepe myrtles that turn a spectacular orange.

Frankly, I like just about anything from anywhere, and I greatly appreciate the risks explorers took to bring them to us.  Therefore, my answer to the title question:  "Yes, it's okay not to be a native, as long as we celebrate and revere our own home-grown beauty."
Posted by Martha Smith Tate at 3:44 PM 1 comment: