More than one meaning for All Saints Day 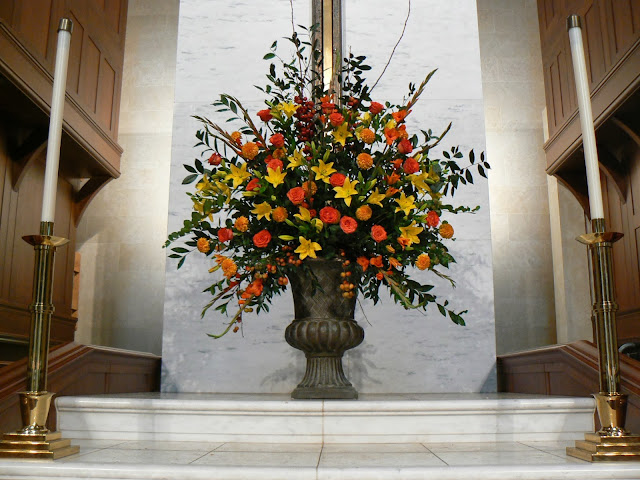 Yesterday, we celebrated All Saints Day at our church.  This day is special to me for a number of reasons.  One, my late husband loved the service because we always sang his favorite hymn, "For All the Saints."  And, two, this is the day in 2001 when I realized that we didn't have to endure pink carnations and glads on our altar during the month of November, when there should be fall colors instead.

That Sunday, two years after my husband died suddenly in 1999, All Saints Episcopal, a century-old church in downtown Atlanta,  held a flower festival.  There were all sorts of fall branches and hydrangeas in their autumn colors mixed in with greenery like camellia foliage.  There was not a pink flower in evidence.  All the roses were orange or rust-colored, and great balls of orange and red bittersweet hung from the ceiling.  People had brought scarlet oak leaves from their homes and colorful berries from viburnums and callicarpas.   There were even a few fuzzy tall blue ageratums, the bane of some gardeners (the flowers spread like crazy and show up in autumn where you don't want them).  Surprisingly, they looked natural among all the other leaves and branches.

Long story short, I tackled David Lowe, the head of the All Saints Flower Guild to get information on how they accomplished such a display with volunteers.  Then, I went to our minister that week and told him what I had seen. He said he had wanted to start a flower guild when he first came to our church.  Two weeks later, on what we call Harvest Sunday (the Sunday before Thanksgiving), I walked into our church,  On the altar were yet another two arrangements of pink carnations and glads, shaped in a rigid triangle.  That did it.  Along with another person who is very organized (I have the unorganized brain, whichever side that is), we started the Peachtree Road United Methodist Flower Guild.

Fast forward to yesterday, November 3, 2013.  The opening hymn was "For All the Saints".  Next, candles were lit as the names were called of church members who had died in 2013. Then, from the back of the church, a lone bagpiper in a kilt came down the aisle playing Antonin Dvorak's "Going Home".  This was another song my husband loved and always joked that he wanted at his funeral.  Little did we know that it would come so suddenly and so soon.  We didn't have bagpipes at his service, but our organist played both "Going Home" and "For All the Saints."

The flowers shown above were actually not on the altar yesterday.  They were arranged for the memorial service for a friend who died last week.  If you look closely, you'll see there are red crabapples in the top center of the arrangement.  Some orange ones are hanging down in front.  Another flower guild member and I chose the flowers to be bright and cheerful, but in colors that were consistent with the season.  I picked branches of Camellia sinensis and Lonicera fragrantissima at my house to use with the flowers.  We did break down and buy a few glads since we needed something thin and pointed to make the lines.  Included in the arrangement are orange-coral roses, yellow and orange Asiatic lilies, and a few rust-colored chrysanthemums.

This was my first foray into arranging.  I always bring the foliage, but I watch the others on my Flower Guild team create the arrangement.  I can tell what's wrong, but I don't know how to start from scratch.  Donna Ludtke, head of the Flower Guild, and I kept saying, "Remember the triangle."  Arrangements that are rounded or vase-shaped do not look right on our altar.  I'm okay with the triangle, as long it doesn't look like those timeworn pink arrangements we used to have in our old sanctuary.

This coming Harvest Sunday, we're going to have a giant cornucopia on the altar.  We did that the first year in our new sanctuary when the Flower Guild had been going for a few months.  Yesterday, I picked some green pumpkins at the farm.  Some other members went to an after-Halloween sale and bought plenty of gourds and all manner of pumpkins.  I need to visit my new source of bittersweet.  Last year, some people honked their horns at me.  I think they wondered what a woman of my age was doing leaning against a steep bank on a busy road.  I'll post the results here, if I live to tell about it.