Something about that last rose of the season 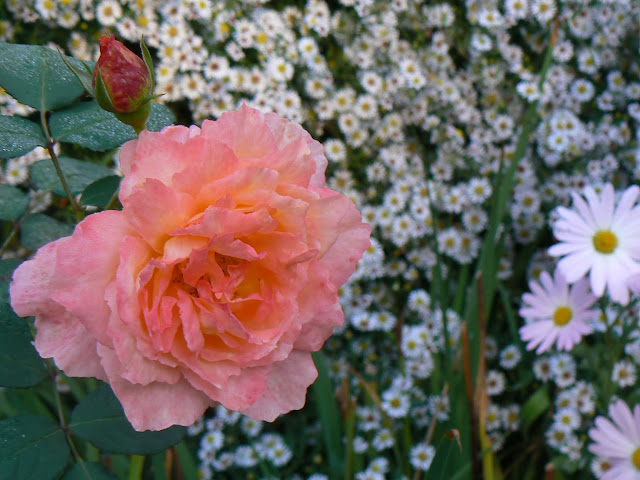 I guess it was the weather today - unexpectedly cloudy and drizzly when sunshine had been promised. Or, maybe I woke up on the wrong side of the bed, but I felt a bit sad about the coming of November.  A couple of days ago, I came across this photograph taken last October 25th in Diana Mendes' Atlanta garden.  You can see the asters and chrysanthemums in the background.  I don't think we'd had a freeze then.

I went to the farm yesterday (Sunday), and it was a beautiful, mild day.  Leonardo and his family and friends were laying out the red beans, ready to be shelled.  Last week, the black bean harvest came in. But, last Friday morning, the season for anything tender was over.  The fig tree was loaded with green figs, but the foliage had melted.  So had the squash and pumpkin vines and the pepper plants.

My parents would be happy that someone is enjoying growing vegetables as much as they did.  Of course, they were more into black-eyed peas and pole beans and yellow crook-necked squash.  The odd-looking squash Leonardo had planted looked like giant snakes coiled and ready to strike.

But, the happiest thing of all was that I looked over, and there were numerous large green pumpkins - the kind you see at stands, but they cost more than the regular orange ones.  He has promised to let me borrow them for our Flower Guild luncheon at church Sunday week and to keep them until the Sunday before Thanksgiving.  That's when we'll put a giant cornucopia on the altar and have pumpkins, gourds, squash and chrysanthemums spilling out.  I'm happy that I'll be able to furnish green pumpkins.  I'll give them back, though, so Leonardo can save the seed so we can have them again next year.  He got the pumpkins from a client who was throwing them away last year.  Leonardo's wife made a delicious dish from the flesh, and he saved the seed.  I never knew I would be so thrilled over homegrown green pumpkins.

Back to the above rose.  Diana says that despite all the rain we had this season (spring and summer), that her roses weren't particularly good.  And, everything else grew so tall that things were flopping over.  She had dahlias, Mexican sage, all manner of daisy chrysanthemums, several different asters and lots of roses.

The change of seasons, especially when we go from summer into fall and fall into winter, can sometimes catch me in a blue mood.  For what, I don't know.  I love fall; I love the leaves turning and beginning to come down.  It could be that it's pitch dark when I wake up and walk to the street every morning to get the paper.

Tomorrow, they're promising sunshine and warmer temperatures.  I hope I'll get a chance to get out and clean out around some foxgloves that have reseeded and looking very robust.  I'm thinking about moving some "junior size" hellebores that have grown up around the larger plants.  I've been cooped up with this computer for several weeks now (plus working on my daughter's wedding and then my taxes, followed by a program I gave and the preparation involved), so I need to get outside.

I think weeding and cleaning up will give me a boost.  It's a waste to spend this glorious time of year inside with your chin on the floor for no particular reason.  A bit of gardening, I believe, will drive this malaise away.  There's just nothing like getting out there and fiddling with plants to cure the blues.


Posted by Martha Smith Tate at 3:30 PM No comments: