Hydrangeas by the river 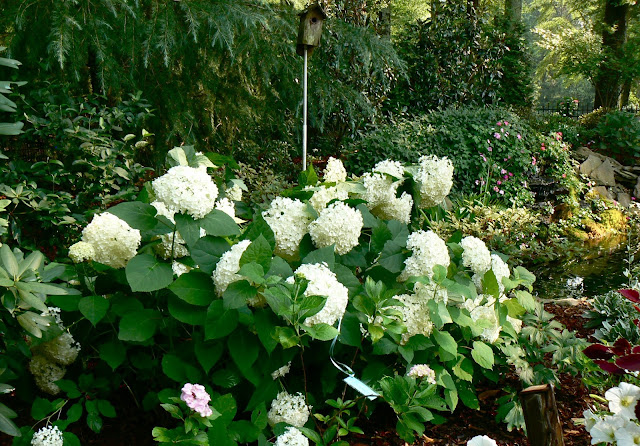 I am still smarting over the fact that I missed the peak of hydrangea season in Atlanta.  So, I'm revisiting some other years and thinking that I won't plan to take any trips next year during the month of June.

This garden was on the American Hydrangea Society's annual tour two years ago.  I confess I don't even know where it was, except it was way out by the Chattahoochee River, north of the city.  I'd been in the area before, but I don't know how I got there nor how I got home.

But that's beside the point.  I remember the owners had included some great features in their landscape in back of the house.  Parts of the garden were intensely planted, as above, with a mixture of textures that blended well with Hydrangea arborescens 'Annabelle'.  In another section, there was a chicken coop, if my memory serves me well.  Close to the scene above was a water garden that had both informal and classical elements.  One of the blue mopheads had enormous blooms and was set among conifers that seemed to thrive in the shade.

On the way out of the garden, you took a long, straight path which was laid out in a checkerboard pattern, with stone pavers alternating with dwarf mondo grass.  The photograph I took could have shown how impressive this feature was, had I only taken the time to move the "Exit" and "Watch Your Step" signs for a moment.  At the end of the long walkway on the side of the house was an arch planted with climbing roses which marked the transition from the back to the front yard.

People have been saying that because of all the rain we've had this spring that the hydrangeas have been better than ever.  Actually, we've had some really good years, although many of the bigleaf hydrangeas (H. macrophylla) took years to recover from the devastating Easter freeze of 2008.  At this very moment, I'm not wishing for any more rain (100% chance for July 4th is the prediction!), but I do wish for another good hydrangea season next year.


Posted by Martha Smith Tate at 1:15 PM No comments: