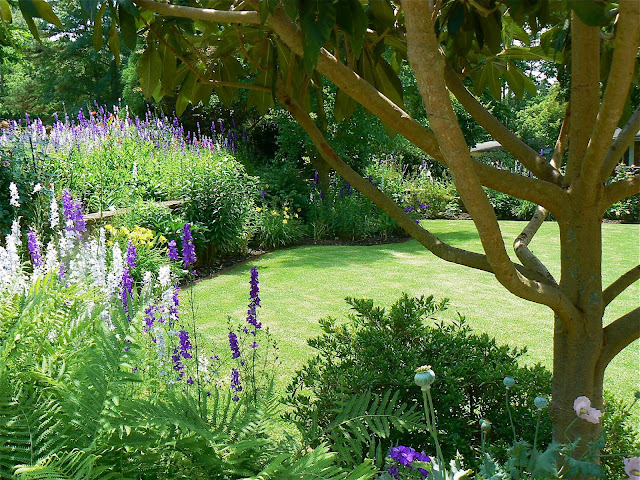 I've missed writing this blog, but I had to go out of town.  I had hoped for a good connection at my friend's house in a remote area, but there wasn't one.

Anyway, I did have a chance to look at photographs and had skipped over this one somehow.  This is a small front yard garden that is a real showcase in spring.  I didn't get over there this year, but I won't let that happen again.  My friend Bob Clinard has beautiful David Austin roses which he maintains impeccably.  They'll bloom well again in the fall, so I'll try to catch them then.

I am always amazed that people can take a small space and do so much with it.  Bob has been gardening all his life, and he has had gardens in odd places.  One that I admired was on a busy street next to an antiques shop.  I wonder how many wrecks occurred while people were looking at his fabulous display of flowers.

But back to this scene.  Larkspur comes up each year in Bob's yard in the strip along the street.  I think he originally obtained the seed from a neighbor who has since passed away.  That same neighbor gave him a start to Shirley poppies and red corn poppies, which are always such a colorful addition to his garden.  I know that people ride up his dead end street and turn around and slow down to see all the flowers.

In this view, I loved the way Bob limbed up the loquat tree so that it almost appears to be a sculpture.  To tell the truth, if you say the word "sculpture garden", my eyes glaze over.  I love seeing pieces of sculpture or ornaments in a garden, and I like to see sculptures displayed in a landscape.  I went to what was billed as a sculpture garden once, and it left me cold.  I think it was more that the sculptures weren't interesting, and the "garden" wasn't really a garden.

It is sometimes hard to get up the nerve to limb up a tree so you can plant under it.  I've seen it done with great success.  I'm not sure if this is why Bob chose to prune the tree as he did, but he certainly created a work of art, whether he meant to or not.