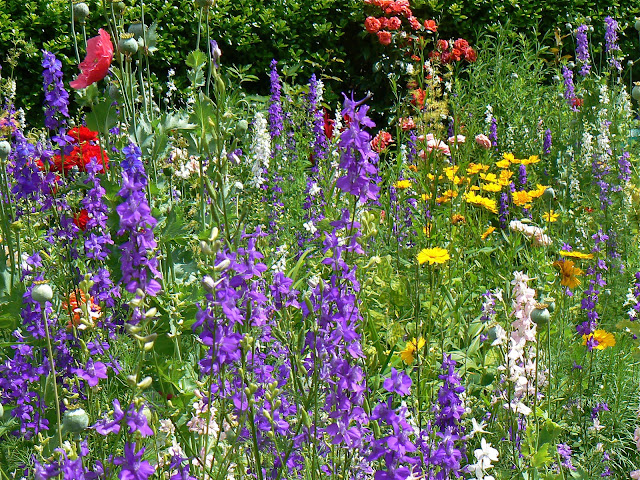 The other day, I was visiting a friend who lives one street over from Diana Mendes' fabulous garden.  Since I had my camera with me, I thought I'd stop and see if she was at home.

She wasn't, but I went crazy.  I'd been there a couple of weeks before and thought I was seeing the peak of her May garden.  But I don't know.  On this day, the larkspur and roses were putting on a show.  She also had a number of other flowers in bloom, including yellow coreopsis and yarrow, and some two tone pink dahlias that echoed the colors of a rose right behind it.  Rising above everything was Salvia uliginosa,  The color is exquisite and reminds you of a summer sky.

At any rate, 78 photographs later, I left.  I had a terrible time choosing one for today.  I love larkspur because it was naturalized all through the vegetable gardens where I grew up.  I loved picking it when I was a little girl.  I've tried to grow it here, but it was always so weak because I lacked sun.  Now that some trees are (expensively) gone, I might be able to get it to grow.  I'll have to remember to get some seed from Diana.  Looks like the blues are dominant, but I saw white, and there appears to be a light pink one over to the right of the photograph.

In the days ahead, I'll post some other views of Diana's garden.  It's so jam-packed with flowers.  I am always baffled by the fact that she can have such a showy garden in spring, and then in the fall, it's full of flowers again.  I still marvel at how she does it.  Amazing.
Posted by Martha Smith Tate at 12:32 PM 1 comment: