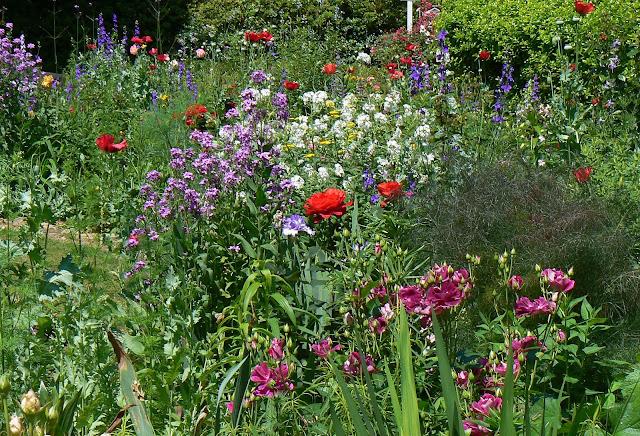 It's a small front yard, really, but what Diana Mendes manages to pack into the space is nothing short of miraculous.

I first went there in October, two years ago, after seeing some pictures she posted on Facebook.  It was hard to imagine that so many colorful fall flowers - asters, chrysanthemums, Mexican sage and roses in their autumn flush of bloom - could be packed into the wide border that surrounds a lovely bit of lawn.

So, Diana promised to contact me the next spring so I could see an entirely different garden.  And, I did.  Her May garden looks like a mini-Giverny.  I was in her neighborhood yesterday and took this photograph around noon in the bright sun.  Diana had particularly mentioned a red rose that was in full bloom, but she said things would look better by the weekend, with more roses open.

That may be true, but I was once again bowled over by the May flowers blooming in such profusion.  The red rose, which I will show later, was indeed spectacular, but so was the entire scene.  And, there were other roses in bloom - all healthy and vigorous.

There was no way to capture everything at once, but I took particular note of some big, round low-growing alliums that I hadn't noticed before.  I wasn't sure if they were A. christophii, so I'll ask Diana.

I plan to visit again this weekend, although I can't imagine how it could get better.  Earlier yesterday, Diana, who drives rescue dogs and cats to foster homes or to other drivers, was taking a dog to be neutered.  I arrived at her garden when she was on another errand, so I missed having her commentary.  There's so much packed into this garden, that it's easy to miss some truly wonderful plants.  I definitely need to go back.


Posted by Martha Smith Tate at 6:55 AM No comments: