The fleur-de-lis - I need an iris allee in Georgia 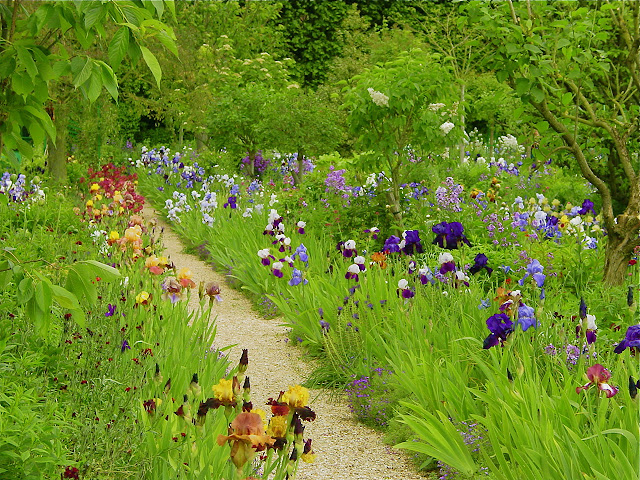 On either side of the front stoop at the house at the farm (it is not a farmhouse, but a house on a farm), the giant bearded iris are beginning to bloom, and they are spectacular.  I don't know which is which, but at least a few of them were given to me by two local gardeners, Carl Lashmit and Vosco Angelov.  So far the colors are pure white and dark purple.  There's one blue and white bi-color;  maybe tomorrow I'll know what the other colors are.

In the garden of my dreams, I'm going to make an iris allee like the one you see above.  I assume that Claude Monet designed this.  There are several such paths at his garden at Giverny.  Since I have scarcely one flat space on this lot in Atlanta, I guess my iris allee is going to have to be on the farm.  Actually, though, if I could get a Bobcat over here again, I could probably figure out a sunny enough area to make a straight gravel path.  It's just that I'd like my area to look like the garden above, and I don't see that happening any time soon.  I can dream, though.

You can see the white lilac in bloom here in France.  Last week, I had a thrill when I went to the farm and saw that a friend who keeps a vegetable garden had planted a purple lilac.  I helped myself.  It's the first time in my life I have gone up to a lilac bush and cut flowers to bring home.  I put them in a tall mint-julep cup shaped silver vase, and they were so beautiful.  I know now how Northerners feel - to have that vase of lilacs was a thrill.

But, back to the irises.  Something just popped into my mind.  I do have a place already that could be turned into an iris path.  If I can scare up the cash to get a retaining wall built this winter, I could do something wonderful using iris up at the cottage.  I'm going to make this my goal.

And, I'm going to study this photograph.  I can't even come close to duplicating any such scene, but I could use this spectacular planting as an inspiration.  I need more flowers in my life, and I'm going to make this a priority this coming year.  I've learned from my 97-year-old friend, Margaret Moseley, that it's never too late to plant.  She's been saying all week that she's going to move a 15 foot tall viburnum (V. plicatum var. tomentosum 'Shasta') that I gave her years ago.  If she has the nerve to do that, I can surely figure out how to do one pathway.  In fact, if I would just get out there and get busy, I could be covered up with all kinds of flowers by this time next year.


Posted by Martha Smith Tate at 2:44 PM No comments: