Jim Scott revisited - over the top! 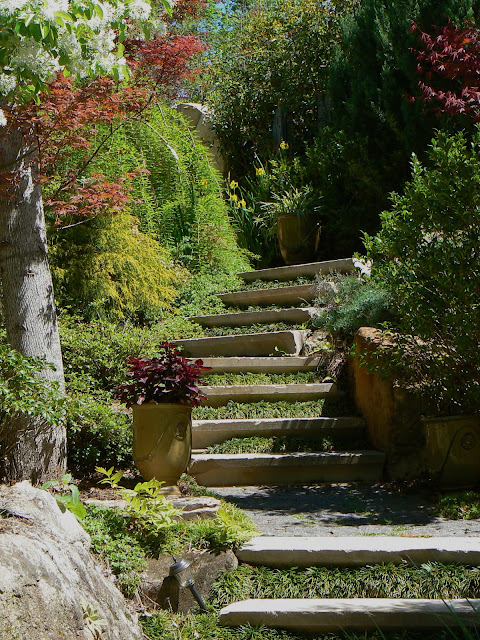 A couple of weeks ago, my friends from LaGrange, Georgia, invited me to visit a garden in Dadeville, Alabama.  They didn't know the owner's name, but said a horticulturist friend of theirs would drive us.

I arrived in LaGrange at 9 a.m., and we drove over to a nursery where their friend Helen works.  Before we piled in her car, I asked about the garden.  Helen said it was the most amazing place I would ever see, and the owner's name was Jim Scott.

I should have known.  If my friends had mentioned Lake Martin, that would have given it away.  And Helen is right.  It is an amazing place.

Years ago, I went to Alabama to scout gardens for HGTV's A Gardener's Diary.  When I drove down a steep dirt road and ended up in a parking area surrounded by electric blue hydrangeas, I had no clue of what was to come.  Jim met me at my car.  He is a fit, lean man who is a bundle of energy and personality.  What he's accomplished on several steep hillsides overlooking a cove in the lake boggles the mind.  I can't think of any garden anywhere that is this ambitious.

First of all, there are literally thousands of rocks and boulders and ballast stones and cut granite pavers and, as pictured above, long pieces of stone carved to make steps, set into the hillsides.  In fact, this is probably one of the biggest assemblages of rocks in the Southeast, and maybe beyond (I'm not counting Rock City or other natural occurring places).  What is fascinating is there wasn't one single stone on the place when Jim started.  Everything has been brought in.  At one point, he bought 85,000 cobblestones, if that gives you any idea.  He says he sold most of them, but I don't know.

Since I was last at Jim's garden (maybe four or five years ago), he has added an entire new section that dwarfs the original garden.  It takes you hours to go down each path (if you can manage to do such a thing - I think there are too many to tackle).  You hate to hurry, because you might miss a choice plant.  This new area, which must cover several acres, contains an astounding collection of trees, shrubs, roses, lilies, vines, perennial flowers, containers overflowing with flowers and foliage and bulbs popping up everywhere.

What was notable on the brilliant sunny day we were there were the Chinese fringe trees (Chionanthus retusus) in full bloom, next to pink-flowering Indian hawthorne trees (which I didn't even know existed; I thought they only came in shrub form).  At one juncture, the pure white frothy blooms of the fringe trees were intertwined with giant white snowballs of Viburnum macrocephalum.

In another new area, Jim had made a rectangular overlook with four stone benches and iron railings, so if you switched seats you could get a different view.  Each of these cantilevered benches was planted with yellow honeysuckle.

Along the paths were surprises, as well.  We saw a giant arisaema from Japan with the most stunning deep maroon Jack-in-the-pulpits unfurling beneath the leaves.

The area pictured above is new.  Up in the left hand corner you can catch a glimpse of the Chinese fringe tree next to the new red foliage of a Japanese maple.  At the very top of the steps to the left of the yellow Iris pseudacorus, is a stone arch that leads you to yet another wonderful area.

Jim has dreamed up the placement of every rock, every plant combination (he had four large weeping Japanese maples flanking walks in the recent addition), every sitting area (even one in a cave; another in a covered platform perched high above the cove with a lookout on top) with great imagination.  Just to walk through this new part (I'm not even going to talk about the huge new pavilion with bedrooms and giant covered porches and a crow's nest way up high) is taxing enough, simply because you are so overwhelmed and are so afraid you'll miss something wonderful.

When I was there years ago, I wondered how he could think this all up.  With the expansive new areas and plants and walkways and boulders and wonderful flowers and shrubs and trees, you marvel at how he's actually translated his ideas in such detail.  Jim has designed all the paths and nooks and crannies and figured out what size rocks to use and exactly where to place an urn and how to engineer all the various levels and an elaborate system of streams and waterfalls.

I don't see how there are enough hours in the day or the night to dream all this up, much less to carry out so many challenging projects.  One wonders, given his high level of energy, if he ever sleeps.
Posted by Martha Smith Tate at 10:10 AM No comments: