The thrill of the wild Easter lilies 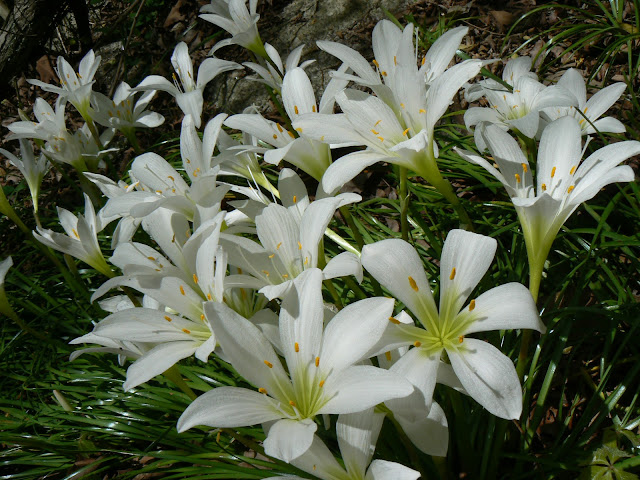 Last Saturday was a beautiful day here in Georgia, and my friend Richard cranked up one of his vintage military jeeps, and we headed across the farm to our usual stops.

First, we checked a place along a former runway where there's a piece of plywood and an old table turned upside down.  Richard loves snakes, and we always go there first to check if there's a new resident. Last week, he found a three foot long female king snake.  On Saturday, he lifted the board, and a little lizard-like creature scurried away.  Then, he turned the table over.  Nothing.  I don't mind snakes, but I secretly breathed a sigh of relief.  It just didn't seem like a good day to be relocating the creatures (he takes them over to his building and lets them go).

Our next stop was a patch of bloodroot that I had found the week before.  The flowers had gone, but the leaves were there.  Next year, I'll remember to look earlier for the flowers.

We then crossed the shoals, and stopped the jeep and walked down the wide, flat rocks to where I discovered a native azalea (Rhododendron canescens) last year.  There were some thick buds, but no flowers yet.  I was dismayed to see that a huge bush had died.  It looked old and gnarled.  But then, as I glanced around, I saw plenty of new azaleas that should be flowering in the future.

After that, we headed for the crossvine.  Last year, it had blooms on April 2.  I couldn't see any flower buds yet.  It should bloom around the end of April, so we'll have to go back to see.

And finally, the prize.  Richard spied them before I did.  My heart leapt at seeing them glittering white in the sun - wild Easter lilies.  Two years ago when we were exploring, I found some foliage which I knew must belong to a bulb of some kind.  But it was later in the spring, so whatever it was had already flowered.

Last year, when we went back there, I was ecstatic to find several patches of atamasco lilies (Zephyranthes atamasco), a type of rain lily. Just last week, I had been there to find only two flowers, and I didn't see any buds.

But, they had sprung up en masse in a week's time - dozens of them in several areas around a granite outcropping.  The buds are pink, but open pure white.  The flowers are about 10 inches tall.

I wonder how long they've been there.  The week before, I had been weeding Mother's poppy bed when I found a pottery shard.  Richard and I had found a lot of pottery pieces and some arrowheads in another spot.  But the flower bed is probably 3/4 mile away from our original find.

Could those lilies have been there when the people who made the pottery lived on the land?  My parents bought the farm in 1957, and it had been in my friend Karen Villano's family for over a hundred years before that.  Did her ancestors know about the flowers?

I have long felt a connection to this beautiful land.  From the time I was 12 years old, I drove Daddy's jeep all over the 151 acres.  I saw it differently then, and I never thought about the fact that others had also been a part of this special place, with its streams and rolling pastures and deep woods.

So, when I stood there on Saturday and looked down at those pure white flowers, I felt a sort of reverence just knowing there are so many treasures left there by nature and by people who were a part of the land long before my time.
Posted by Martha Smith Tate at 1:31 PM No comments: