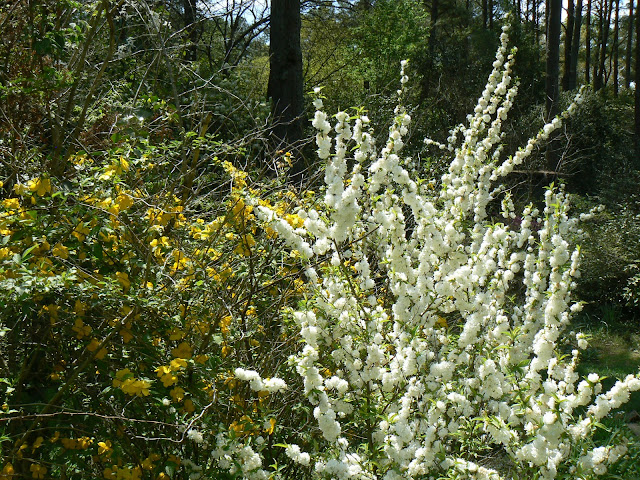 During the 21 years I wrote a column for the Atlanta Journal & Constitution, I was always delighted when I was able to answer a question for a reader.  One in particular came in a letter that took forever to reach me (typical in the days of snail mail).  A woman who lived in rural north Georgia wanted to know about a plant she remembered from her mother's garden.

As I read her description, I felt really good about the answer.  It was a shrub, she thought, that threw up spikes of light pink, fluffy flowers, usually in March.  She had never seen the plant offered in any nurseries, and she hadn't seen it anywhere for decades.

I remember driving along a road in Marietta one spring years and years ago, when something caught my eye.  I couldn't stop because it was a busy road.  I saw spikes of pink flowers that went all the way up the stem.  I was convinced that I was seeing a perennial flower, a herbaceous one, rather than a woody shrub.  I drove on down the road and turned around, hoping to get a better view.  I didn't.  A car was bearing down on me, so I had to be content with another short glimpse.

I guess it was the next spring I was over in Athens, Georgia, scouting gardens for A Gardener's Diary on HGTV.  I had been sent to what the author of a book about old Southern gardens called a "vernacular" garden.  The owner had filled the small plot of land around her house by the railroad tracks with all sorts of flowers.  The first thing I saw was the plant with the pink, fluffy spikes.  Her mother had passed it down to her, she explained, and she had kept it going for decades.  It turned out to be flowering almond.  The gardener sent me home with a start, and every year, I've enjoyed seeing the pink flowers appear in March.  Last year, I moved it up to the little house, and it bloomed well this spring.

The above plant is the white version of flowering almond.  It flowers just after the pink form.  I did have the white almond at one point, but it was in the way of a new water line, and I think its roots were destroyed.  It was a passalong plant from the one you see above, planted 40 years ago by Margaret Moseley.

Back to the letter about the identity of the plant.  I was so pleased that I was able to call the woman and identify the plant for her.  I offered her a start, but she said she was about to move into a retirement home.  She had simply wanted to know what the plant was that she remembered from her childhood, a plant her mother had loved and said was a sign that spring had finally arrived.
Posted by Martha Smith Tate at 10:33 AM 1 comment: