Hoping for the return of a long lost iris 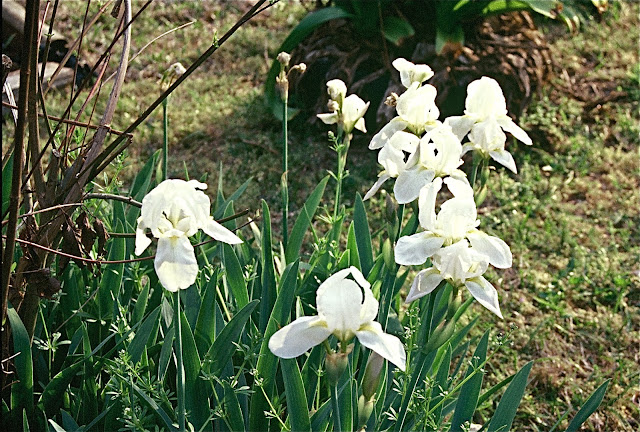 Week before last, I went over to my daughter's house to wait for a repairman to come.  While I was there, I took her dog for a walk around the block.  As we were passing by a house, I saw some white flag iris, those early ones that look like butterflies.  All of a sudden it dawned on me that I used to have them up at the little house.  But, they're not there anymore.  When and how did they disappear?

That's the thing about gardens.  Some things are there for a long, long time.  Others bloom for a couple of years, and then they don't show up the next.  Still other flowers are like a long, lost love.  You think you'll never see them again; in fact, you've all but forgotten about them, and out of the blue they show up when you least expect it (this is some wishful thinking!).

I can't even remember how I got those iris.  They must have come with some flowers that were given to me, a bonus, in other words.  They are the first iris to bloom.  I distinctly recall seeing a row of them next to the house of the late Lewis Shortt, who was a wonderful collector and gardener, especially of Georgia native plants.  His white flags were the prettiest I'd ever seen, and I meant to go back and get a start of them.

The ones I had (above) were, pretty, too, but did not glow like Lewis's.   If I analyze what must have happened, I realize they've been gone for quite a while.  A water line was put in where they were, and the site became part of the parking area.  I failed to save what was there, so the iris probably fell victim to a Bobcat.

But, who knows?  One day they might show up again, and I'll be delighted to see them.  These are passalong plants for the most part.  You'll see them blooming next to abandoned homesteads out in the country.  In those places, they've not been disturbed for decades.

I've had flowers come back after a long absence, most notably some sweet rocket and a verbascum that I was fond of.  But, I can find some white flags, and I won't have to wait for them to reappear on their own - unlike the long lost love who only existed in my imagination.


Posted by Martha Smith Tate at 1:48 PM No comments: