How things can change 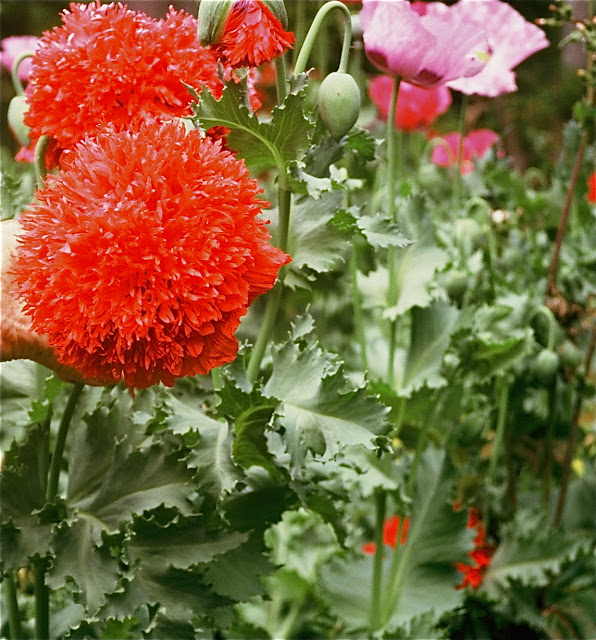 First of all, I need to say where I've been lately.  The answer is actually nowhere.  My brother in Louisiana e-mailed me when he didn't see a new post for several days.  Somehow, life sort of got in the way of work, so I have some catching up to do.

I'm including this picture because I have poppies coming up in the gravel around my front stoop.  There was one single pink poppy there last year, and I can't imagine where the seed came from.  There are lots coming up at Mother's house at the farm.  These are left from her very double, cherry red poppies from decades ago.  The one you see in the picture here reminds me of Mother's, although her original ones were a different color.

I took this photograph in Margaret Moseley's poppy patch.  She started long ago with one plant from an aunt.  Poppies are hard to transplant, and she didn't think hers would live, but it did.  After several seasons, the one poppy plant (which had a single pink flower) morphed into a riot of different colors and various shapes.  Some had zillions of petals, and some just a single row.

Last year, I noticed that Mother's poppies had also produced some new colors.  I marked one plant which had blooms that were almost purple and segregated the seeds.  I'll see how they look this year, but I don't think there's any guarantee that I'll ever see that color again.  I did see, however, several mail order sources for some very intriguing colors, like very dark maroon-purple and also a cream one.  In the South, we have to plant poppy seeds in the fall.  I'm tempted to order some of these beauties and put the seeds in the freezer until October or November.

My mother used to be very secretive about these poppies.  Old timers called them opium poppies.  When you see them for sale, they are referred to as peony poppies.  I think the species is still Papaver somniferum, which tells you something.

I guess if you wait long enough and provide bare ground for the seeds to germinate, you'll begin seeing all kinds of colors and flower forms - all part of the fun of having a garden.  I can't wait to see what the rogue ones next to my front door (not a good place for tall flowers) look like.  I will let you know when they bloom in May.


Posted by Martha Smith Tate at 8:31 AM No comments: