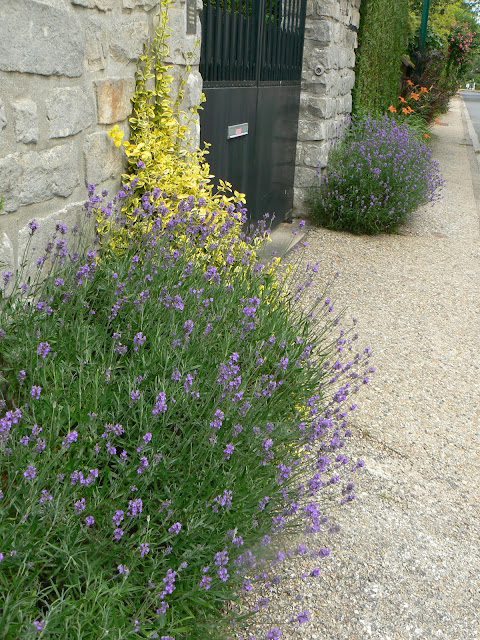 Two friends who are traveling to Paris for the first time - one in April, one in May - have asked for recommendations for side trips.  I'm hardly the person to ask.  Most of my knowledge of France comes from living in Paris 40 plus years ago.  However, I have gone back three times in the past several years, and I did take some day-long excursions.  There is one place, though, that I will not recommend.

The town sounded so interesting - Barbizon - at the edge of the forest of Fontainebleau, "like stepping into an Impressionist painting," one Web site said.  Home of a famous school of 19th Century painters, namely Millet and Rousseau.  A picturesque, but out-of-the-way excursion from Paris.  I couldn't wait for the chance to photograph its wonderful hidden gardens.

"Hidden" is the key word here.  The above photograph is the only thing I saw that hinted of flowers.  But first the trip to get there.

Little did I know, but we were doomed from the start.  My friend and I went to the train station a day early to get our tickets.  I bought two round trip tickets and slipped them into my wallet.  Therein lay my first mistake.  The tickets look exactly like Metro tickets.

Not paying attention, I unknowingly used up the expensive round-trip tickets to Barbizon to get around Paris for the day.

When we arrived the next morning, and there were no train tickets, I realized what had happened.  We had to purchase new tickets.  This cost us time, and we barely made it down to the tracks.

It didn't matter anyway, because the train didn't come.  We waited and waited; no one knew anything.  Trains came for other destinations, but none for Melun.  Finally, an announcement.  Someone had committed suicide on the train tracks of our route, and all traffic had been halted.  It was not known at what time they would be reopened.

I can't remember how long we waited, possibly another couple of hours, when finally a train appeared, but on another track.  We almost missed it.  At last, we were riding toward the countryside, and all seemed well.

We made a few stops at small stations.  When we were getting close, I thought I understood the announcer to say "Melun".  I panicked and made us get off the train at the last moment.  We jumped down, and I realized this was not Melun, but a tiny blip of a station.  In fact, there was not even a depot.  The train was already moving, and we ran to try to get aboard. Too late.

Not a soul was around.  Also, there was construction, and we couldn't even get down from the platform onto the only road.  At last, a young worker came along.  I asked him about Melun.  It was the next stop, he said, but there wouldn't be a train for at least another two hours.

I'll hurry this up.  A train came within 15 minutes, and we climbed aboard and got off at Melun, which had a large station.  But, the promised bus to Barbizon did not exist.  We had to take a taxi.  I won't even say how much that cost.  The driver acted like he had never had a request to go so far.

Once in Barbizon, we found a charming village shut tight.  The Bureau de Tourisme was closed for the day. We went into the one open restaurant. After the only waitress ignored us for at least a half-hour, we got up again.  We finally found a bar with no patrons.  Two young men said they would fix us something to eat.  It took them an hour.

I recommended we walk down to the Foret de Fontainebleau at the edge of town.  It had rained recently, so we had to dodge puddles on the path.  We came to some rocks and sat down for a moment, only to be attacked by swarms of mosquitoes.  So much for the forest.

Back in town, I desperately peeked through cracks in walls to see lovely enclosed gardens.  "Open on Friday-Sunday," the signs all said.

We were pretty much stuck in Barbizon.  The only sign of life was an old man who had set out some horrific looking canvases that depicted distorted gleaners bending over picking up hay.

We asked a butcher about the bus back to Melun.  "Only on the weekends," he told us.  I asked if he could call us a taxi, and he did.  We were picked up in front of the man selling the "Copies de Millet".

There you have it.  An expensive side trip on the wrong day.  You are seeing the only flowers in town - a stand of lavender and a few orange day lilies.  Or, so I thought.  On the taxi ride out, we took back streets in a part of the village we hadn't explored.  I caught a glimpse of two flower-filled gardens.  And, I saw lovely plantings along a cobbled passageway.  A missed opportunity.  It was the appropriate ending for the ill-fated day.


Posted by Martha Smith Tate at 8:42 AM No comments: