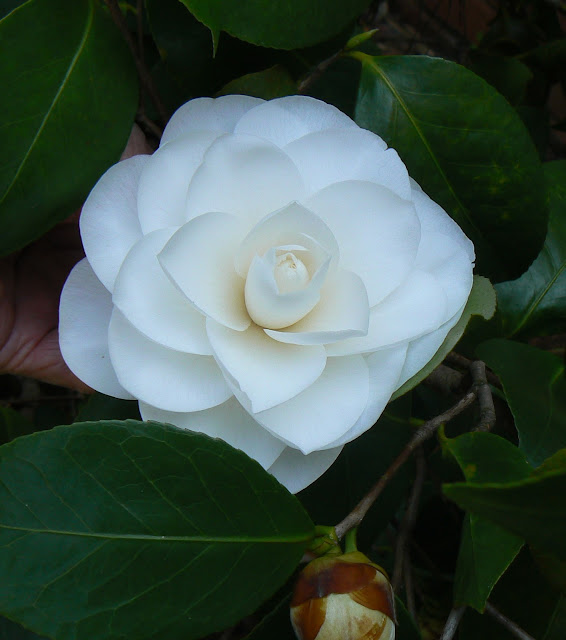 Well, it wasn't this one, which is Camellia japonica 'White-By-the-Gate'.  All week, I've been involved in the Southeastern Flower Show, and everything, including this blog, went by the wayside.

This was my 24th year working at the show.  I am not a leader or anything, but I greatly admire all those who've been there for the 25 years and dedicated months of their lives to making it happen.   The show is much smaller now, and I can't help but think of the glory days when there were huge, elaborate gardens and so many flower arrangements, one could never see them all.

But, it's different now.  The recession didn't help.  And people like me are 25 years older!

Usually, the show is held in February, for most years about the third week.  One year, it was too early, and there were hardly any horticulture entries, because nothing was quite in bloom yet, and what was had been frozen by a devastating cold spell.  There were a few paltry camellias.

This year, though, the camellias were the stars.  I took a lot of pictures of the specimens.  They were the best I can remember.  Some that grabbed blue ribbons were 'Magnoliaeflora', 'La Peppermint','Carter's Sunburst', 'Yours Truly',  'R. L. Wheeler', 'Beauty of Holland', 'Grand Slam', 'Black Magic', 'Governor Mouton', 'Dr. Tinsley', 'Show Time' and 'Royal Velvet' (this last was a huge deep maroon flower with golden stamens - knockout).

The theme of this year's show was "What's Old is New Again".  By far, the very old (1875, Japan to U.S.) 'Pink Perfection', a small flower that suits its name, was the biggest winner.  I've wanted this shrub for a long time and haven't been able to find it in a nursery.  There are certainly a lot of the plants around Atlanta, judging from the number of specimens entered.

So, fortuitously enough, yesterday I had to go to Monroe, Ga., to fetch my car (a long story; my daughter's car conked out, so she came and got mine, and ended up with two cars at her work there).My friend Benjie drove me out there, and I kept looking for a nursery someone told me about.  We were about out of the town where it was supposed to be when we stopped for gas.  I asked a young girl inside the convenience store, and she said, sure, it was right behind the station.

So, what are the odds?  Forty miles worth of shopping centers, car dealers, gas stations, and we picked the right one.  We drove back there, and saw a big selection of camellias.  There it was - 'Pink Perfection.'  We drove on to get my car and came back.  I panicked for a moment, thinking someone had bought them all (I was in the wrong place).

So, now I am the owner of this old and beloved flower.  I also bought 'Greensboro Red', two sasanquas ('Cotton Candy') and three 'Prince Eugene Napoleon' (red), the latter dating from 1859 from Belgium.

Last week, I had bought 'Sea Foam', which looks very much like 'White-By-the-Gate' pictured above.  The big buds are opening into large white double blooms.

I have my work cut out for me, but I am a happy camper.  I'll have to do a lot of digging, followed by a lot of watering.  Now, if the deer will not ruin my happiness.  They decimated my 'Taylor's Perfection', but I'm getting a motion light installed on the side of the house where the camellias are going.  Maybe that will work, at least for a while.  Wish me luck!
Posted by Martha Smith Tate at 3:21 PM 3 comments: