Not this year - at least not yet 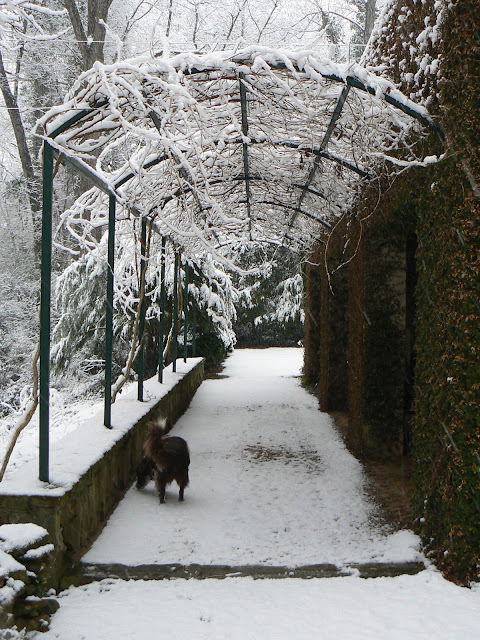 I don't remember the exact year - sometime in the 1990's - when we had a blizzard on March 13th.  It's the only blizzard I can remember in my lifetime in Georgia.  The wind howled, the snow fell sideways, and all the spring flowers that had come up were buried beneath the snow.  The power was out, and I took soup my mother had canned down to a neighbor's house where she had a gas stove.

When all was said and done, pretty much all the major daffodils were broken to pieces.  The forsythia turned mushy, and the early viburnums were pretty much destroyed.  It didn't help that the thermometer dropped to 12 degrees the next day.  Not one of our better springs.

This year, I don't think there's been a flake of snow to fall.  Not that it's all that unusual here in Atlanta not to have snow, but in the past, we've averaged a couple of snowfalls a year.  Snowfalls may be an exaggeration.  More like a dusting.

But the snow that fell in this photograph made quite a scene.  It was the good kind where you could make a snowman and walk without falling down on ice.  I took several photographs of my woods and the lane leading up to the little house - all very picturesque.

I like this shot because it shows a structure in back of my house.  I had this installed in the late 1980's.  In fact, it had just been put in when the famous English gardener Christopher Lloyd came to dinner at my house.  At that point, the iron was still the original rust color (later painted dark green).

I had copied the idea from a restaurant in the Perigord region of France.  A man came and took measurements.  Then, when he returned, he had a truckload of iron pieces that didn't look right.  I nearly fainted.  What was I to do, as I had signed off on the measurements.

I'm happy to say that when it all got installed, it looked even better and was sturdier than the picture from France.

The first vine I planted was a double-flowering wisteria.  It was a disaster.  It was not only a monster, but the flowers came on after the foliage, and you couldn't see them tangled in the vines.  I threw in some Clematis montana rubens, which was fine, except you had to stand on the terrace and look down to see the pink flowers.

Even though I'd paid a fortune for four special wisterias, I had to cut them down.  Every summer, I would lean over and try to lop off the crazy shoots that reached high into the air. You couldn't even tell it was supposed to be a tunnel.  It looked like a bad hairdo gone wild.

I agonized over what to do.  'New Dawn' roses?  Speaking of rampant, and how to deal with the lethal thorns?  Lady Banks rose?  Too uncontrollable.

Finally, I was walking down a street in the West Village in New York and saw the vine I wanted - a yellow Campsis radicans (trumpet vine).  So, that's what I have now, and even though I'm not diligent about keeping it clipped, the vine behaves a lot better than wisteria.  At least it lies pretty flat along the top of the arbor, so that you can see the proper outline.

All this to say that we didn't have any snow this year.  It can still happen, though.  In fact, they're saying flurries in the next couple of days.  One of the deepest (four inches!) snows I remember in my adult life fell on April 4th.  I hope that doesn't happen this year.  Azaleas and snow do not mix.
Posted by Martha Smith Tate at 3:19 PM No comments: