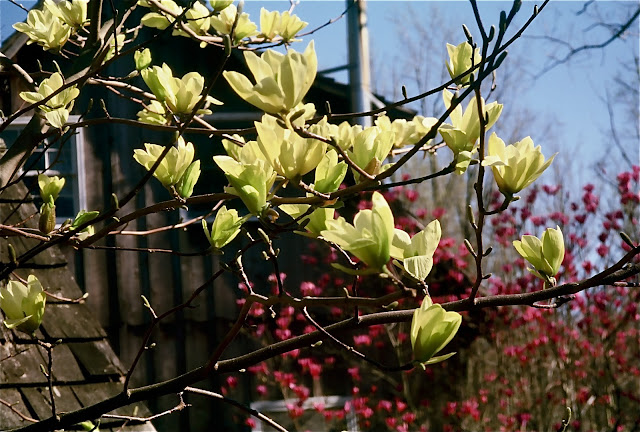 A couple I knew - she was Japanese; he was American - had a wonderful garden where, on his side, he grew Asian plants and installed Japanese lanterns and bamboo fences.  In her area, she created an English garden look, exactly backwards of expectations.  Everything that was written about them - and I was guilty of this -  almost always included the words "East Meets West" in the title.  It got to be a joke, because it became such a cliche.

Looking at the yellow deciduous magnolia above, though, I was reminded of East meets West.  This is Magnolia 'Butterflies', a cross between the cucumber magnolia, M. acuminata from the Appalachian area of the U.S., and M. denudata from central China.  I fell in love with this small tree the moment I saw it in bloom.  In more northern climates, the flowers are a deeper yellow, but here in Georgia, you get the same lemon color as seen in this garden in Maryland.

I'm adding this tree to my list of "Things I Should Have Planted When I First Knew About Them."  It likes moist, well-drained soil in full sun.  I now have such a situation (but do the deer eat these?), so I'll be on the lookout for 'Butterflies.'

This is a slide that was converted to digital.  I had thought the pink in the background was a redbud, but it must be another deciduous magnolia.  The flowers don't appear along the stem as is typical of redbuds.  I guess I'd forgotten, but whatever the tree is, it's a nice backdrop for Magnolia 'Butterflies.'
Posted by Martha Smith Tate at 1:46 PM No comments: