From Japan to Italy to Decatur, Georgia 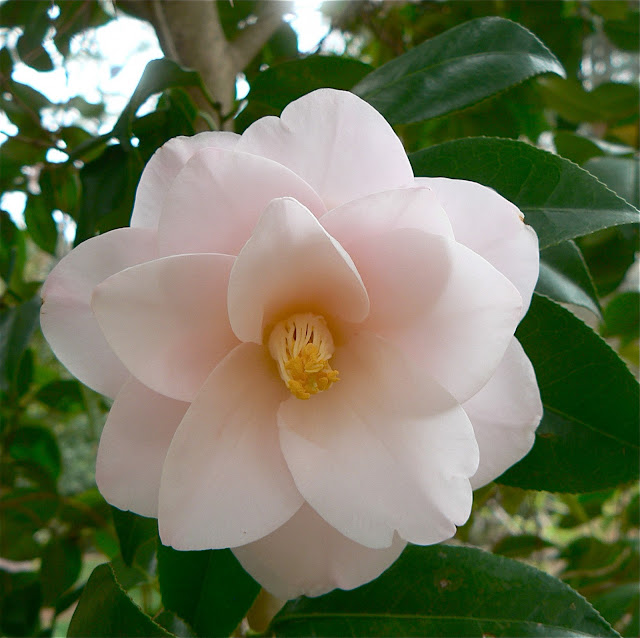 The provenance of plants - where they were found originally - and how they came to be in a garden on the other side of the world has always fascinated me.  I've read several books about plant explorers and marvel at what they went through to bring back flowers to their countries.

For example, the British explorer E. H. Wilson took a photograph of a headhunter in Taiwan.  The man is standing there, holding some unfortunate person's head by the hair.  Whether Wilson himself was ever in danger from losing his own head, I don't know.  He did get caught in an avalanche of boulders, and his leg was crushed, causing him to walk with a limp the rest of his life.  He is best known for his discovery of the regal lily (Lilium regale), although he was responsible for bringing back seeds of many other familiar plants.

The above flower, Camellia japonica 'Magnoliaeflora' (also known as 'Hagoromo', 'Rose of Dawn' and 'Cho-No-Hagasane) is pictured in Margaret Moseley's garden in Decatur  (she has a Decatur address, but her house is not near downtown).  The Camellia Nomenclature book I have says 'Magnoliaeflora' came from Japan via Italy in 1886.   It just fascinates me that this very old-fashioned and popular variety ended up in so many gardens in the United States.  You wonder who first brought it to Italy, and then how it was passed on, possibly to England and France or maybe directly to the United States.  With all the thousands of camellias introduced since, it surely remains one of the most beautiful and desirable camellias to grow in our climate.

I know Margaret recommends it highly, so if you're out and about and see it for sale, it's a great evergreen addition to the garden and one of the most exquisite flowers in existence.