One year later: "You ought to be out here today." 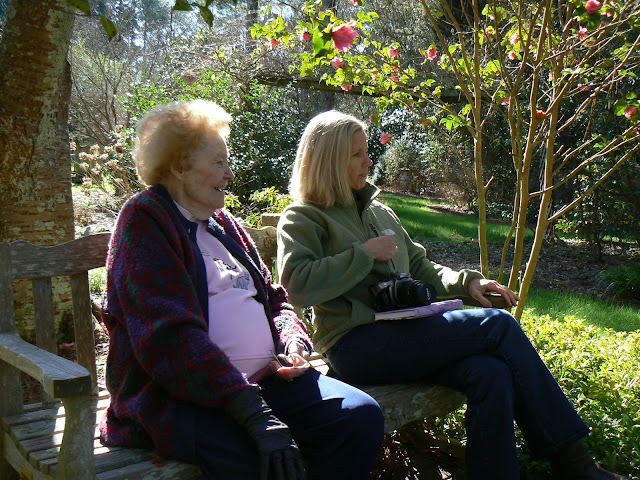 The light is not as beautiful today as it was one year ago on January 28, 2012.  Erica Glasener, host of A Gardener's Diary on Home & Garden Television, Kathryn MacDougald, my fellow executive producer for the show, and I went to visit Margaret Moseley.  We all wanted to witness a rare and beautiful plant in bloom.  If you look back to my post on February 6, 2012, you'll see Michelia maudiae in Margaret's garden.  We all snapped multiple photographs of this magnolia-like tree that produces branches of creamy, very fragrant blooms.  It's a sight to behold.

But that's not all there was to see.  My photo take from that day includes several different camellias, namely Margaret's favorite 'Fragrant Pink', my favorite, a solid red form of 'Governor Mouton' and the exquisite blush pink 'Magnoliaeflora'.  Hellborus hybridus in both white and dark, dusky burgundy, and the variegated form of Daphne odora with pure white, deliciously fragrant flowers were also in bloom.

Margaret called me this morning and left a message, one I've received over and over in the decades I've known her:  "You ought to be out here today.  This garden is just beautiful."

If only I'd gotten an early start, but it seemed so cloudy and gloomy earlier.  After checking the date on my photographs, I saw that this was the very day - January 28  - that we were there.   It was unusual for the michelia to be in bloom this early.  Normally, it flowers in late February or March.  I even have the later dates listed in the aforementioned February 6, 2012, post.  Amazingly, the michelia is once again in full bloom on January 28th.

But that day one year ago is one that will live in infamy.  After Erica (pictured above with Margaret), Kathryn and I left, Margaret discovered that she had broken her coccyx bone, which set off a series of health events that have plagued her this past year.

I'm happy to report, though, that Margaret is in great spirits and is on the mend (she suffered a break in her lower spine about a month ago).  She's not allowed out the garden just now, but from her window she can see many of the beautiful flowers she's planted.  You can hear it in her voice, even though she has to be content with a view from her window, that the garden continues to bring her pure joy.