You should have been here last week - late autumn 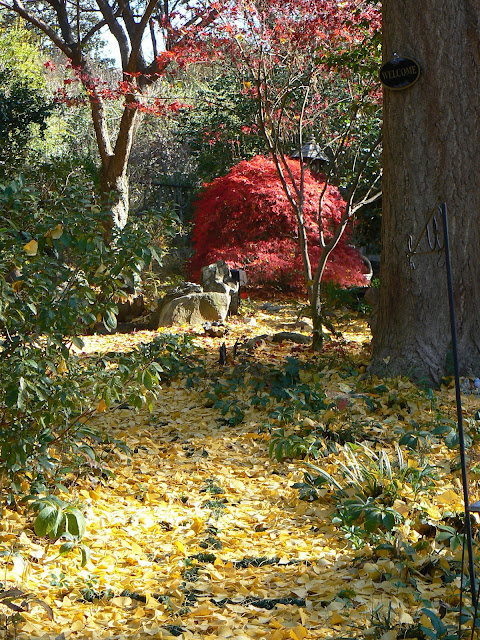 So often when we'd go to tape an episode of A Gardener's Diary, we'd hear the regretful words:  "You should have been here last week."

It's something we had to learn to live with.  Yes, the garden looked much better a week ago, but here we were with a five person crew, a three hour flight from home.  Somehow, we could always find something of interest to make a good show, even if practically every shot was a close-up of the two flowers that remained on a shrub.

Making garden shows was tricky.  We'd try to schedule a shoot to coincide with when the most flowers were in bloom.  This was especially critical if someone specialized in just one particular plant, like roses, for instance.  Once we canceled a shoot altogether for a garden in the Napa Valley in California.  The people called about two weeks in advance to say that their antique roses were peaking at that very moment, and by the time we arrived, there would not be a single petal left.  There was no sense in pursuing that garden, as the roses were one-time bloomers, and the warmer than usual weather had thrown the peak season off considerably.  The other garden in the region, though, had a lot of different flowers and other leafy plants of interest, so that worked.  We had a back-up, and it turned out to be an interesting show, as well.

It looks like I missed the peak in Margaret Moseley's garden pictured above.  When I arrived that day, the Monday after Thanksgiving, all the leaves had fallen from her ginkgo tree.  She had been reporting every day on the progress of the leaves, describing how it was to stand under the tree, "like being in the brightest sunshine, even though it was a cloudy day."

But, I had actually planned to come when the leaves were on the ground.  Usually, my fall pictures of Margaret's garden look like spring, because she has so many Camellia sasanquas.  But on this day, you knew which season it was.  I couldn't get over how satisfying it was to walk through the silky leaves. You'd pick one up, and it would be a perfect golden fan.   There were leaves everywhere.  One of my favorite photos is of a ginkgo leaf-filled bird bath.  Another, which I posted late last year, was of a mass of bright leaves surrounding a blue and white ceramic pot.  I had never noticed that piece in her garden before, but the composition lent a very oriental feel to the scene.

An update on Margaret's condition is coming tomorrow.  She may not be able to go out into the garden anytime soon, but I'll show you the view from her sun porch.  It feels as if you are right there in the midst of the beauty.