Would love to have these exact seeds 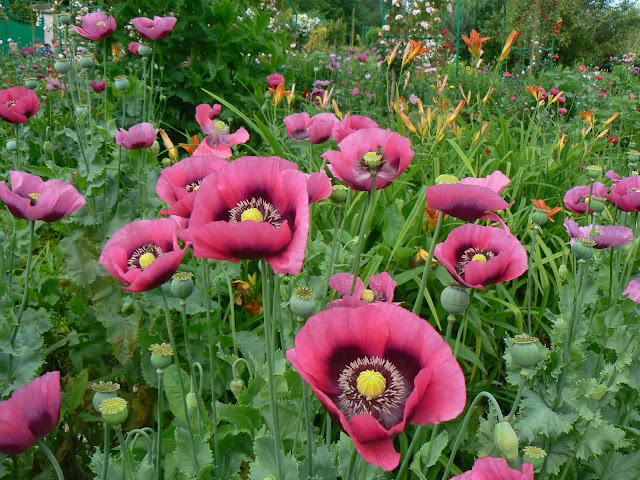 There's still time left to plant poppy seeds in Georgia.  As much as I love all the cherry-red poppies and other colors that have morphed from my mother's original shaggy flowers, I would love to have some seeds of this exact poppy.

I took this photograph in Monet's garden at Giverny.   The colors were so unusual and intense.  I'd never seen any poppies quite like them.  There were other poppies in the garden, but this particular patch stood out.

A friend is sending original poppy and larkspur seeds from Margaret Moseley's garden.  Margaret's daughter Carol had the site plowed so that the bed can be re-established.  I'm excited to see what will come up.  I'm betting there were seeds that have been lying there for the past few years, just waiting for some sun and clear ground to germinate.  That happened when I cleaned out my mother's garden alongside her house.  As soon as the earth was bare again, the poppies sprang up.  It was so exciting to see them again.  Mother had not been able to garden for a few years, and the grass and weeds had taken over her once-prized poppy bed.

Last fall, the man who keeps vegetable gardens at the farm, planted seeds from Mother's poppies.  There was this incredible wide row - at least 75 feet long - of mostly bright red flowers.  I'm hoping he'll do this again.  I'm sure if the ground is cleared, the flowers will pop up again.  About a week after everything had bloomed out, and the seed pods had formed, the whole row turned into a mass of yellow, with goldfinches having a field day in the sun.