The holly orchard was a good idea 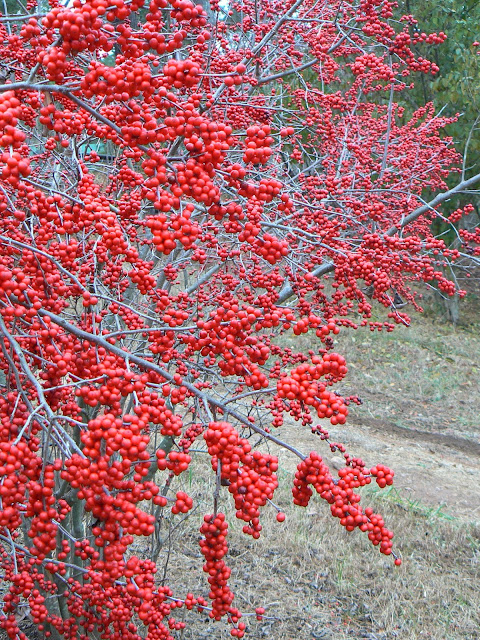 I could just imagine my friends' faces when I walked in with their gift - a big bucket of deciduous holly - the kind you see in many upscale decorations, like in hotel lobbies and department store windows.

Also, I would save money for the church.  Instead of buying branches of these prized (and expensive) berries, I would walk in with armloads to use in our giant arrangements on the altar.

Evergreen holly is beautiful and will forever be a symbol of Christmas for me.  I have two large Chinese holly trees here on the property.  Most years they have a heavy berry load.  This year is no exception.  The only drawback is that the leaves are so sharp, I never fail to get pricked to the point of drawing blood and an occasional infection.  Still, I've cut branches or twigs to use at Christmas almost every year for the 40 years I've been here.

I also have two other types of holly.  A very loose Burfordi holly that does not get enough sun to form a thick shrub like the ones at the farm.  But these have good, loose branches and lots of berries, so they can be used in church arrangements for something to give a curved line at the bottom of the composition.

There's one more evergreen holly here that is much more refined than the regular Burfordi.  I thought it was the dwarf form, but it has prettier leaves and more nicely formed clusters of berries than the common Burfordi.

But, what I really want is a deciduous holly orchard, like the one at Elizabeth Dean's nursery, Wilkerson Mill Gardens (pictured here).  I stopped by one day just as she had cut scads of branches to take to a market.  I almost died of envy.  She also had cut some wonderful evergreens to sell - different chamaecyparis, some 'Little Gem' magnolia and variegated false holly.  Her truck looked like my idea of magicland.

So, two winters ago, I bought six 'Winter Red' deciduous hollies at an end-of-the-season sale.  I also bought two golden deciduous hollies.  So, I had eight females, but the nursery only had one male left.  At that point, I should have conducted an all-out search for another gentleman.

I planted the hollies in three rows, with the single male in the middle of the middle row.  Despite a lack of good rain, the stick-like shrubs survived.  I kept going and scratching places to make sure there was green inside.

Then, that next spring, I didn't see my hollies.  I had planted them inside a fenced-in garden that someone had made on the farm.  After walking for a bit, I found them.  They had been moved to form a long row along the fence line. This was done, I'm sure, because I had planted the trees in a way that would disrupt several rows of crops.  I didn't know which was the male.  He could have been anywhere in the row.

Last year, some little green berries formed in the spring, but not on all the plants.  By late summer, they had all dropped off.

This fall, right before Thanksgiving, I went down to my row.  I counted six skinny bushes.  Five of them had red berries, but the gold ones were no where to be seen.  I knew what had happened.  Some beans had grown up onto the plants, and the gold ones must have inadvertently gotten cut down.  The shrubs are not much to look at during the spring and summer.  They could have been mistaken for scrub trees.

I could tell that I would have at least a few short, berry-laden branches for some small arrangements, like in a julep cup.  I wasn't ready to surprise friends or impress my Flower Guild team at church, but I was nevertheless thrilled at my limited prospects.

Then, we had a hard freeze a day or two before Thanksgiving.  That should not have been a problem.  I've seen 'Winter Gem' bushes grown into small trees and still bearing red berries in late winter.  But, after that freeze, I did not have a single berry.

Did the birds get them?  Or, had the plants been too close to the fence so that the deer could reach through?

I'll never know.  I do know where the lone male is - he had no berries, and he was in the middle of the long row.

So, I need to consult with the man who tends the garden.  I want to buy some more plants and extract a promise from him that they won't get moved this time.  And, I need another male or two', in addition to some more females.  This time, I'll mark all the trees with surveyor's tape and make sure the males are well-placed.  The gardener says he will fertilize the plants in the spring.

I've already calculated how old I will be when my trees look like Elizabeth Dean's.  But that's okay.  If I live, I'm sure I'll still delight in having holly branches to give away.  I don't think I'll ever be too old to love beautiful, natural decorations at Christmas time.