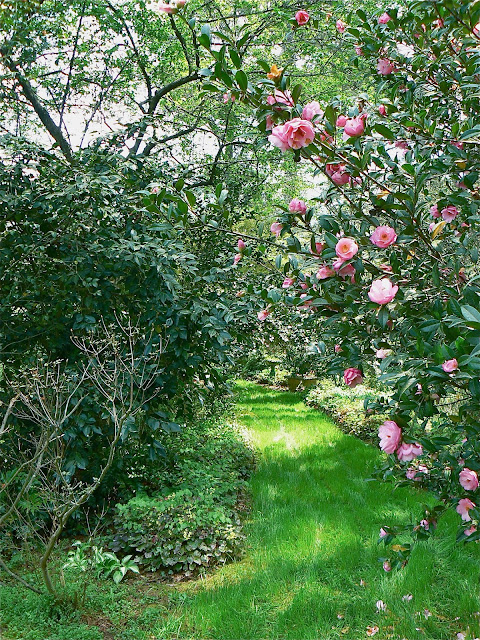 The life of a garden columnist in winter was pretty bleak.  When I started off at the Atlanta Journal-Constitution in 1988, I did profiles of gardeners.  It was a weekly column, so it was akin to having a term paper due every Monday.

It was also back in the dark days before e-mails, but in the era of FAX.  I would come up with my story and fax it down to an editor.  An assistant would type it into their system.  I could go over my copy umpteen times and be so positive that everything was correct, but more often than not, there would be a mistake when it was re-typed.  Some weeks I would open the paper and burn with shame over a typo or a quote mark that was wrong.

But, as cumbersome as the process was then (I also had to assign a photographer, and I almost never agreed with the pictures they took), the hardest part was finding someone to let you in their garden during the winter months.  I ended up with way too many greenhouse stories that weren't all that riveting.

And then in 1994, I was introduced to Margaret Moseley.  She had begun gardening when she was 52, meaning that if she was born in 1916, that made it around 1968 when she started planting shrubs and trees.  She didn't have as much choice as we do today, but she scoured nurseries for plants she wanted.  The smart thing she did was plant a lot of winter-blooming camellias which eventually grew to form the backbone of her 3/4-acre garden.  So, no matter what the season, those dark green leaves made everything else look good.

She knew just where to put the camellias, and she also planted Arum italicum, daphnes and hellebores, as well as ferns that were evergreen (holly fern and autumn fern come to mind).

All the garden writers gravitated toward Margaret in the winter because she had something in bloom every day.  One editor finally asked me not to mention Margaret in every column.  The next thing I knew, he had her on the front of a January issue of the Home & Garden section, showing off her collection of winter-blooming plants.

The above photograph shows how she used a particular camellia (Camellia x 'Taylor's Perfection') - a real jewel of a flower - to mark the beginning of one of her "secret" paths.

I've arrived late to the camellia party.  I have a five-year-old 'Taylor's Perfection', but the deer eat the buds and some of the foliage.  Last year, I put in ten new camellias, and this year I want to plant some more.  So far, there are nice big buds on most of them.  After the rains this weekend, I'm going to get out the deer repellent and see if I can keep up with a regular spraying schedule to get through the season.

Oh, and I must mention that Margaret was still planting camellias well into her 90's.  She says it's never too late to plant something you want.  Every time I go out there, I come home empowered and ready to dig.

Someone last year said, "But think how old you'll be when these bushes are mature."  I guess I'll  follow Margaret's advice:  "Go ahead and plant as many as you can," she says.  "If you're going to live to be that old anyway, you might as well have some camellias to enjoy in winter."