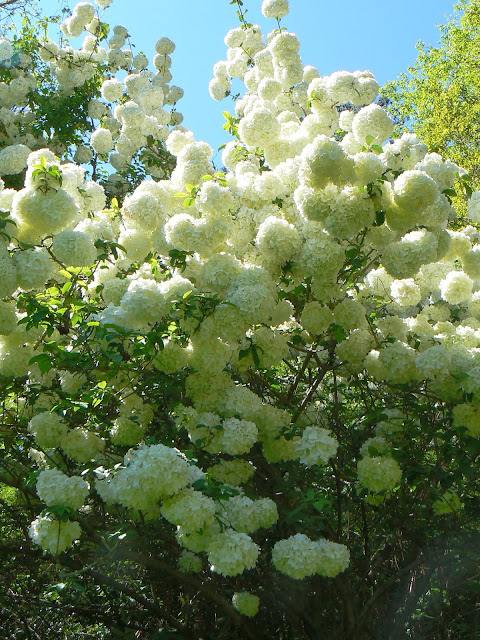 Yesterday, I dropped by one of the big box stores to forage for some Christmas tree trimmings.  I do this every year so I can make a garland for my front staircase.  I don't feel bad, because I buy my Christmas tree there every year.

I still need to plant some pansies or violas for an elderly friend, so I went into the plant section to see if they still have some.  They do.  I really need to get this done next week while we have some good weather.

As I was browsing, I came across several containers of Viburnum macrocephalum.  I rarely see this plant for sale, which I find odd.  It's extremely easy to grow in this area, and the shrub, which can reach the size of a tree, gives you a full month of interest in the spring and can bloom again in the fall.

The giant snowball usually starts forming intense green domes in March.  As time passes, the domes become more rounded and turn to apple green.  Within a couple of weeks, a big, hydrangea-like ball has formed, and the color starts to lighten.  Another week will pass, and the flowers turn a mint green.

Then, by mid-April usually (one never knows these days - could be lots earlier, could be later as happened in 2013), the balls turn snow-white.

I looked at the five gallon containers and thought, "What a bargain."  This time of year, people buy Honey-Baked hams that cost a good $15 more than the $19.95 asking price for some sturdy plants.   The ham is gone within a couple of weeks, but this shrub is very long-lived and blooms reliably.

Here, it is, pictured at the back of Margaret Moseley's east Atlanta garden.  In my book, Margaret Moseley's A Garden to Remember, the shrub is also shown in its rounded, apple green stage, set against a dark green background of Leyland cypress.  The latter is as breathtaking as the white flowers.

Already this season, I have gone shopping and ended up with gifts for myself.  I fear that I am going to go back to the big box store and give myself another Viburnum macrocephalum.  I have plenty of space now, and the deer so far (knock on wood) have not been interested in either the foliage or the flowers.  If Margaret can have several in her garden, I don't see any reason for me to deprive myself of this great beauty, even though the gift won't be obvious until spring.