This fall day and the geese overhead 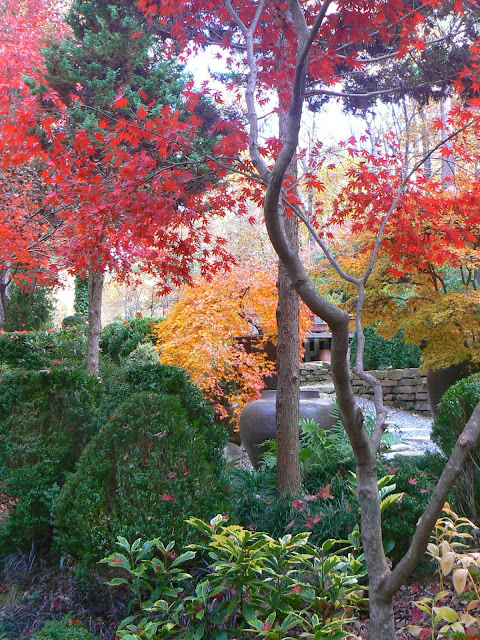 It started this morning when I turned the TV on.  The channel was set on HBO, and there was a documentary about Pakistani women who had been mutilated by their husbands or other men who had thrown acid in their faces.  I should have changed over to watch the comedy shows I record to avoid the news.

But, I watched the whole thing, and that sort of set the mood for the day.  Then, other news came.  A friend's cancer had come back.  Another was struggling as a caregiver for a spouse, and I could tell was feeling overwhelmed.  I talked at length to someone worried about an alcohol problem in the family.  It sounded so hopeless.

It did help to go to church and do some decorating for a luncheon tomorrow.  My cohorts Peggy and Benjie laughed as I hoisted myself up onto a precarious ledge (above a fish pond) to steal some oakleaf hydrangea leaves.  Peggy took a picture with her phone camera.  I had on all black and looked like the thief that I was.  Committing a petty crime in the columbarium, the sacred resting place where I may be someday, was probably not a good idea.

In the afternoon, I was hit with a fit of nostalgia.  I had the TV on while I was doing some catch-up work.  The sound of the football game (am I imagining that Southern college games sound different from Northern ones?) between Tennessee and Auburn reminded me of autumns gone by.  I walked outside.  It was cold and cloudy, and some scent of fall carried me back to Vanderbilt.  I realized how safe I had felt there, and how much hope you always had for the future when you were nineteen.

Back in the kitchen, I looked out the window and thought how my own life had taken such an unexpected turn.  Just then, a big flock of geese flew over in a perfect V formation.  We never had Canada geese growing up, so I don't know how that contributed to my nostalgia.  Maybe I just felt a tinge of sadness at the beauty of it all, of how the leaves drifted down, the colors in the forest.

Tonight, I started looking at photographs from other autumns (like the one above, taken in an Atlanta garden), which cheered me up immensely.  A friend sent a reassuring e-mail.  And then - maybe I dreamed this - I heard an announcer on the television say that Vanderbilt had beaten Florida.  The day has ended on a good note, after all.